The brawl allegedly took place on Monday evening just as Temple Bar's famous establishments were getting ready to close for the night. 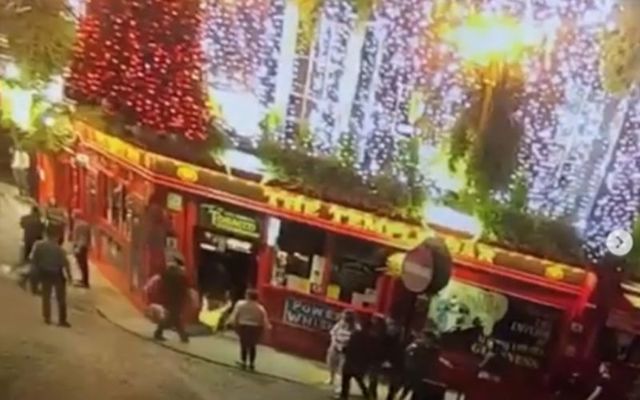 Still from footage of an apparent brawl between teen skateboarders and adult bar staff in Temple Bar on Monday. Eoin Riogh Twitter

The fight reportedly took place outside the Temple Bar pub on Temple Lane on Monday evening just as pubs were preparing to close for the evening.

One Instagram post claims that the two teen skateboarders were just 14 and 16 years old and further alleged that the two teenagers were hit, dragged, kicked, and man-handled by the bar staff at the famous Dublin pub.

Evan Fogarty, who posted the footage on Instagram, alleged that the fight broke out after bar staff laughed at the two teenagers for using skateboards. The two teens allegedly took offense to the insult and answered back to the bar staff, resulting in the violent brawl.

He said that one member of staff hurled an ashtray at the teenagers, while he also alleged that one teenager was dragged inside the pub and assaulted.

"It’s one thing hitting a Child but Kicking them while they're on the ground before dragging them into the pub for a hiding," Fogarty wrote on Instagram alongside footage of the incident which appears to show one man aim a kick at a skateboarder while he is prone on the ground.

An Garda Síochána is currently conducting inquiries into the matter.

"Gardaí are aware of a video circulating on social media of an incident in the Dublin 2 area," a Garda press officer said.

"Gardaí are conducting inquiries into this matter at this time."

On Thursday, protesters gathered outside of The Temple Bar demanding an apology from the staff. Fogarty was involved in organizing the protest.

“Come out and say sorry” outside The Temple Bar pub.

The nicest protest of all time. pic.twitter.com/hZcBliOaO4