When will the anti-LGBT wackos learn?

Last week's decision to block a group of LGBT military veterans from the South Boston St. Patrick’s Day parade was the last dying kick of the old and bitter guard of Irish Americans. 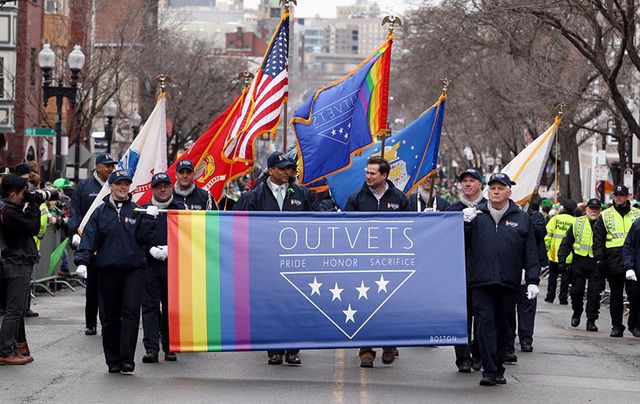 The original decision last week to block OutVets, the group comprised of LGBT military veterans, from the South Boston St. Patrick’s Day parade on March 19 was the last dying kick of the old and bitter guard of Irish Americans who think exclusion is a good idea.

Excluding men and women who have donned the uniform of their country and fought for it is an incredible insult.  Were they any less brave, any less patriotic, any less human because of their identity as LGBT military members?  Of course not.

Opponents of LGBT participation in the parades are like Japanese soldiers who refused to surrender at the end of World War II and kept fighting for decades from isolated positions.

This fight has been won. There’s no question.   The Boston and New York St. Patrick’s Day parades should be part of the usual historical progression, but Boston organizers, Canute-like, tried to turn back the tide.

At least New York learned the lesson well under an enlightened leadership in 2015. Would I be so remiss to wonder if such a slate of new and progressive leaders could also take charge in Southie?

They are so out of touch with how younger generations think about inclusion that they look almost quaint in their thunderous objections.

Laughably their objection was to the rainbow flag, a clear indication that every sign showing a rainbow leading to a leprechaun’s pot of gold and a Lucky Charms ad with a rainbow should be banned immediately.

The reaction to last week’s ban was quick and heartening.  Major sponsors pulled their support, and younger veterans who were not consulted on the decision made their voices heard.

The Irish American community in Boston made it clear they did not approve as Mayor Marty Walsh and a glut of Irish American politicians such as Congressman Joe Kennedy said the flag of bigotry would not fly.

Irish American politicians turning down an invite to march in a parade in Boston is as rare as a three dollar bill. But these pols were not having it.

“I will not tolerate discrimination in our city of any form,” Walsh said. “I will not be marching in the parade unless this is resolved. Anyone who values what our city stands for should do the same.”

Those were strong words and a needed wake-up call for those who banned the LGBT marchers.  The Walsh reaction begs the question -- what on earth were organizers thinking with their initial decision to block OutVets, especially as the group had already marched in 2015 and 2016?

Perhaps the ghost of the former organizer John “Wacko” Hurley, who long blocked gays in the parade because they were spreading  “a message contrary to family values,” loomed over the decision making.

Wacko, like his New York counterpart John Dunleavy, was never for turning until the bulldozer called modern reality steamrolled over them.  Wacko has passed and Dunleavy is on the sidelines now, clear testament that times change.

Someone forgot to tell the Boston St. Patrick’s Day parade organizers, though, and they put their feet in the muck with an audible squelch.

At least the mistake has been redressed, which is progress in itself, but quite why it was necessary to ban OutVets in the first place remains an utter mystery.

But the decision has been reversed, support for the parade has been restored and the storied Southie march will proceed as it always should have – with a space for everyone.