"Our grandparents’ generation didn’t see “many sides” to the Nazi menace. They saw their side and they saw Adolf Hitler’s and they picked one, that is all." 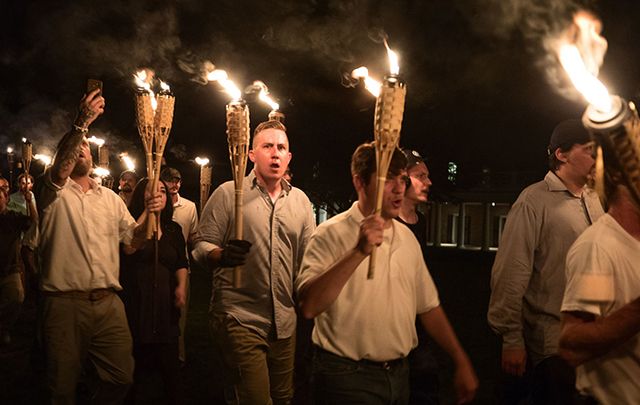 There are not sides: Still from Vice's footage of neo-Nazi's marching in Virginia. Vice

"Our grandparents’ generation didn’t see “many sides” to the Nazi menace. They saw their side and they saw Adolf Hitler’s and they picked one, that is all"

When terrorists attack in other countries, Donald Trump immediately takes to Twitter to denounce them and then to compliment himself for his own wisdom.

No one is a bigger fan of his “get tough” talk than Trump.  “We need the courts to give us back our rights. We need the travel ban as an extra level of safety!” he has tweeted.

Trump is always first to the post when an ISIS terrorist attacks occurs, but this week he demonstrated he has remarkably little to say when it’s Muslim centers here in the U.S that are being attacked or bombed (he hasn’t addressed this anywhere), or when our homegrown neo-Nazis and white supremacists attack and kill their fellow their U.S. citizens on our own soil.

Pressured into condemning these domestic terrorists, Trump hesitated for hours on Saturday and then eventually claimed there were “many sides” to the Charlottesville attacks.

Really? Our grandparents’ generation didn’t see “many sides” to the Nazi menace. They saw their side and they saw Adolf Hitler’s and they picked one, that is all.

So why was Trump so reluctant to call evil by its name?  These were white supremacists and neo-Nazis and this was clearly domestic terrorism. How could it be controversial to say so?

Former Vice President Joe Biden put it simply, tweeting, “There is only one side.”

On Saturday a car driven by a white supremacist plowed into a crowd of anti-Nazi demonstrators, killing 32-year-old Heather Heyer and injuring many.  Trump’s response was to denounce “hatred, bigotry and violence on many sides, on many sides.”

In fact, just like in World War II, there were only two sides in Charlottesville this weekend. There were the Nazis, white supremacists and the KKK and there were the counter-protestors, who arrived to tell all the fascist blow-ins invading their city to get stuffed.  Trump apparently saw no distinction between them, which should alarm us all.

On Monday, facing extraordinary pressure to denounce these murderous Nazis who brought mayhem to the streets, Trump spoke slowly and dispassionately for two minutes like a hostage talking under duress.

The tepid speech was crafted to allow him cover to make the claim that nothing he said would ever be enough. Predictably Trump later tweeted just that claim and then for good measure re-Tweeted one of the far right figureheads behind the ludicrous “Pizzagate” conspiracy theory.

By doing so critics contend he sent a wink to his most ardent far right supporters that said, they made me do it, it was just politics, I’ve still got your back.

Over the weekend the founder of the Daily Stormer, a neo-Nazi and white supremacist website, celebrated the fact that Trump “outright refused to disavow" the white nationalist rally and their movement.

“He refused to even mention anything to do with us. When reporters were screaming at him about White nationalism he just walked out of the room,” the website founder wrote.

“Trump comments were good,” said another Daily Stormer commenter. “He didn't attack us. He just said the nation should come together. Nothing specific against us. He said that we need to study why people are so angry, and implied that there was hate... on both sides! So he implied the anti-fascists are haters.”

The Nazi site Daily Stormer, formerly of godaddy, kicked off of google, is now being hosted in Russia, in case it needed to be more obvious.

Our grandparents’ generation knew there weren’t “many sides” to the Nazi menace. Last weekend they must have wondered why they participated in D-Day and the Allied landings to drive the Nazis out, now that the president of the United States of America was condemning “all sides” in the never-ending fight against fascism.

“I believe we’re at a pivotal movement here, one where the forces of hatred in this country are feeling unfettered to act and emboldened to move out of the shadows,” Jonathan Greenblatt, CEO of the Anti-Defamation League, told reporters. He called Trump’s failure to adequately confront those forces a “serial issue” as a candidate and as president.”

Nazis are walking our streets now, armed to the teeth, attacking and even killing people, unafraid to show their faces.  Meanwhile Trump is teaching Americans there are “many sides” to the white supremacist issue.

He’s also teaching us “what about-ism,” the old Soviet propaganda response to undermine every rights abuse claim. Each week we are being fed a slightly larger dose of horror.

Could it be an inoculation? Could those burning Tiki torches be lighting the way?

Jewish-American WWII veteran Si Spiegel says Trump's words are an appeal to hatred. Si says he fought the #Nazis once, and he’d do it again. pic.twitter.com/vNkD3YiK0s