Nearly sixty years ago, one of the wildest phenomena of the 20th century hit Dublin... a revolution named The Beatles! 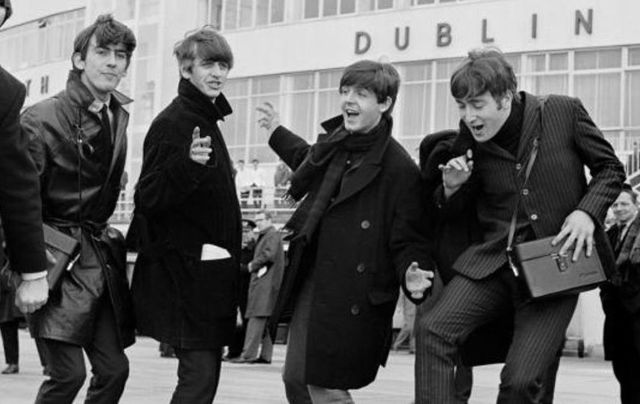 The Beatles arrive at Dublin airport in 1963. nli

On November 7, 1963, one of the wildest phenomena of the 20th century hit Dublin, a Liverpudlian revolution named The Beatles!

Today if you wander the streets of Dublin, you will find a plaque at the site of the event - the Adelphi Cinema on Middle Abbey Street.

The tribute honors a world-changing British rock and roll group who the columnist Quidnunc in The Irish Times described as “four hairy youngsters. [They] appeared onstage to be greeted with shrieks and whistles. Three of them walloped electric guitars which appeared to be amplified to the decibel limit, the fourth walloped a set of drums.

“They all opened their mouths and made noises that sounded to me like: ‘Mew; Me-oh, me-ooh, me-ooh-ooh!’”

The Beatles plaque has been unveiled on Middle Abbey St. by @LordMayorDublin & @gay_byrne drop by and take a look! #Beatles pic.twitter.com/SG0kicZBfK

The Beatles had come to town for two sold-out shows at the Adelphi. Ireland would never be quite the same again.

What was significant was that it was young girls who were screaming their heads off, crying, and scratching to get near and touch the Beatles.  Female sexuality was a completely new phenomenon in Holy Catholic Ireland.

What happened in Dublin was a riot. The 3,000 pumped-up crowd for the first show came streaming out only to run full tilt into the 3,000-second show patrons. Neither crowd gave way, and pushing and shoving ensued.  Then it turned nasty.

A commotion described as a riot took place. The Irish Times lead ran:

“Many arrested as city crowds run riot. Cars were overturned in Abbey Street and O’Connell Street, at least 50 people were treated for minor injuries, while three people were taken to hospital with fractured legs and arms."

A young man was also hospitalized after being stabbed. Two hundred police and three fire brigades arrived.  Buses and taxis were halted in the melee.

Only the ringing of the fire bells seemed to settle down the crowd, but soon more crowds arrived and fights began anew.

The Beatles did not hang around. John, Paul, George, and Ringo escaped in a newspaper van to the nearby Gresham Hotel. Later, two of them went to Drumcondra to see relatives.

The Irish Times reviewer at the gig could hear nothing but the sound of “ecstatic, joyful, hysteric, demented” screams from Dublin teenagers.  He wrote:

“A pity, this, because the Beatles, in spite of their theatrical gimmicks, their long locks, and ‘with-it’ suits, have a great act…God knows, Dublin has never seen anything like the Beatles.”

Indeed they had not. Nor would they ever see their likes again. Despite their multiple Irish connections, the four lads would never be back, and more’s the pity.

Here's a short clip of the Beatles performance in Dublin, in 1963:

If there was one band in the world you could see live would it be The Beatles? Let us know in the comments section below.