Sean Spicer, a chara. I felt it was appropriate under the circumstances to begin this tribute to you in Tweet format since the world now knows this is the fashion in which you are usually communicated with by a noble POTUS whom you are serving with equal nobility as his spokesman. 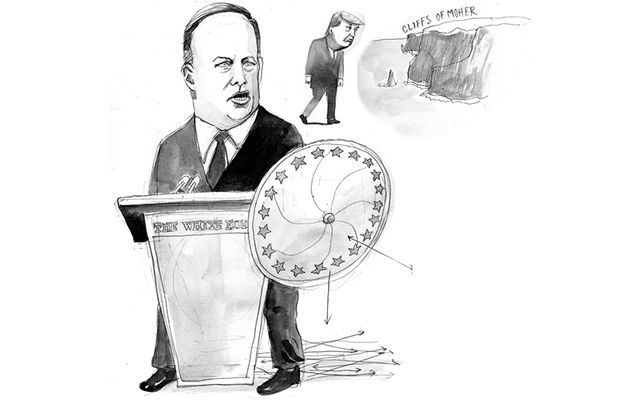 “@REAL CORMACMACCONNELL: THE WITCH HUNT AND FAKE NEWS TSUNAMI AGAINST ME IS FAILING BECAUSE OF THE WORK AND LOYALTY OF SEAN SPICER. I LOVE SEAN SPICER. HE IS A PATRIOT. NOW THE FAKE NEWS MEDIA HAVE LAUNCHED A WITCH HUNT AGAINST HIM PERSONALLY. I WILL PROTECT HIM TOTALLY. TOGETHER WE WILL MAKE AMERICA GREAT AGAIN IN THE END.”

Sean Spicer, a chara. I felt it was appropriate under the circumstances to begin this tribute to you in Tweet format since the world now knows this is the fashion in which you are usually communicated with by a noble POTUS whom you are serving with equal nobility as his spokesman.

I am not one of the slavering rat pack over there biting away at both of you every day. I am a simple old hack on the Wild Atlantic Way of the Emerald Isle wishing to praise you to the blue skies for the brave manner in which you have deflected the hideously heavy fire against your great POTUS since he entered the White House.

History will eventually rate your POTUS as perhaps the greatest and most imaginative leader of your young nation to date. History will also eventually recognize the role you played in protecting his brave breast from all the slings and fake arrows of the print rat pack in these critical first few months of office.

You have been absolutely brilliant. Your richly eloquent mute tactics at press conferences totally defused the sharpest questions day after day. Brilliant altogether! And even better, when necessary, when dealing with issues like Russian cyber attacks and the Comey firing and the Flynn brouhaha and suchlike has been your incredible sleight-of-tonguery. Unmatched! I wish I had your gift.

Sean, despite your best efforts, the storm is far from abating. I note that the popularity ratings of your noble POTUS are very low because of the spate of fake news. Is it an American weakness not to recognize true greatness and intellect when it appears before their eyes?

Witness that magnificent stroke of genius by your POTUS last week when, in relation to the Mexican wall, he announced that his idea was to equip it with solar panels so that it would pay for itself and provide energy for Americans at the same time! Genius, pure genius!

It becomes his hallmark. His billionaire brain is so far ahead of the posse stranded in what he calls, properly, the Washington Swamp.

Now, Sean, according to whispers from good sources which have reached me, it is highly likely that the device which your noble POTUS will use to protect you from the rat pack in the near future will confound them entirely. They expect demotion or, perhaps, sideways promotion out of the line of fire. They cannot decipher his lightning-fast mental strategies at all at all.

I believe the whispers reaching me that, rather than being demoted or promoted in any fashion, that you, in a platinum plan of action, will instead be remoted safely as your POTUS’s trusty ambassador to the remote Emerald Isle. I expect to hear that officially confirmed any day now.

Incredibly, the way I am trying to fathom out the possible strands of thought in the gingery head of your POTUS, it may well be the case he is so far ahead of the aforementioned posse that he already sees your Irish role could be invaluable to his future plans.

You see, Sean, the Mexican wall and the furor about that matter obscured the problems relating to another wall which your wise and gifted POTUS wishes to erect in Ireland on the edge of the Wild Atlantic Way in the county of Clare where I myself now reside.

You may not know that he owns a huge golf resort hotel and links in a village called Doonbeg. It is already yielding him millions in income and is expected to generate even more provided he can get permission to erect a wall around his links to halt ongoing erosion.

That permission has thus far been halted by these accursed environmentalists that are causing trouble everywhere. A willing ambassador with your mighty skills could be worth his weight in gold on that front. Just a thought. POTUS is by far the biggest employer in Doonbeg, and the canny folk there know that.

He was feted hugely when he visited some years ago to view his investment. The red carpet was laid with a will, colleens danced high and lively, pipes swirled and bands played. A real shindig it was for sure. He loved every minute.

And therein, Sean, emerges a potential problem down the road. With you gone from his side in the Washington Swamp and the dreadful attacks continuing unabated, even talk of impeachment from the rat pack, it is possible that your POTUS will be tempted to escape to Doonbeg sometime soon for a well-earned rest and round of golf. And there is a dreadful risk on the edge of that scenario not just for America but for the whole free world which will then be heavily dependent on your genius POTUS. I want to warn you about that. We all know how energetic and active your POTUS is in the dawns of his life. That is when the majority of those gifted tweets are generated.

If he is in Doonbeg, dear Sean, in the rich sea air of the Wild Atlantic Way, there is a real risk that he will give his security lads the slip some morning and drive alone the very short distance to our majestic tourist attraction the Cliffs of Moher.

YOU MUST PREVENT THAT AT ALL COSTS ANY WAY YOU CAN!!!!!!!!! The dreadful truth is that the awesome and truly terrible beauty of the Cliffs of Moher, in some fashion beyond my ken, have led to them becoming the most lethal suicide spot in Ireland. I am constantly warning my readers here not to visit if they are either in very high or very low form at the time, and to keep a very close eye on all members of their party during their visit. A person loses their life at the Cliffs about every second week -- another body was recovered just days ago -- and, truly, nobody knows exactly how they will be affected by the awesome seascape of Moher. Please be aware of that. Good luck.