It seems incomprehensible that the choir which played as part of Riverdance's first performance is not getting the support it deserves. 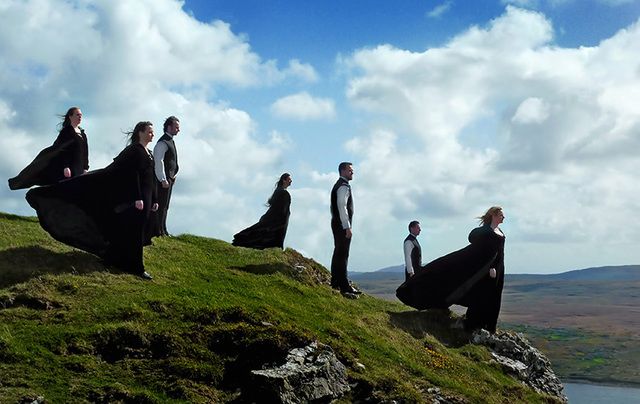 When Riverdance burst onto our television screens at the 1994 Eurovision Song Contest it was introduced by a striking choral ensemble called Anuna, originally founded by composer Michael McGlynn in 1987.

The theatrical style and the remarkable vocal harmonies of the unmistakably Irish group riveted the whole of Europe from the first moment they appeared, making what was planned as a splashy intermission one of the high-water mark cultural events of the 1990s. We knew instantly they were something special.

This year is Anuna’s 30th anniversary, but as is still occasionally the case in Ireland, it may take the country just a little longer to really appreciate the scale of their unique contribution.

“It’s amazing how much resolve it takes to keep something like this going,” McGlynn tells the Irish Voice. “But I’ve never known anything else.”

Anuna has survived this long because it has tapped into something very deep in Irish culture, critics contend. Their music is like a royal road into and out of the Irish tradition, the past and the future.

Other cultures immediately pick up on it. There is something distinct and unmistakably pure in what the group does, marrying tradition to modernity in a way that is unlike any other Irish singing group.

“When I was 10 I spent a year in the Gaeltacht and became aware of my own culture for the first time,” says McGlynn. “I came back fluent in Irish and filled with the ancient sean nos songs and the traditions of the language associated with them. I think that experience formed the basis of Anuna.”

Choral music is not an indigenous form in Ireland, so Anuna had to create a tradition of people singing together. There was no real template, except for the work of other countries.

First McGlynn decided to wed the medieval choral tradition to the Irish one. The he brought the Irish passion for self-expression and storytelling to the enterprise (what is a sean nos song but the telling of a story and the conveying of information, after all?).

It started with the transformational presidency of Mary Robinson, then it took flight with a new generation of award winning writers, then Riverdance happened and then the Celtic Tiger kicked into gear. The country was winning awards in exciting new fields, the peace process succeeded. It was an extraordinary moment, a transitional one in fact.

“Why have I never been asked this before? You’re absolutely right. To grow up through that period, because I was in my twenties and I was seven years working with Anuna by then, was very exciting. I remember very clearly thinking that our traditions could be powerful and contemporary in their own right,” McGlynn said.

Two years after Riverdance, Michael Flatly unwisely swapped Anuna for some high-kicking Vegas lounge-act shenanigans, in a real sense betraying what was essential for what was simply familiar.  Broadway and big bucks beckoned, but at a cost to the essence of the event itself.

“It’s distressing to me to find that choral music in Ireland is close to the same place it was at when I first set up Anuna to reform it. We should have been a massively transformational group in Ireland, we should have changed the perception of choral music, but we didn’t,” McGlynn offers.

What happened instead is that Anuna changed the perception of choral music everywhere else.  When people listen to them abroad they say, that’s Irish choral music. But in Ireland Irish choral groups now ignore their achievements.

The last time Anuna toured the U.S. was in 2007. It seems incomprehensible that a group this distinctively Irish can’t get the booking and support they deserve here. McGlynn, after all, is a very well known and respected choral composer in the U.S.

Watching the group pushed aside, it’s contributions overlooked, and bookings dwindle, finally culminating last year during the 2016 centenary without an invite to a single commemorative event was tough, McGlynn admits.

“We were not invited to participate in any event at all last year, and this year is the 100th anniversary of the death of Irish poet Francis Ledwidge. I have been writing about him since 1997; we have a repertoire of material,” McGlynn explains.

“ It’s very unlikely that we will be asked to perform, however. It’s not deliberate -- we’re just not relevant. People can’t see why they would want us to involve us.”

Making the same calculation as Michael Flatley and swapping out what is important for what is popular, we have overlooked the achievements of this singularly talented choral group. It’s time we invited them back center stage. Where they lead, great things have always followed.

* To mark Anuna's 30th Anniversary they've released three new albums comprising of tracks recorded throughout the full life of the group. All tracks are either new recordings or remastered.

Available on CD and for digital download on BANDCAMP here
on Spotify, or via iTunes.