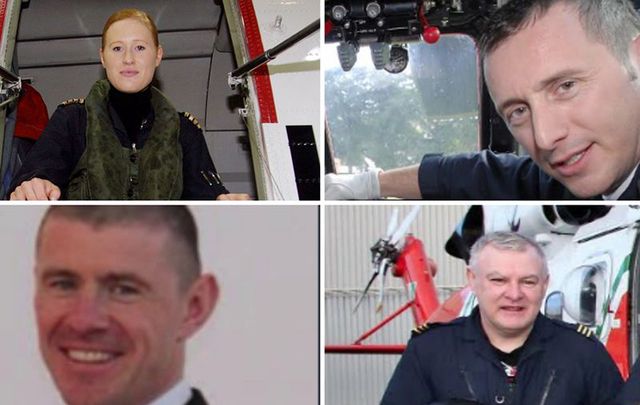 Updated 9:00AM EST: The search continues for the three missing crew from the Coast Guard helicopter, Rescue 116. On Wednesday, the wreckage of the chopper was discovered in the Atlantic Ocean, around 40 meters below the surface, off County Mayo.

Declan Geoghan, of the Irish Coast Guard, told BreakingNews.ie weather conditions appear to be good today. The rescue mission’s main concern continues to the recovery of the missing crew.

On Wednesday, a remote-control vehicle, ROVer, found the underwater wreckage of Rescue 116. It is thought that the bodies of the three coast guard members could be on board.

The Irish Coast Guard helicopter that crashed and cost four lives while supporting a medical evacuation off the coast of Mayo last week was responding to a relatively minor injury.

As female Captain Dara Fitzpatrick, 45, was buried on Saturday, the Irish Coast Guard confirmed her helicopter was one of two on the way to a British fishing vessel 150 miles off the Mayo coast for an emergency evacuation of an injured fisherman. The fisherman had a severed thumb injury that was not life threatening but needed prompt medical attention due to the risk of septicaemia.

A Sligo-based helicopter, callsign Rescue 116, answered the emergency call for the return long-distance flight on which it was required to have communications and backup support.

The Irish Times reported that when the Air Corps was not able to provide “top cover” or support for the long-range mission, a request was issued for a second helicopter.

Rescue 116 was dispatched from Dublin with Fitzpatrick and Captain Mark Duffy flying, along with crew members Paul Ormsby and Ciaran Smith.

As it approached Blacksod, Co. Mayo to refuel before heading out into the Atlantic it vanished without warning.

Wreckage of the U.S.-made Sikorsky S-92A helicopter was later recovered near isolated Black Rock.  Fitzpatrick was rescued but she died in hospital the same day.

The bodies of her three crew members are still missing and bad weather has affected the search.

Air Accident investigators say the tail of the helicopter struck rocks on Black Rock island off the north Mayo coast before it crashed, but the multi-purpose flight recorder has yet to be recovered from the seabed.

In his homily, Father Andrew O’ Sullivan said, "Dara’s tragic death has stunned all of us gathered here this morning. In particular, it has created a deep void in the lives of her loving family who are truly heartbroken. The reality of death with all its pain and sense of terrible loss, confronts us at this moment."