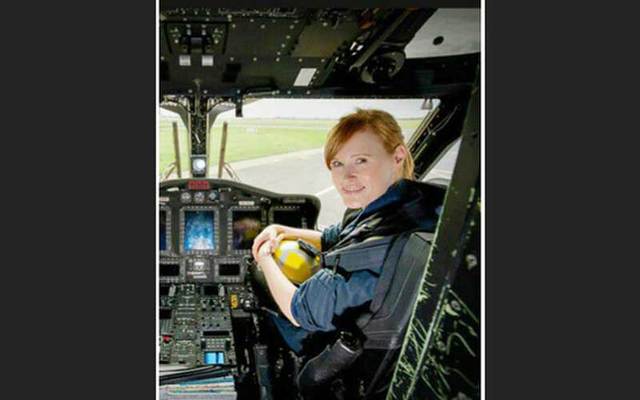 A funeral was held in Dublin on Saturday for Captain Dara Fitzpatrick, who died after helicopter Rescue 116 crashed off the Mayo coast. Irish Coast Guard / RollingNews.ie

Hundreds of mourners gathered at St Patrick’s Church in Glencullen, Co Dublin, on Saturday for the funeral of Irish Coast Guard Captain Dara Fitzpatrick, who died in a helicopter crash during a rescue mission last week.

The 45-year-old from Kilternan, Dublin, and three of her colleagues died after Coastguard Rescue 116 helicopter crashed off the coast of Blacksod, Mayo, on Tuesday.

The funeral cortege arrived at 11am on Saturday and was met by an honor guard from the Coast Guard and other rescue services, the Irish Independent reports. In tribute to their fallen colleague, Rescue 117 did a flyby over the church.

Fitpatrick's parents, four siblings, her three-year-old son Fionn, and other family members accompanied the coffin into the church.

President Michael D Higgins and Taoiseach Enda Kenny were among those who attended the funeral mass.

In his homily, Fr. Andrew O’ Sullivan said: "Dara’s tragic death has stunned all of us gathered here this morning. In particular, it has created a deep void in the lives of her loving family who are truly heartbroken. The reality of death with all its pain and sense of terrible loss, confronts us at this moment."

He said Captain Fitzpatrick and her missing colleagues were heroes: "We are expressing gratitude to the Fitzpatrick family for moulding Dara into that wonderful young woman and mother that she was. Over the last few days many stories have been told about Dara and how she was a wonderful colleague and friend and indeed of the incredible professionalism and bravery of those in the coastguard and in our emergency services. How these extraordinary people put their own lives at risk in order to save others – what bravery. And they truly are heroes."

He said: "Dara loved traveling and had so many adventures. She was not only a professional and talented pilot and excelled in what she did, but also, a great horsewoman, she loved donkeys; a hillwalker and an adventurer.

"Dara was quite shy and she hated 'small talk.' She was kind to her core and a champion of the underdog. She was fiercely loyal and her family was of paramount importance to her…. Her family describe her sense of humour as “goofy” and she had a great ability to find the fun in life. I know today, that Dara’s family take great consolation in the fact that she lived life to the full – she packed a lot in.

"Dara loved to cook and as her sisters say - she was a feeder – she made a mean chocolate roulade for her work colleagues and for home. Dara loved her clothes and most especially her Gucci boots and her Tom Ford perfume. As her family put it: a beautiful young woman, who of course, got her looks from her family.

"The day Dara formally adopted Fionn was one of the happiest days of her life and that of her family. Fionn, now embodies Dara’s characteristics of family – he loves to and often instigates the family group hug – Dara adored Fionn."

Captain Dara Fitzpatrick was picked up early Tuesday morning off the Co. Mayo coast by a lifeboat but was in critical condition and died in the hospital later that day.

The search continues for the fallen aircraft and the bodies of the three missing crewmen Mark Duffy, Ciarán Smith and Paul Ormsby. Wreckage was located in the search area about five miles off Blacksod lighthouse in north Mayo.