One crew member was recovered in critical condition and later died, the search continues for her three other crew members and the helicopter wreckage. 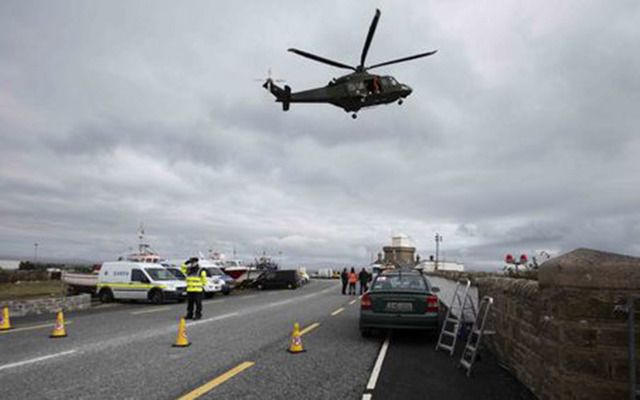 Irish Coast Guard is searching for the wreckage of a helicopter which went missing over the Atlantic during a rescue mission, as hope wanes for three of its crew members.

One crew member, Captain Dara Fitzpatrick, of the air and sea rescue helicopter 116, was picked up at first light on Tuesday off the Co. Mayo coast by a lifeboat but was in critical condition and died in hospital later that day.

Captain Dara Fitzpatrick (45), the first confirmed casualty of the crash of helicopter Rescue 116 off the Mayo coast. Searches are ongoing for other crew-members. Photograph: Irish Coast Guard / RollingNews.ie

Wreckage was located in the search area about five miles off Blacksod lighthouse in north Mayo.

As the search continued for the other three crew-members of the helicopter which went missing around 1 a.m. on Tuesday, Paul Ormsby, Ciaran Smith and Captain Mark Duffy.

Winch operator Paul Ormsby, who was member of the crash of helicopter Rescue 116 off the Mayo coast. Searches are ongoing for other crew-members. Photograph: Irish Coast Guard / RollingNews.ie

All were attached to a Dublin-based helicopter which had flown from the capital to join a rescue helicopter from Sligo that was responding to a distress call from a British-registered fishing vessel about 250 miles off the west coast.

At 12:45 a.m. the Coast Guard last heard from the Dublin helicopter to say it was making its approach to Blacksod to refuel before heading out into the Atlantic to carry out its role as the “chase” helicopter.

Winchman Ciaran Smith, who was member of the crash of helicopter Rescue 116 off the Mayo coast. Searches are ongoing for other crew-members. Photograph: Irish Coast Guard / RollingNews.ie

The Coast Guard called a mayday after the helicopter, which was being traced using a sophisticated tracking system, “just went off the screen.”

Coast Guard acting director Eugene Clonan said sea conditions were rough at the time and visibility was not good.

Other coast guard helicopters and RNLI lifeboats, as well as a number of local fishing vessels and garda divers are participating in the search.

Captain Mark Duffy, who was member of the crash of helicopter Rescue 116 off the Mayo coast. Searches are ongoing for other crew-members. Photograph: Irish Coast Guard / RollingNews.ie

Transport Minister Shane Ross said he wished to express his “sincere support and sympathies for all those involved, particularly those family members awaiting news of their loved ones.”

At the scene of search operations on the pier at Blacksod Bay, he met with families and spoke to the heroism and great sacrifice of the crew members.

"The idea that people whose purpose in life, whose motivation in life, was to save people have lost their lives themselves makes it all the more poignant. These people have saved some people’s lives in the past and have now lost their own. It’s a tragedy."

Emergency Service activity day two at the search scene for three missing members of the Irish Coast Guard whose helicopter crashed while on a rescue mission off County Mayo. Photo shows Ministers Shane Ross and Kevin (Boxer Moran) speaking to the media after arriving at the scene.

Key to determining what happened to rescue chopper 116 will be the two black boxes which record crew conversation and technical operations. A signal from one of them was detected earlier today.

Captain Fitzpatrick, who previously featured in an RTE documentary that described her as “one of only a handful of female civilian rescue pilots in the world,” leaves behind her family and a three-year-old son.

“On behalf of the people of Ireland, may I pay tribute to Captain Dara Fitzpatrick who died today.

“We are grateful for the courage, resolution and exemplary commitment to the aims of the Coast Guard that Captain Fitzpatrick and her colleagues have consistently displayed.

"My thoughts are with her family at this difficult moment and also with the families of the missing crew.

“It is appropriate that we acknowledge and pay tribute to the efforts of her colleagues at the Coast Guard who have been working at a time, which must be for them, a time of great grief and uncertainty.”