In Ireland, the county you are from is of vital importance

As all of you with Irish blood in your veins know well, the county identity is powerfully, deeply implanted in the marrow. 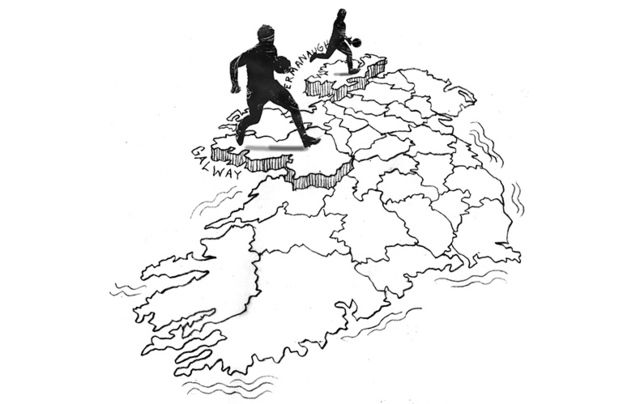 Irish Americans are touched by the desire to discover their ancestral homes, to somehow link up with Irish relations, however distant. Caty Bartholomew

After Galway's hurlers won the first big title game of this new season by hammering All-Ireland champions Tipperary in the league decider, all of my adult children telephoned me inside the hour and they were all gloating.

"Dad,” they said, “you being from poor Fermanagh that never wins any GAA title at all, you would have no idea how happy and excited we are. We are sorry for you today so we are.”

That was the gist of all their messages, and I must confess that I loved them all less at the end of the evening than I did that morning. As all of you with Irish blood in your veins know well, the county identity is powerfully, deeply implanted in the marrow.

My three sons and daughter are fortunate to have been bred and born in Galway and to have been raised in Barna on the edge of Connemara.  They are all immensely proud of their county, especially in relation to the GAA sporting triumphs such as that which exploded across the national TV screens lately when Galway's hurlers demolished the All-Ireland champions in the league final and, accordingly, set themselves up for a good run at championship glory in Croke Park next autumn.

Read more: Why I decided to come home to Ireland

I will never forget how jealous I was when I brought them into Galway City as young children to welcome home a Galway team which were bringing home the Sam Maguire trophy for the first time in some years. Watching their delighted little faces, I was so sad that, most likely, I will never in my life be in the same position.

My poor Fermanagh, for example, have never even won an Ulster senior football title, never mind an All-Ireland crown. That hurts to the bone, and that is why I am suffering sorely these spring days.

Forgetting that for the moment, is it not intriguing in this modern era how the county identities connected with Ireland are still so strong?  They are defined in a sporting context about every weekend, both here and abroad through the diaspora, but the reality, I think, is infinitely wider than that across all the social and economic scales.

I am often struck by the knowledge which visiting Irish Americans have gleaned about their Irish backgrounds.  Most of them know that, for example, their grandfather emigrated to New York or Boston from Donegal or Kerry or Wexford, and their grandmother originally hailed from Mayo or Limerick.

When I talk to them too I am touched by their frequent desire to discover the very townlands from which their ancestors fled in the past because, maybe, of the Famine, and the common hunger after all these years, to somehow link up with Irish relations, however distant.

That is truly touching because we homesters, for whatever reason, do not have the same hunger at all, and most of us would find it difficult to trace our family back more than two or three generations.  We kinda know who we are, the good and bad of our breed, and live comfortably enough with that reality.

Read More: What people in Ireland misunderstand about Irish Americans

However, I would argue strongly that county identities are still hugely important in Irish life and living. I think we base many of our judgments on folk based on their county of birth. I know I certainly do and, as a journalist, that strange gut instinct has served me well in my work down the years.

Regular readers will know that I am very much on my guard any time I have to visit Mayo and Cavan. That view is based on hard experience gleaned from all the occasions in which I have been outsmarted and "used" in these counties.

At the same time I freely concede that in the wider world none of our emigrants, from any county, have fared so well, socially and indeed economically, as emigrants from Mayo and Cavan. And these canny and shrewd folk thrive very well in modern Ireland too for that matter.

Take, for example, the situation of Mayo-born Taoiseach Enda Kenny.  For a variety of political reasons his Fine Gael party are pressuring him to resign before the next general election.  He has made it clear that he will go only in his own time of choosing and, so far, his opponents inside his own party have been unable to lay a glove on him.

I have to admire that resilience and hardiness. I would expect nothing less from a Mayo man and I predict here and now that, when he does lay down his leadership role in Ireland, he will instantly step into an even bigger and lucrative job, perhaps in the top echelon of the European Parliament. Watch the headlines on that one.

I think it was the English, during their occupation of this island, who defined the county boundaries of the island. It was coincidental and fortunate that the Gaelic Athletic Association, when it was founded, followed those existing county boundaries and, in this way, grafted the sporting colors on to the counties who, annually, from this month onwards, and because of the GAA, magically enough push politics and economics and the stresses of surviving on to the sidelines of our days.

What is happening in the political corridors of power, for all of this summer, will never be as compellingly important as what is going to happen in Croke Park next September. Despite having to suffer sorely from the gloating of my Galwegian brood, I am very happy about that at a deeper level.

Which county's blood flows in your veins today?

Read more: How I became a real Irish American and not just in name