Daniel James Brown’s book "The Boys in the Boat" looks at the boys who made Hitler doubt the "master race." 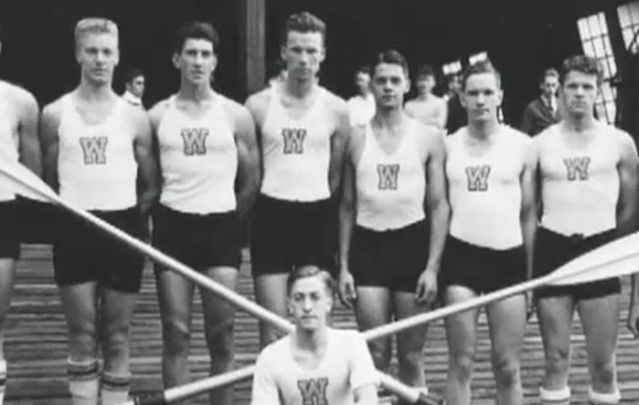 The University of Washington rowing team from the 1936 Olympics. Wikimedia

As of October 2016, "The Boys in the Boat" has been in the The New York Times best-seller list for non-fiction for 121 weeks. "The Boys in the Boat" is a story in the tradition of Laura Hillenbrand’s best-seller Unbroken. Both explore characters who overcame adversity to experience Olympic glory. One of the so-called “boys in the boat” is described by author Daniel James Brown as “Irish American through and through.” His name was Chuck Day, one of eight college students from the University of Washington who went on to compete in the 1936 Olympics.

Those, of course, were one of the most controversial -- and to many, infamous -- Olympic games of the 20th century. The 1936 Games took place in Berlin. German Chancellor Adolf Hitler believed the exhibition would thrust Germany to the center of the world stage.

Of course, Hitler had already initiated his “master plan” and had started persecuting minorities, most infamously Jews. Hitler did his best to hide any evidence of his evil doings while the world’s top athletes converged on Berlin.

Perhaps the most memorable moments from the 1936 Olympics were when African American runner Jessie Owens won several gold medals. This seemed a clear rejection of Hitler’s premise that white Aryans were superior when it came to everything from brains to athletics.

Less well-known, of course, was the story of the University of Washington rowing team.

On the surface, this is not exactly an epic story. Rowing is not what many people think of when they think about a compelling spectator sport.

But Brown makes an important point by using Hitler and the 1936 Olympics as a backdrop. Not only did it seem as if Hitler might try and take over the world. Hitler felt he could -- and should -- do so because Germans were the “master race.”

And who were the Americans going to send to compete against these well-trained Aryans? A team consisting mainly of lower- and working-class kids from the bland environs of Washington State. These were, by and large, sons of farmers and lumberjacks, whose modest livings were decimated by the Great Depression.

There was Joe Rantz, who was left by his family to raise himself at the age of 15.

“You're pretty much all grown up now anyway,” his grandmother told him.

Not surprisingly, Rantz grew up distrustful, unwilling to believe anybody would want to work together to achieve a common goal. Then there was the Irish American Day.

Now there is another Irish boy in the boat. Published reports have said that Belfast native Kenneth Branagh is going to direct a planned big-screen adaptation of Brown’s book.

Brown met Rantz’s daughter at a homeowner’s association meeting a few years back. Rantz was in the last days of his life but wanted to meet Brown. When Brown heard Rantz’ story of how he overcame poverty and obscurity to become a champion rower and eventually an Olympian, he believed he had a best-seller on his hands.

At the center of the book are the 8 “boys” who learned how to work as a team. It’s a clear metaphor for a nation that was down on its luck and needed to come together if it was going to overcome the adversity of the Great Depression. Rantz teamed up with Day, who was described as “quick-tempered” but also “an emotional spark plug.”

Brown credits the team’s Coach Al Ulbrickon, the ninth American of the title, for putting together a team of diverse personalities which brought out the best in all team members.

The performance of the rowing team also foreshadowed what would happen by 1941, when America had to come together for a different reason -- to fight Germany and the Axis powers in World War II.

Fittingly, in the race for the gold medal, the Americans faced a tight race against not only Germany but its ally, Italy. The “boys” ultimately nabbed the gold.

Most of the boys remained friends for life, except, sadly, for the Irish-American Day, who died of lung cancer before he turned 50. The success of Brown’s book -- and the forthcoming movie -- is a testament to Day’s memorable accomplishment.