After a triumphant return to its transformed new theater and gallery space, the Irish Repertory Theatre has been presenting back-to-back critical and commercial hits, and this month is no different. CAHIR O’DOHERTY reports on two new summer shows you should not miss. 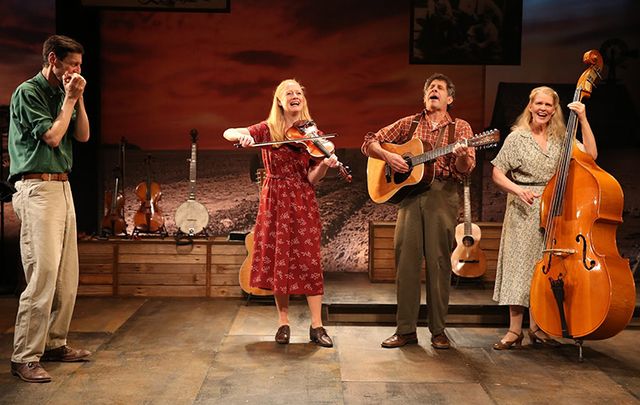 After a triumphant return to its transformed new theater and gallery space, the Irish Repertory Theatre has been presenting back-to-back critical and commercial hits, and this month is no different. CAHIR O’DOHERTY reports on two new summer shows you should not miss.

Feeling anxious about the state of the nation? Wondering where this new era of tax cuts for the rich versus a bill of goods for the poor is leading us? You’re not alone. What’s happening now has happened before to our grandparents’ generation, who had it even tougher actually, and one man was present at the scene of the crime to raise his voice in protest, writing unforgettable folk songs about what he saw that have been handed down reverentially to our own time.

Woody Sez, the Life and Music of Woody Guthrie is so much more than a workmanlike recitation of the biographical facts of its storied subject’s brilliant life as a songwriter -- it’s also that rare thing, a perfectly realized work of art.

Guthrie is best remembered now as one of the great American folk singers, and his life grey mirrors some of the most significant social challenges of the 20th century in the U.S. But, crucially, he had lived almost everything he wrote about, so his lines rang true to anyone who listened because they came directly from his life. Not a political writer so much as a writer who lived through times of massive political upheaval, his experiences became his subject.

The great fight of Guthrie’s life was against oppression of every kind, against all who would strive to take away our freedoms, so he was an American in the truest and most admirable sense.

The Rep’s uncanny ability to pick productions that speak to our own moment in time has rarely felt this on the nose. Partly it’s the production, which as story, song and play is impressively flawless, and partly it’s the work of the gifted onstage performers, who inhabit each character with a conviction born of an encyclopedic knowledge of their achievements and times. It’s both bracing and powerfully restorative to hear Guthrie’s great songs and the triumphs and tragedies of his life on the road recited onstage in this inspirational production.

Devised by David M. Lutken with Nick Corley and Darcie Deaville, Helen Jean Russell and Andy Tierstein, the production, which Corley directs, powers ahead like a freight train bound for glory and never misses a beat. It’s important to underline how rare this is, and how glorious, to witness a song and spoken word production achieving an ideal marriage of form and content, sight and sound.

Lutken inhabits his subject in a work of near magic, allowing us to understand his inner struggles and the ideals that drove him on. The profound understanding of Guthrie’s songs, life and times as well as his achievement are just the starting point of this perfect production.

First and foremost Woody Sez wants to delight you with music to salve your spirits and set your toes tapping.

What drives this brilliantly told story of the rise and fall of an elusive American Dream is passion for justice and, underneath that, a quiet anger. This land may have been made for you and me, but it increasingly feels like the game is rigged, and Guthrie could see that fact clearer than anyone. Each performer onstage is also an accomplished singer and musician, so Woody Sez presents us with an embarrassment of riches right from the outset.

So good are they in each aspect of their work onstage that it almost disarms criticism. When performers are this multifaceted, presenting a show this perfectly pitched, there’s not much left to do but be utterly enchanted, and this I assure you that you will be for the two hours or so (with intermission) of the show’s run time. Woody Sez began its life as part of the Edinburgh Festival Fringe in 2007 and since that time it has clearly been a labor of love for its core creative team.

A decade later it’s become one of the most enlivening nights in the theater you will ever have the good fortune to experience. Lutken gives a performance as the title character that in a perfect world should win him a Tony. Playing Guthrie with a magician’s facility, when he recalls the tragic early death of his “stackabones” daughter his face falls in a way that only a parent facing an insurmountable grief could. It’s one moment of transcendence in a production that’s utterly filled with them.

Andy Tierstein is terrific as Luken’s friend and comic foil. He can play every instrument he picks up including spoons on the knees of the startled first audience row, eliciting howls of laughter. Megan Loomis is perfectly cast in her ensemble roles and is as gifted a musician as she is an actress. Helen Jean Russell rounds out the talented cast, bringing vocal harmonics to her impressive work as musician and actor.

Do yourself an enormous favor and make every effort to get to this show now. It will cure what ails you through its full-throated recitation of what it has meant, and what it still means, to be an American.

Downstairs in the Rep’s second stage the great discovery of playwright J.M. Synge’s life, The Aran Islands, is brought to life in actor Brendan Conroy’s play inspired by Synge’s diary. It was Ireland in miniature he quickly realized, and because of its isolation it had retained a connection to its traditions, customs and language that was both ancient and undiminished. Surrounded by the sea and sometimes vanquished by it, the islanders had a dark fatalism that astounded the playwright, who felt himself connecting to something rich and strange, invigorating him personally and creatively.

Like the mainland Irish the islanders lived much of their lives in fear of fate, which they mostly considered malign. Synge did not make them heroic figures, nor did he mythologize their hard lives as was often the fashion of the period. Instead he simply got out of their way and let them express themselves, then he wrote down all he had heard.

As Conroy reminds us in his one man show, Synge enriched world literature by taking his perilous trip to the islands. It was an all too rare encounter between a perfectly preserved way of life and a nature that was ideally constructed to appreciate it.

Some have seen echoes of Synge’s work in the more recent plays of Martin McDonagh, but The Aran Islands reminds us that that comparison doesn’t really withstand much scrutiny. McDonagh’s call and response pantomimes have none of the thematic richness of Synge, nor his insight or generosity, nor his ability to see what’s in front of him independent of what he thinks about it.

Samuel Beckett called Synge’s play Riders to the Sea, his favorite in the English language. Conroy reminds us of Synge’s stature as a world class playwright and in a real sense he also reminds us that after Brian Friel and Tom Murphy, we haven’t really seen an Irish playwright of that stature in quite a few decades now.

For tickets and showtimes to both shows, visit www.irishrep.org