Sinead O’Connor is back to doing what she does best – singing – and she’s loving every minute of it. 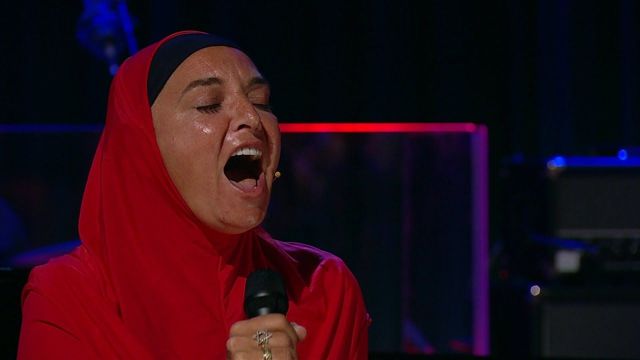 Sinead O’Connor is back to doing what she does best – singing – and she’s loving every minute of it. And the good news for her U.S.-based fans is that she’ll be here next year for a whole bunch of shows.

Sinead’s new tour got underway in Galway last week, and the Irish Independent’s Barry Egan said she killed it for the 90 minutes she was on stage. “Hearing her sing ‘Black Boys On Mopeds,’ ‘The Emperor's New Clothes,’ ‘The Last Day of Our Acquaintance,’ ‘Jealous, and, of course, ‘Nothing Compares 2 U’ was as emotional and therapeutic for the audience last night as it was for Sinead maybe.

“Sinead performed these songs like her very life depended on it. You wouldn't be overstating it, to say that Sinead sang her heart out because she simply doesn't know any other way,” Egan reported.

Things seem to be really looking up for Sinead, who’s had a rough few years dealing with her mental health and family issues. Converting to Islam seems to have given her a sense of peace.

And as for being on stage again after such a long time away? “OMG that was fun !!! And ... for the first time since I was about sixteen a man bought me chocolate ! The man working in the garage ... he paid for my chocolate ! OMG!!!! Thanks to audience for being so amazing : ) and thanks to my band for same : ),” she tweeted after the show.

Brilliant fun again tonight in Roisin Dubh. Thanks to the fantastic audience and to all at RD. And of course to my amazing band

Sinead’s Twitter handle -- @MagdaDavitt77 – contains all kinds of random thoughts from the singer. If you care to know, she’s got all of her Christmas shopping already completed, she wished “a massive RIP” to the late Congressman Elijah Cummings, and said of Bette Midler, “How dearly I love this woman can not be described” while re-tweeting one of Bette’s slams of President Trump. (For sure, Sinead isn’t a Trump fan.)

Sinead wraps up her Irish tour in November, takes a three-month break and returns to Vancouver on February 1 to kick off her North American gigs. She’s all around the U.S. and Canada until April 16 when she’ll play the last of her three shows at City Winery in New York. Those tickets aren’t on sale yet; they’ll probably go quickly when they’re available.

Will you be going to see Sinead O'Connor live? Let us know in the comments section below.

Read more:  An Irish Mammy, the luck of the Irish, and the Beatles