“Silent Night Christmas in the Trenches 1915” a holiday chart-topper? 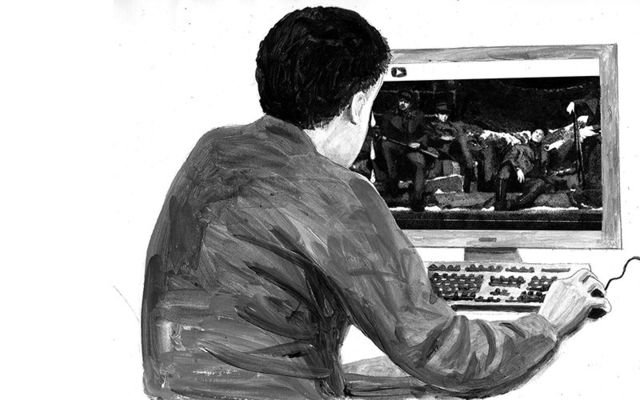 Warm greetings from a chilly Clare with the winter solstice biting at us already and only a thin sliver of moon away above Lough Derg and the Shannon.  But never mind that at all because I have an amazing and heartwarming yarn for ye, no matter where you are reading this, and I hope ye relish the details.

Myself, I’m quite blown away by recent internet developments in this new Ireland which, by the minute and hour, are seeing my turkey and fatted calf being delivered weeks before the ritual bells begin to jingle and jangle.

In a walnut shell, what happened over the last couple of weeks is that a video recording appeared on Facebook (which I fear and avoid myself by the way) and it features the splendid group Celtic Thunder, all uniformed for the First World War period of our history, giving their rousing and touching rendering of “Silent Night Christmas in the Trenches 1915” which I wrote nearly 30 years ago, one of the only two songs I’ve written that I’m genuinely proud of.

Legend has it that on Christmas Day 1915, soldiers from both sides of the trenches in World War One met up in No-Man's-Land for a game of football (Soccar for you Americans ;) ... On Christmas Day, after some shouting between both trenches, he and his colleagues got out of their icy trench and greeted the Germans.

I’ve produced a fair few maudlin yokes that I prefer to forget. But we’ll forget about these for the moment p, ease.

Anyway, when living briefly in Corofin in North Clare I gave the song to my good friend PJ Curtis of that parish who was then putting down an album for his nephew Jerry Lynch of the famed Kilfenora musical clan down the road a few miles.  For my taste, Jerry’s lovely rendering of the song is far and away the best of the many versions recorded since then by many top artists.

However, because of the commemoration excitements currently running high everywhere about the war, it is a fact that the Celtic Thunder version has, as they say nowadays, gone viral. Who would have believed it could happen.

There have been millions of viewings up to the time of writing this and thousands of comments pouring in by the minute, from all over the world, but especially from the United Kingdom, and the general opinion is powerfully put that my old turkey of a song should be placed at Number One on the charts for this Christmas!!!

Folk are writing that they are weeping as they hear Celtic Thunder in full tone and can barely listen to the end of their version. This feeling is especially potent among the too many families right across Europe who lost family members, often only teenagers, in that dreadfully bloody encounter which, as we all know claimed many thousands of Irish lives. May they all now rest in the peace of the other dimension towards which we are all bound.

In Ireland, the anti-war song has always been popular on the Christmas airwaves and I have always felt proud to hear it there, especially Jerry’s version. I’ve been even more delighted to be in a bar singsong where folk did not know me, and to hear some local singer giving it an outing. That is a special feeling altogether for sure.

But to learn of the song’s special viral reaction globally this Christmas season is quite astounding.  It leads me back to the Corofin cottage moment when PJ, the noted musicologist, put on a resigned face when I told him I had composed a song which might suit his nephew’s album.

I sang it publicly to him for the first time and when I concluded he said he wanted it yesterday. And the rest is what they now call a developing story is it not? We reside in an incredibly complex world.

I hereby faithfully and fully promise that, even if I am eventually able to claim a Christmas Number One in the charts of Europe, I will not go strutting around the world in a fashion above my station.  I will never abandon this special space for as long as my fingers are capable of sending yarns from Clare to Debbie and Caty and yourselves wherever you are.

In the meantime, can I suggest that those of you infinitely more capable of navigating the internet than I am look up the Celtic Thunder rendering of a peace song on Facebook or wherever ye find it [see above]. Hopefully, it will be a worthwhile trip down memory lane. It would seem to be a good idea, too, judging from the comments to date, to have a handkerchief readily available during the session!

That’s it for now. Can I please head up the hill above the Newline here in Killaloe for a libation in Bernie and Willie Walsh’s pub under that silvery moon? I might even be tempted to sing a song before the night is over. Guess which one!