Scary immigrants in the United States - then and now

"William Burke came from Galway to kill Americans. It’s as simple as that." 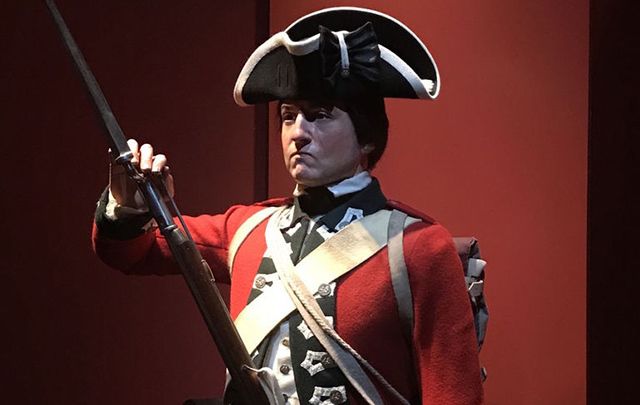 William Burke came from Galway to kill Americans. Museum of the American Revolution.

William Burke came from Galway to kill Americans.   It’s as simple as that.

This week, we again gathered around the barbecue and celebrated the Fourth of July. It may have been a more uncomfortable Independence Day than usual.

You know, the whole thing about the country being split right down the middle.  Some people are sick and tired of all these damn immigrants.  Some people just can’t understand the big fuss.

And what exactly is the president’s strange obsession with women and their blood?

Anyway, if you set aside that messy business, you might also have noticed last week that the U.S. Supreme Court temporarily upheld parts of the Trump administration’s so-called “travel ban.” This means that, for now, the president can implement restrictions on travel and immigration from six majority-Muslim nations.  In the fall, the Supreme Court will look more closely at whether or not the ban in actually constitutional.

Also, the White House, on the lookout for illegal immigrant voter fraud, requested a bunch of sensitive voting data from states, and got a big thumbs down.

Either way, it’s clear we are living in a time when people are scared of immigrants.

Some of this fear is understandable.  Some of it is baseless and bigoted.  What we should know is that such fear is nothing new.

This country was founded at a time of feverish fear that outsiders would spoil the paradise the founders created.  The founders themselves could not stop bickering about the role immigrants would play in this grand American experiment.

Which brings us back to Burke, who is featured in the brand new Museum of the American Revolution, which opened a few months back in Philadelphia.

Burke was born a Catholic, in Galway, and later joined the British military just as the American colonists were rebelling against the Brits.  He was sent to the states just after the Boston Tea Party to put these angry colonists back in their rightful place.

Of course, after much speechifying and bloodshed, Burke’s side lost.  The American colonists got their freedom; the Brits lost their prized colony.

Which, of course, is not the end of the story.  Many folks would have you believe Washington, Adams, Jefferson and all those dudes in wigs just loved each other.  Not so.

Once they were done bickering with the Brits they very quickly got to bickering amongst themselves.  Burke was there for all of this.  He ended up publishing a memoir which is available online -- thank you, Google Books -- that provides a vivid snapshot of life in America right after the Revolution.

Because, believe it or not, this guy who once fought against the American colonists actually ended up spending his life in this new place called America.  Not only that, he was accused of being a spy, spent time in jail, and fell into a “habit of excessive drinking,” until he was “reproved by pious friends.”

At the same time, America was experiencing some serious growing pains.  The founders didn’t think their new nation actually needed a president or any kind of federal government.  Big mistake.  So they went back to the drawing board and recruited Washington to run the show.

But Jefferson and his pals -- the opposition faction who came to be known as Democratic-Republicans -- came to view Washington’s party as too kingly.  The Jeffersonians accused the Federalists of forgetting the little people, and they looked admiringly to France and Ireland which were brewing their own revolutions in the 1790s.

So what did the Federalists do?  They went and targeted the French and Irish already living in America, passing the Alien and Sedition Acts, which among other things, made it a lot harder for immigrants to vote.

Eventually, the Federalist Party faded away.  And amidst all that, guess who stayed in America?

William Burke.  He died in Connecticut at the age of 84.