Santa Claus has nothing on my Sandy at Christmas

"Nobody shopping for children’s presents... will be able to buy as useful a gift for a family as Sandy’s Christmas boxes away back then." 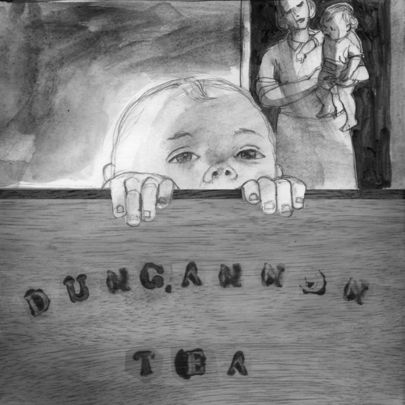 Sandy Christmas boxes were so special. they even acted as a playpen for toddlers! Caty Bartholomew

As the oncoming festive season already begins to tincture about every area of life and living over here, there is a buzz in the air, especially in the shopping malls where the most astute shoppers are already buying Christmas presents for friends and family before the real rush kicks in.

It starts earlier and earlier each passing year, doesn’t it?  I presume it is the same over there.

Those of you born in Ireland know that we always spoke about Christmas boxes rather than Christmas presents and that it was ritual, especially in the rural areas and the smaller towns and villages, for local shopkeepers to thank their regular customers in the week before Christmas with a so-called Christmas box.  It was expected by both parties in a different era in a totally different Ireland.

My lovely father Sandy was one such country shopkeeper. When I reflect on the festive seasons of my childhood nowadays I think I can honestly claim that three of the Christmas boxes which Sandy presented to his customers each year were extremely thoughtful, poignant to remember now, and almost worth their weight in gold to those who received them as ye will hear.

The story is that Sandy operated the little country shop in Belnaleck which was attached to the gable end of our home.  Remember we are in the six counties up in Fermanagh and the trading reality was that his customers were almost exclusively his Catholic neighbors and friends.

The Protestant community traded in the larger Protestant shop a mile away which was also the post office and two or three staff.  That was the way things were.

Sandy was so famed for the quality of the tea that he sold in those years that he even attracted some Protestant custom.  Nobody drank coffee in those days of the forties and fifties.

There were no teabags either. The tea was loose tea which arrived in our shop in plywood tea chests. There was still rationing in those post-war years so it was sold by the quarter pound in brown paper bags.

Sandy got his special stock from a dapper trader called Larry Fox from Dungannon, and the quality of that tea was the highest available. It was much better, said everybody, than what one could buy in the Protestant shop or even in the town of Enniskillen five miles away.  Many’s the paper bag of it I filled when helping Sandy behind the high wooden counter.

Getting back to the gifts at Christmas. All the regular customers got a Christmas box and expected to get one.

Typically the customer would receive a currant cake or a sweet cake of some kind, chocolates for the woman of the house, strong round white mints for the grannies, and other items tailored to the normal needs of that household.

Electricity had not yet reached Belnaleck so the gift might include a spare silken kind of mantle for the Tilley lamps which illuminated the homes, or perhaps even a gallon of paraffin oil for those still using the old-style oil lamps.  And maybe a plug of hard tobacco for the pipe smoking granda of the home.

Practical gifts for practical people in hard times was the foundation stock of those Christmas boxes.

I said above that Sandy was famed for his tea.  By the end of each year he would have sold two or three chests of the Dungannon tea. The emptied plywood teachests were carefully kept in the small store attached to the shop.

I recall that there was always Indian language writing on the flanks of them and they were lined with silvery tinfoil. Sandy might use them for storage purposes at other times of the year in his busy little shop, but they were always emptied out and well cleaned as Christmas approached and there was a good reason for that.

The Catholics were the minority community, as ye know, and did not have equality across the scale of Ulster life in relation to job opportunities and related benefits. Their farms were smaller and poorer than those of the descendants of the original planters.

The Catholic Church’s dictats also meant that, denied contraception on pain of mortal sin, that their families were extremely large in many cases.  Ten children and more were common under many rooves because of that.

Sandy would know who among his regular customers had most recently had a new baby in the cradle.  He would also have known the family circumstances of all his regulars. And that was why two or three of his Christmas boxes were special indeed.

And they were really precious Christmas boxes because, in a matter of a few months, when the toddler phase began in crowded farmhouse kitchens, they served as playpens for the little ones. I saw many of them used for that purpose when I was a boy and the mothers were delighted to have them for sure.

Nobody shopping for children’s presents this December on either side of the Atlantic will be able to buy as useful a gift for a family as Sandy’s Christmas boxes away back then.

Santa must have been proud of my father. I surely am now.