Trailblazing boxer Sean Mannion's epic story the stuff of Hollywood movies, but it all really happened - check out the documentary Rocky Ros Muc. 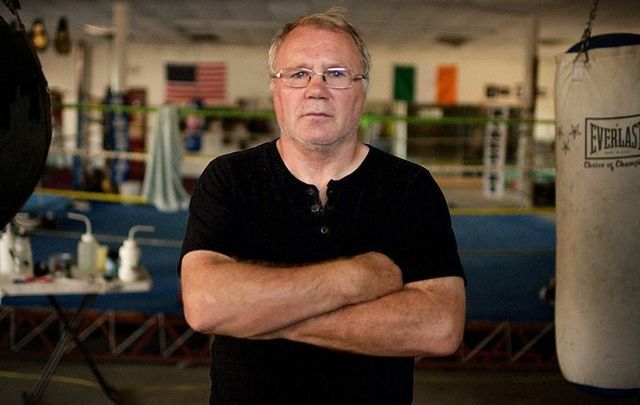 Trailblazing boxer Sean Mannion's epic story of growing up in an Irish-speaking village in Connemara in the 1970s to eventually competing for the World Boxing Association title in Madison Square Gardens sounds like the stuff of Hollywood movies, but it all really happened. Rocky Ros Muc, a brilliant new documentary from director Michael Fanning (produced by Máire Bhreathnach) shows us how Mannion's rise fed the sporting fantasies of the Irish American community in which he lived. Cahir O'Doherty speaks to Fanning about emigration, hardship and dedication to a dream.

For over 200 years now every village in Ireland has supplied America with an endless crop of new boxing heroes, national politicians and -- if we're being brutally honest -- the odd career criminal.

It's an impressive resume for an Irish-speaking backwater that's still so remote in 2017 that the government often forgets it exists. But the person who really put Ros Muc on the map is perhaps the most retiring lad who ever grew up in it, the gifted boxer Sean Mannion, now 61.

Born in Ros Muc, population 450, in 1956, Mannion grew up in the heart of the Connemara Gaeltacht, where his ancestors have lived since the fourth century. What makes Fanning's new account of his sporting life so compelling is that he understands just how deeply rooted Mannion is in his home place, and in the Irish language, and among the people of his remote but beautiful district.

Understanding this is the key to understanding Mannion's later achievements as a boxer and why he continually put his tribe and his homeland above all other considerations. Because Rocky Ros Muc is not just a portrait of boxer Sean Mannion: it's also a portrait of the contribution the Irish have made and are still making to America.

“I suppose from the moment I first heard Sean Mannion's story, incredible as it was in terms of his achievement in boxing, the more I realized it allows us to tell a much wider story,” Fanning tells the Irish Voice.

“It begins as a story about a boxer but there is so much more to the community and the characters, that allow us to tell a much broader story about immigration and the Irish experience.”

Director Michael Fanning's new film is a profound meditation on the Irish and emigration.

Mannion was in one sense one of the last of the Mohicans. The kind of emigrant’s journey he made to America in the mid-1970s can no longer be made.

First of all, most of his Irish speaking community had already made the voyage to Boston before him, so he was arriving to the warm embrace of the already hermetically sealed Irish bubble town of Southie in Boston.

In the 1970s Mannion could still travel back and forth between the U.S. and Connemara when he needed with a smile and a nod. Nowadays that freedom is no longer an option, because he'd quickly be pulled into the Homeland Security office to have his passport and his visa scrutinized, and most probably be turned back with a 10-year bar.

If there's a quietly elegiac feeling to the last moments of Rocky Ros Muc now it's because that awareness, that the roads that had once been open to the Irish have now closed, haunts the edges of the screen.

“I'm not a die hard boxing fan myself,” Fanning explains. “What I was keen to do was make sure that other people who aren't boxing fans either would still appreciate the film. It's about Irish identity as much as it is about boxing. The tie with Boston and his community in Connemara was so strong that Sean could go back and forward with ease for years.”

It was like taking the train to and from Dublin, in fact. One of the benefits of that Boston and Galway closeness was that his identity stayed fixed and solid. He spoke as much Irish in Southie as he had in Ros Muc.

Leaving home for America wasn't seen as unusual in the ‘70s.  It was seen as a lifeline.

“It's what you did, you went to America for work and a life. It was part of growing up. And it made them all tighter knit here, because they had all shared the journey. When Sean arrived everyone he knew was already there,” Fanning said.

Life in Southie was far from idyllic, though. New arrivals were often lonely, they had to work hard to keep a roof over their heads, and they often drank to excess to ease the stresses they were facing. It was very far from the American dream.

When Mannion arrived and looked like a contender who could go all the way to a world title, it was no wonder he began to embody the fragile hopes and dreams of the forgotten Irish community he sprang from.

“Ros Muc isn't even a town, it doesn't have a main street.  It's really is as remote a place in Ireland as I have ever been,” says Fanning. “So to come from there and end up in the worlds of politics or crime or international boxing is all part of a remarkable emigration story.”

In his famed boxing matches in the early 1980s Mannion, increasingly a contender for a world title belt, insisted his Irish-speaking brother Paddy was in his corner in the ring. Their language was the connective tissue that linked them both to home, and to their community and loved ones, and Sean wanted it near him more than even his own boxing trainer.

Irish, the film shows us, was a profound reminder of who he was, what he was doing, and who he was doing it for. He kept it close always.

“It's hard for some people to understand,” says Fanning. “But Sean speaks Irish better than he speaks English, it's his first language. It's what kept him grounded. When we filmed the card game they play toward the end of the film they were all suddenly speaking Irish to each other. You could be in Ros Muc until you open the door and see you're in Boston.”

In the early 1980s crime lord Whitey Bulger's crew had flooded Boston's streets with drugs. Some of the key players in his outlaw gang trained at the same gym as Mannion, but they left him alone for a simple reason: he embodied their dreams of sporting glory too.

Sean was something pure, something untouchable.  They all felt it.

Winning fight after fight, against the odds and against all predictions, Mannion showed that the Irish could stand on the world's stage with a new confidence.

“It was all about being Irish, but I don't think he drilled down to say, ‘All these people in my community are benefiting from my progress up the ranks here.’ He just wanted to be world champion from the time he was a kid and this was his chance to do it,” Fanning said.

When the owner of an American company phoned up on the eve of Mannion's world title fight he wanted to place his company's logo on the waistband of his boxing trunks. But Mannion always placed the name of his village there, and he would not hear of changing it at any price.

There are some things that money still can't buy.  For Mannion integrity wasn't for sale. Neither was the name of his hometown or what it meant to him.

By taking his stand he paved the way for other Irish challengers to follow. And in doing so he showed that some heroes stay in the ring until the end.