Queens St. Pat’s For All parade stand in solidarity with Muslim immigrants against Trump 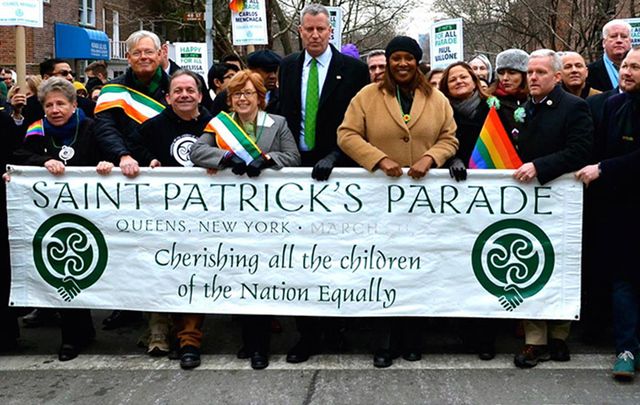 St. Pat's For All, 2016: The 19th annual parade are welcoming participation from a wide array of immigrant groups to show solidarity against President Donald Trump’s travel ban on seven Muslim majority nations.

The 19th annual St. Pat’s for All parade in Sunnyside, Queens will host a record 100-plus marching units this Sunday, March 5, and organizers are welcoming participation from a wide array of immigrant groups to show solidarity against President Donald Trump’s travel ban on seven Muslim majority nations.

“As immigrants Irish people remember our own story as refugees fleeing famine and poverty only to arrive on the shores of the U.S. to encounter prejudice. This experience has shaped our lives and history,” said Brendan Fay, co-chair of St. Pat’s for All.

“As Irish New Yorkers we raise our voices in support and welcome our immigrant and Muslim neighbors most affected by the executive orders from the President Trump administration on refugees from Syria and on visitors from predominantly Muslim countries. Many of the Irish community are offering support to vulnerable communities. As New Yorkers we need each other. We rally together.”

Fay’s co-chair Kathleen Walsh D’Arcy added, “As a child of Irish immigrants, I am very proud of St. Pat's for All.  We have always reached out to all the immigrant groups in Queens and we highlight our shared history of immigration, the joys and the trials of adopting a new country.  This year, we hold hands and embrace the children and families who face threats and discrimination. We march together.”

This year’s parade, which kicks off at 1 p.m. on Skillman Avenue and 43rd Street, will be led by two grand marshals – famed talk show host Phil Donahue, and Anastasia Somoza, the long-time human rights advocate who was widely acclaimed for her opening night speech at last summer’s Democratic convention which took then presidential candidate Trump to task for mocking a disabled reporter.

Among the 100 groups registered are local community Irish organizations, immigrant communities and LBGT groups. There will be pipe bands, puppets, girl scouts, and stilt walkers. Irish groups will include the Shannon Gaels, Irish Arts Center, Irish Repertory Theatre, Origin Theatre, the New York Irish Center, Irish American Writers and Artists and the Brehon Law Society. Sports groups include the New York Cit Shamrocks Soccer Club and the Shannon Gaels GAA.  Among the bands this year are the Co. Cork Pipe Band, the Pipers of the FDNY, the Rude Mechanical orchestra, the Queens-based La Mecigaya Asturian Pipe band and the LGBT Big Apple Band.

LGBT groups include FDNY- FireFlag, Lavender and Green Alliance and the Catholic group Dignity NY. Pride for Youth led by Pete Carney will carry the banner of Robert Rygor, an Irish gay community leader and AIDS activist who died in 1994.

Groups can still register at www.stpatsforall.com.