"Building it will be the easy part of making it an attractive and safe part of Dublin's city center." 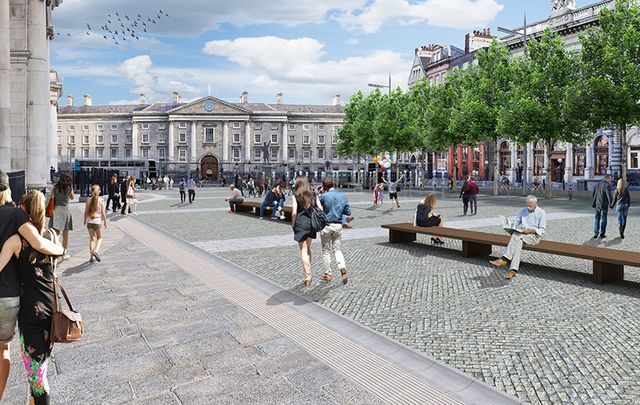 Last week Dublin City Council unveiled its plans for a traffic free public plaza on College Green and Dame Street, opposite the front gates of Trinity College in the city center.   Even if you're not from Dublin you will know the area because it's where a huge crowd gathered to listen to a speech by President Obama back in 2011, a memorable event carried live on TV at home and in the U.S.

The stage Obama spoke from was in front of the Bank of Ireland buildings opposite Trinity, the magnificent Portland stone edifice that housed the Irish Parliament until the Act of Union in 1800.  College Green is a beautiful space of great character, framed by the front of Trinity on one side and the facade of the bank on the other, as well as the old buildings on Dame Street, the wide avenue that leads away from Trinity towards the west.

This sweeping space around College Green and into the first half of Dame Street is the area the council plans to transform into a paved plaza, an oasis of calm free from the traffic that clogs up much of Dublin city center.

It's a perfect place for a spacious pedestrianized public plaza in the city, something that Dublin has always lacked.  At present, public events usually take place on O'Connell Street, but that cannot be pedestrianized since it's the central artery for much of our public transport. 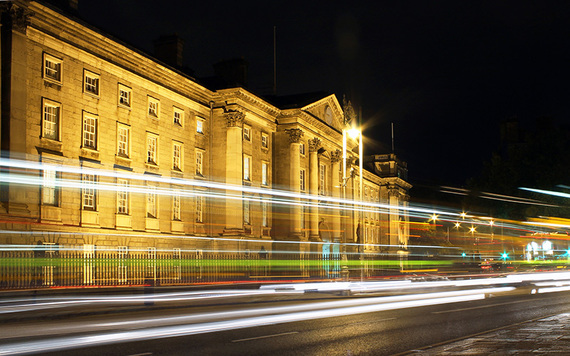 This means that Dublin, despite having an equally graceful architectural heart, lacks something that is common in other European cities.  London has Trafalgar Square, Paris has Place de la Republique, Madrid has Puerta del Sol, and so on.  Dublin has no comparable public space.

But if the council plans revealed last week are approved that will change, and within two or three years Dublin will have its own public plaza in the center of the city.

The architectural plans and the artist's impressions of what the plaza will look like when completed certainly are attractive. The whole area becomes a traffic-free, granite-paved space with cobblestones, trees, benches and mini water fountains which can be turned off when parades and public events are taking place.

To be absolutely accurate it will not be entirely free of traffic since taxis, buses and the new Luas tram line will run in a north-south direction around the front of Trinity at that edge of the plaza.  And cyclists will be allowed in the area but will be confined to a track next to the footpath on the south side of Dame Street (the opposite side to the bank).

But all private cars will be banned and even public transport will not be allowed cross the plaza from College Green into Dame Street.  Buses approaching the plaza from the other end of Dame Street will be routed around a new turning circle and will head back the way they came after dropping off passengers.

The effect will be to create a huge open public space for pedestrians, an area of peace in an increasingly frenetic city. It's in the heart of the tourist area (Trinity is where the Book of Kells is on view) and beside the city's premier shopping in Grafton Street.  It makes sense in every way.

And yet there are doubts.  Businesses in the area are worried about the further reduction of access to the city center for motorists.  It's got to the stage now where it's impossible to drive across the city center.   And not everyone wants to carry bags of bulky shopping home on a crowded bus.

And in fairness to city center businesses, they have been through hell over the past two years as works on the new tramline proceeded.  Streets across the city center have been ripped up and access squeezed off for months on end.

The result has been dirt, fumes, traffic chaos, long tailbacks and many people deciding it's just not worth going into the city any more.  Tourists stumble through it like they have accidentally been dropped off in a war zone.

From the people who brought you Luas lines that don't join up & the Boardwalk Here's #CollegeGreen the perfect spot for antisocial behaviour pic.twitter.com/XCfOFSkE8y

Not unreasonably, city center businesses are now asking why the plaza could not have been done at the same time as the Luas tram works?  Just as the tram works are reaching the final stages, they are now being told there will be another two years of disruption as the plaza is built.

It's the way we do things here -- it takes us ages to decide to do anything, and then we over-design and over-engineer everything so that it takes forever to build and costs the earth.

Plus our planning has been so bad over the years that we don't have a subway and our surface public transport system is hopelessly (and literally) disjointed since parts of it don't join up.  But that tale of woe is for another day.

The other doubt about the wisdom of the new plaza is the fear that we won't run it properly, a reasonable worry when you consider how bad we are at managing the existing smaller public spaces in the city center.  Will the new plaza become another meeting place for beggars, buskers, rough sleepers, junkies, muggers and gangs of drunken teenagers throwing around fast food litter?

It's a reasonable worry given, for example, what has happened to the boardwalk along the Liffey and O'Connell Street.  The Liffey boardwalk was colonized from the beginning by groups of addicts who sleep on the seating in the midday sun or stagger around intimidating tourists.

The boardwalk, along the River Liffey, in Dublin.

O'Connell Street, the nation's most historic and important avenue, has become a no-go area at night for many Dubliners, particularly older folk, put off by the random violence and the threat from muggers, drunks and addicts, as well as the number of beggars and people bedding down in doorways.

It's like the Third World -- and it's got worse rather than better since the traffic on the street was restricted and the whole of O'Connell Street was repaved with much wider footpaths.  The litter everywhere and the staining of the new paving with spilled drinks and gum makes the whole of the street look dirty and unattractive.

The gardai seem unable to exert sufficient control in our existing public spaces in Dublin and in areas like Temple Bar.  Part of the problem is that you can't find them because they are rarely seen out of their patrol cars -- they only seem to react after an incident rather than being a constant on the ground presence to enforce acceptable behavior.

So will it be any different if we get our new public plaza on College Green, a much bigger public area than we have had in Dublin up to now?  Will there be a permanent presence by the gardai there, not in an office but out walking around on the plaza at all times? And will there be prosecutions to stop people littering and staining the granite cobble paving?

If things follow the usual path, we will be given all kinds of assurances on these concerns.  And then nothing will change.

It doesn't mean we should not have a new public plaza on College Green.   But building it will be the easy part of making it an attractive and safe part of Dublin's city center.