The way we coped with the perfect storm in Ireland last week fell into two categories, both of them very Irish... 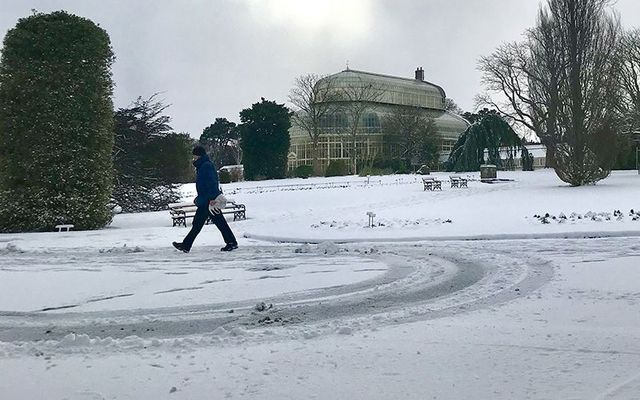 Snow in the Botanic Gardens, in Dublin. RollingNews

The way we coped with the perfect storm in Ireland last week fell into two categories, both of them very Irish.

First off, we exaggerated and panicked as if Armageddon was about to befall us. Then we calmed down and made a joke of the whole thing.

Mind you, for a while it was no laughing matter.  The Beast from the East (a freezing storm force wind from Siberia) was slamming into a moisture laden storm (Storm Emma) which had spiraled up from the south.   As they began to collide over Ireland starting on Wednesday evening last week it kicked off a three-day weather event that dumped feet of snow, produced howling blizzards and below zero temperatures, made many roads impassable, cut off rural homes and villages, knocked out power in some areas and generally made life miserable.

We knew it was coming and we knew it was going to be bad.  From Monday of last week people across the country had been getting ready as the weather forecasters issued increasingly alarmist predictions.

This produced scenes like in a disaster movie with people panic buying bread, milk and other essential supplies (beer and wine?) as the storm approached.  In some areas there were lines of customers outside stores and bare shelves inside where the bread was usually stacked.

By the time the storm hit on Wednesday night the country was going into lockdown. Taoiseach Leo Varadkar had been on TV from the National Emergency Co-ordination Centre (NECC) warning people not to underestimate what was coming.  The entire country was on red alert, the highest level weather warning, meaning conditions would be life threatening.

We were told to go to work on Thursday only if it was essential and to be at home by 4 p.m. and then stay indoors.  No driving, no walking around, we were told.  The safest place was inside.  Schools, stores, public transport, airports, offices, businesses, everything shut down and the streets emptied.

When it arrived (slightly behind schedule) on Wednesday night/Thursday morning and began to intensify, it turned out to be not quite as disastrous as predicted. That was the case for most people in cities and bigger towns, although there were rural villages and isolated cottages which were cut off for days, where the wind piled up the snow on secondary roads into drifts that were eight feet high in places.

The storm lasted for about 36 hours at peak level and then slowly began to peter out, still producing flurries of snow and then sleet, as well as icy temperatures.

So yes, it was bad, but in general it was not quite the national disaster that had been feared.   Local council workers kept main roads open with salt and grit and power crews kept the lights on in most places.

There were some weather-related accidents and emergency services were busy rescuing old folk who had been cut off, babies who wanted to be born and some people trapped in cars.  But Armageddon it was not.

When it was all over, there was a sense that maybe we had over-reacted a tad. We can handle endless rain here, but when it comes to snow we tend to become a nation of snowflakes.  And jokers, of course.

The panic buying of bread produced a social media storm of joke tweets, videos and memes, my favorite of which was the one about crowds of people going to Mass to get their hands on communion wafers for ham sandwiches.

Brennans Bread, the country's iconic white sliced pan, got acres of free publicity on line, with loaves being offered for sale for hundreds of euros. Ryanair, as usual, got in on the act with ads that said "Shops may be sold out of bread but we're not sold out of flights --deals you knead, for not a lot of dough."

Even the endless doom-laden press conferences from the NECC were the butt of jokes.   Which is not surprising, since they were conducted with the solemnity of funeral services as though we were on the verge of national disaster.

There was more than a suspicion that a lot of it was the government (particularly the taoiseach and the minister for planning) trying to look good, while the emergency services were out there getting on with doing what they are supposed to do.

In fairness, one laudable thing that was organized was extra emergency accommodation for rough sleepers, with over 100 beds provided in one center in Dublin and outreach teams on the streets to bring in the vulnerable from doorways and squats.  And it was not just beds that were provided --- the rough sleepers were encouraged to stay for the duration of the storm, with food and medical/social care on hand all day.  At the worst of the storm, almost all the beds were filled.

Aside from all the Brennans Bread jokes and the funny videos of people holding parties in igloos they had built or skiing in their underwear, there was a more serious side to the event.  What the storm crisis also produced was a lot of questioning about our ability to cope.

A Nation of Snowflakes was the line used in derisory on-line comments which bemoaned the way a storm -- even a big storm like this was -- shuts the country down and turns us into scaredy cats.  Instead of being ready and knowing how to manage, we do little in advance and then exaggerate the danger and panic.

It's like a national meltdown.  And it's not helped by the top brass from the government, army, police, Coast Guard and other emergency services holding melodramatic press conferences at the NECC telling us it's going to be bad out there.

Some of the New Irish -- the Poles, Latvians, etc. who now live here -- were on TV during the storm with bemused expressions talking about how they have weather like this in their home countries for weeks on end and everybody just gets on with it and the whole place does not shut down.

It was the same with perplexed would-be travelers at Dublin Airport trying to get home to the U.S. and Canada and finding that their flights were cancelled because there were a few inches of snow on the runway.  They said that back home planes fly and airports continue to function in much worse weather.  Where were the snow plows and de-icers?

Down in Waterford a TV news crew found groups of American tourists rambling around the streets as the storm arrived on Wednesday afternoon.  No one else was out, but they appeared to be having a ball.  We have this historic city to ourselves, they said. We don't mind the weather.  We get much worse than this at home.

One revealing fact to emerge was that more flights were being cancelled at Dublin Airport than at Heathrow in London, one of the biggest airports in the world. It seemed to sum up our inability to cope with extreme weather events without shutting down the country.

The manager of one Dublin city center hotel complained that the streets were choked with snow for far too long after the storm hit.  He pointed out that in cities in the U.S., plows would be out clearing the streets and businesses and residents were expected to get out their shovels and keep sidewalks clear.

He said he had not seen one snow plow in action in Dublin.  “In a city like this we should be able to move about. There has to be a better solution than shutting down and going home for a few days,” he told The Irish Times.

He has a point.   Maybe we should do less of the lengthy NECC press conferences and more investment in equipment.  The NECC has been in existence now for 10 years but we seem to be no more prepared for extreme weather events than we ever were.

The excuse we hear is that other places (like the U.S. and Canada) are used to coping with extreme weather. For them it's normal, whereas for us it's highly unusual.  We get so few of these extreme events here we cannot justify spending a lot of money on plows, etc.   But that argument is less convincing these days as the global weather becomes more erratic.

Looking back now, the storm brought out the best in people here, with communities looking out for each other and local council workers working around the clock.  At the high point there were tens of thousands of people without power but emergency crews worked through appalling conditions to get them back on again quickly.   Ordinary people with four-wheel drive vehicles answered the call to get medical staff from home to hospitals.

As the storm subsided, farmers all over the country were out on their tractors clearing secondary roads.   We were all in it together.

Only in one area (West Tallaght, a big suburb on the west side of Dublin) did the storm bring out the worst in people, when a feral mob of looters attacked a Lidl store knowing that the weather would make it difficult for the police to get to them quickly.   But although video of this went viral, it was an isolated incident.

For now the good news is that the big thaw has set in -- and we are getting new warnings about flooding!   There is also an ongoing problem with water supply in some areas where frozen pipes burst.  As we say here, it never rains but it pours.