The hard living, hard drinking (and quietly aging) Irish construction workers of New York City, the final chapter in a centuries-long tradition is being written. 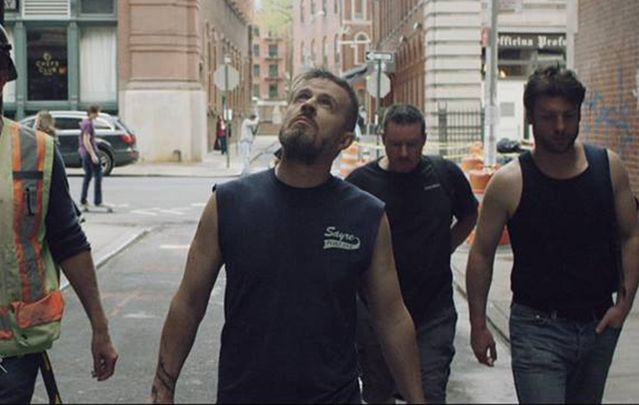 Concerning the hard living, hard drinking (and quietly aging) Irish construction workers of New York City, the film follows them as the final chapter in a centuries-long tradition is being written.

“Yesterday was a big one for me, premiering it in my home city,” Broderick tells the Irish Voice. “We screened it a few months ago, at the London Irish Festival, but New York was different because I’m showing the movie to the people I’m making the movie about basically.”

With the actors, crew and wider community all in the one venue there was pressure to feel the film was right, Broderick says. “My concern was that I had portrayed it effectively and respectfully and the answer was a resounding yes. I’m been receiving emails, phone calls and texts all day.”

Next week Emerald City will screen in Belfast and Derry.  In April, it will screen at the Manhattan Film Festival at Cinema Village, then Boston, Cleveland and then on to Chicago for the city’s Irish Film Festival (screenings are already sold out).

The message of the film, Broderick says, is that the Celtic Tiger and the repressive U.S. immigration laws have ended the 200-year reign of the Irish construction worker building New York. The Irish crowds that are here now are the last of the name.

“Now all the educated young people are going off to college and into IT jobs and away from the trades,” he explains. “The guys who came over in the eighties and nineties were the very last wave of a tradition. These guys are a dying breed.”

Their disappearance is changing the landscape of the Irish communities in the Bronx and Queens, in the bars and restaurants.  All of a sudden, this community is disappearing and it will never return to what it was, Broderick says.

His impulse was to record how they lived and loved as it comes to an end. The sense of exile and loneliness that he sees in the community is reflected in these guys on screen.

Nowadays you have to your papers; it’s not like the old days. You can’t look the other way and neither can employers.

“You can’t have a guy walking into an apartment to do some work now with insurance. If he breaks a vase or cuts his finger you’re responsible. It’s not like the old days,” he says.

Broderick adds that he has finished a new book and will begin shooting his second feature film in the autumn in Ireland.