My time as a smuggler on the Northern Ireland border

With European borders literally all the rage just now in every sense of the word, let’s still have a bit of midsummer craic to lighten the doom and gloom. 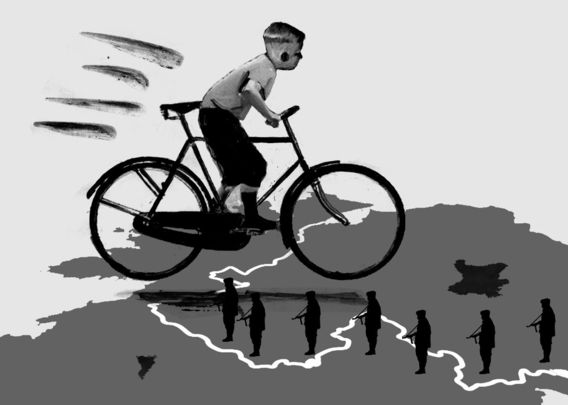 With European borders literally all the rage just now in every sense of the word, let’s still have a bit of midsummer craic to lighten the doom and gloom.

I will begin by admitting openly to all that I was a hardened young smuggler across the Irish border by the time I was 12 years old, wearing short corduroy trousers and actually riding a High Nellie bicycle several times from under the bar because I was too short to sit in the saddle.  I grin at that now at a time when Britain’s drive to leave the EU is in danger of being scuppered by an inability so far to organize a customs and excise solution to our border.

Time is running out to solve the crux about what they are calling a soft border, with no checkpoints or physical hindrances to the brisk trade between our Republic and the U.K.  The EU chiefs, representing us as a loyal member, say that John Bull has committed himself to steps which would avoid what they are calling a hard border, with no limits to trade or movement across it, and, without such steps by John Bull there will be no Brexit settlement by June as originally planned.

I grin again as I recall my smuggling days, especially those involving precariously riding those hugely heavy High Nellie bikes from under the bar and they stuffed to the gills with contraband goods.

You see, our home was only a short bicycle ride from the border.  This was in the fifties when there was still strict rationing of many goods in the six counties, and there were often items available across the border in what we always called the Free State which were not easily available at home. Cigarettes were one such item, and the truth is that the hollow tubular frames of my High Nellies were filled with hundreds of precious cigarettes expertly packed there by experienced adults in border towns near home like Swanlinbar and Blacklion, and equally expertly unpacked by our parochial adults when I arrived home safe and sound.

In my smuggling prime of boyhood I happily smuggled a wide variety of scarce items across that really hard border, with customs checkpoints of both states manning the line on a 24-hour basis.  I recall items such as little steel cobblers’ nails, for example, which could not be obtained at all in the six counties for whatever reason at a time when the leather soles of shoes needed replacement after the hard years of WWII and its austere aftermath.

They were welcome indeed when smuggled in. You were a great cub altogether the adults said.

I mentioned the short corduroy trousers we boys wore back then. Clothing was still rationed at home so the mothers reacted by nearly stripping you down to the bones, or covering your decency with worn out britches, barely decent they were so old, and then fitting you out with grand new corduroy trousers and jackets, usually brown or navy, for the triumphantly unimpeded cycle home.

The customs men and the police never really looked hard at small boys, you see, because they were after bigger operators altogether, like the lads who smuggled herds of cattle across the line under the cover of darkness or, quite literally, anything where there was a shilling to be made because of the so-called hard border they were guarding then.

Out of nowhere I recall a good yarn from the fabled border town of Belleek of the china at the other end of the county.  The authorities had been warned to keep a close eye on a cute local who regularly came to the border with a wheelbarrow loaded to the brim with items which might be contraband of one kind or another.

However, diligently though they checked, all the goods in the barrow were legal traffic and did not include illegal cigarettes or spirits like mountain dew or those little cobblers’ nails (called sparables incidentally) that I mentioned above as part of my loot.

It was years later and times were a bit easier all round when the cute lad involved got drunk in nearby Ballyshannon one night and revealed that he had been smuggling precious steel wheelbarrows!  If borders create political and social and economic problems they also create financial opportunities for cute lads like the Belleek fellow.

Wouldn’t it be a really ironic quirk of Irish history if our border, which John Bull imposed on us so long ago now, becomes the really hard political border which prevents the English people from exercising fully their electoral decision more than a year ago now to leave the European Union and forge some new trading arrangements both with Europe and the rest of the world, including the United States. All the balls are still in the air at time of writing, but the writing is far from being on either the wall or any settlement document.

The EU chief Donald Tusk is representing the Irish case for a so-called soft border without trade limitations, tariffs or movement inhibitions of any kind, at least as forcibly and strongly as any of our own political leaders would or could.  They can to a great extent sit back and relax a bit as he speaks out on their behalf on an almost daily basis.

And the clock of time ticks on inexorably.

It’s a fascinating midsummer scenario all round for sure.

Forgive me for remembering most my own smuggling days and the excitement of it all from under the bar of an illicit High Nellie in a different Ireland. Will some other young lad, still in the cradle, be given the opportunity to become a smuggler in his era down the intriguing years ahead of us all? Your guess is as good as mine.