A mixed-race couple have left Ireland with their baby after online abuse and a death threat over their appearance in a Lidl supermarket advert. 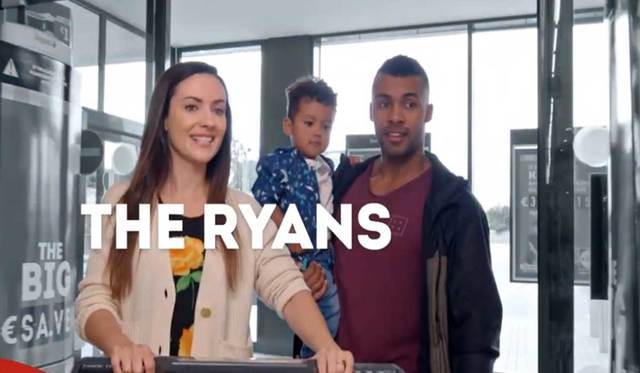 The Ryan Family featured in advert by Lidl. Lidl / YouTube

A mixed-race couple have left Ireland with their baby after online abuse and a death threat over their appearance in a Lidl supermarket advert.

Fiona Ryan, 33, from Co. Meath and her Brazil-born fiancé Jonathan Mathis, 32, who grew up in Britain, started receiving abuse online when the TV campaign for the German-founded supermarket chain was criticized on Twitter for showing a “multicultural version” of an Irish family.

While some social media users defended the family and reported the tweet by former investigative journalist Gemma O’Doherty, others added their own racist and offensive comments.

The couple responded last week by calling for tougher hate crime laws and more regulation of social media in Ireland.

Then, on Friday Ryan told the RTE Late Late Show that a death threat had been made against her, her partner and their 22-month-old son Jonah.

She said, “They are talking about harming and death to my partner and my child so I am not going to stay in a country where this is allowed. I felt like we needed to leave.”

Earlier in the controversy the couple told The Irish Times they bore no malice towards O’Doherty. “We actually thank her for highlighting there is no real hate-crime legislation. We feel it’s our duty now to do something about this.”

The couple, who met in London seven years ago, said they had decided to move out of the Ryan family home in Meath and return to England.

Ryan said she was shocked by the abusive comments sparked by the initial tweet from O’Doherty.

“When I read through them all I kind of feared for my safety, for my son’s safety straightaway,” she said.  “It was pretty harrowing to have to read through all that and I don’t think anybody should be subjected to that kind of online abuse.”

The family’s ordeal started on September 7, when O’Doherty tweeted the advert, with the comment, “German dump @lidl_ireland gaslighting the Irish people with their multicultural version of ‘The Ryans’. Kidding no-one! Resist the Great Replacement wherever you can by giving this kip a wide berth. #ShopIrish #BuyIrish.”

The couple expressed their frustration at initial reluctance by gardai to take a statement. They were told it was a civil matter.

However, after advice from the European Network Against Racism Ireland they filed a report and have had a meeting with an investigating officer.

The Irish Times reports that after flying to Ireland for the RTE interview, the couple spent the weekend with Ryan’s family in Co. Meath. They have planned to return to Britain.

They have called on “as many people as possible” to sign an online petition demanding hate crime legislation.

Meanwhile, they told the paper they will not speak publicly again as they “need to lay low.”

Minister for Justice Charlie Flanagan said his department is reviewing provisions of the 30-year-old Incitement to Hatred Act and a public consultation will begin “later this autumn.”

The Irish Times said it made several failed attempts to contact O’Doherty. She was banned from YouTube in July for promoting hate speech.

She stood as an independent candidate in the recent European elections where she secured 1.8 percent of first preference votes. She also unsuccessfully sought a nomination to stand in last year’s presidential election.