Laughing at the Oscar mess up, ourselves and the memes

"What a time to be alive!”...a movie like Moonlight winning Best Picture truly marks a pivotal point in the arts, in humanity, and in our collective resistance, resilience and resolve to move forward." 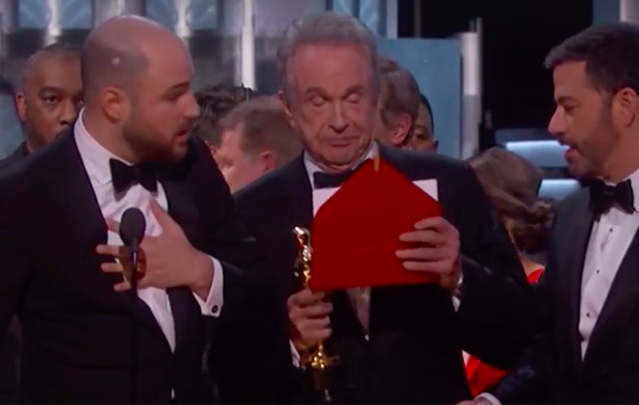 "What a time to be alive!”...a movie like Moonlight winning Best Picture truly marks a pivotal point in the arts, in humanity, and in our collective resistance, resilience and resolve to move forward."

In a world where social media reacts to a mistaken Oscar announcement by pleading it to mirror the presidential election, what is there that cannot be made into a joke?

On Sunday night, the Oscars stage was filled with predominantly white creators and producers accepting the prestigious award for Best Picture while calling for Hollywood diversity. Moments later, the stage was filled with predominantly black creators and producers accepting the same award following one of the most historical live TV errors of all time -- and the Internet exploded.

Having sat through the hours of tedium that is the annual Academy Awards -- I was quite literally napping during each of the 7,000 advertisement breaks -- finally, something interesting happened. The hours between Viola Davis’ acceptance speech and the La La Land-Moonlight debacle were so completely unbearably dull, many humans gave up in favor of sleep and whatever their dreams would kindly conjure up instead. As a previous Oscar obsessee, I prevailed.

Last year, in my mildly unhealthy fandom of Leonardo DiCaprio (and everything that Titanic stands for), I couldn’t find a single solitary friend who would commit to watching the hours and hours of awards in order to finally watch him win, so I went to a bar where I used to work, befriended several similarly weirdly devout humans and cried actual tears when he won.  I have almost no shame in admitting that.

This year the tears were beginning to stream from boredom -- for one thing, the only Oscars movie I saw this year was Zootopia which won, thank GOD. For some reason, post break-up, I decided to completely avoid the cinema at all costs. It was a thing that we did, my ex and I, going to the movies. And it suddenly felt very strange to go with anyone else, or alone, or at all.

But the funniest thing was, when it all kicked off, my friends and I looked at each other and instantly started talking about how much we were looking forward to the memes.  Oh, what a time to be alive! Oh, what memes there will be!

This time of meme culture is possibly the worst and best thing that has happened to me in my entire life. On one hand, it caters entirely to my generation who are conflicted with an inherent paradox of over-achieving and total apathy. We want everything without doing anything. We want to be something while doing nothing.

We want to be millionaires with stellar careers, hot bodies, perfect jobs, lives, wives and everything in between. We also want to be horizontal all day, eating burgers, surrounded by puppies and watching cartoons.

Memes cater to that in a way that long-form journalism can’t.  It’s a particular brand of silliness that we crave, that both congratulates, condemns and yet inescapably perpetuates our rather unhealthy means of existence.

And yet, meme culture doesn’t lack in cleverness -- in fact, a lot of what is generated from pop culture and politics is extremely clever. The Twitter pleas for the Oscars faux pas to retroactively happen to the presidential election were hilarious, the comparisons between Nicole Kidman’s mangled hand clapping and Pan’s Labyrinth were astutely accurate, and the ongoing comparison between John Legend and the animated cartoon character Arthur never fails to tickle me.

Meme culture makes us feel both smart and silly, informed and interested, cultured and careless at the same time. It keeps us in the loop, but not so involved as to seem invested.

And who can blame us? The president of this country was the laughingstock of an awards show for people who make movies. His main mode of communication with the democracy who (again, how?) elected him is through 140 characters on a social media site that is mostly populated with a type of human commonly known as a “troll” for their tendency to spout misinformation, and to insult other human participants of the network. All of this in itself generates more godforsaken memes. It’s a vicious but undeniably entertaining circle.

Comedy and brevity seem to be going hand in hand these days, and it’s place in our daily dose of world news is becoming increasingly common - even expected. We want reliable sources for information that is not “fake” news, we want the president’s 140 characters of egomaniac nonsense, and then we want the comedians to step in, and turn it into a short SNL sketch, a New Yorker cartoon, a meme, or an even funnier 140 characters.

As my mother would always say in times of trouble, after throwing a particularly wild joke into the mix -- if you can’t laugh, you’ll cry. If we can’t laugh at how much of a crazy circus the world has become, we might never stop crying.

And yes, the crying is important because of the affirmative, productive and influential action that generates, but for those of us who are basically ineffective in the grand scheme of things, there is -- at the very least -- laughter. There is the ability to be creative, and to turn the mindless ramblings of crazy -- albeit, powerful -- maniacs into comedy gold. There is the freedom to enjoy that comedy, and to share in unexpected moments of joy.

While scrolling through the first round of Oscar mishap memes last night, my friend looked up at me from her iPhone and giggled, “What a time to be alive!” Part of me thought yes, a movie like Moonlight winning Best Picture truly marks a pivotal point in the arts, in humanity, and in our collective resistance, resilience and resolve to move forward.

Another part of me thought, yes, the fact that that we can strike a balance between taking things seriously and generating laughter from disaster is what makes us human.