"It was great, meeting Colin, an absolute gentleman. He wanted to walk me into the ring but I said, 'No, it's okay." 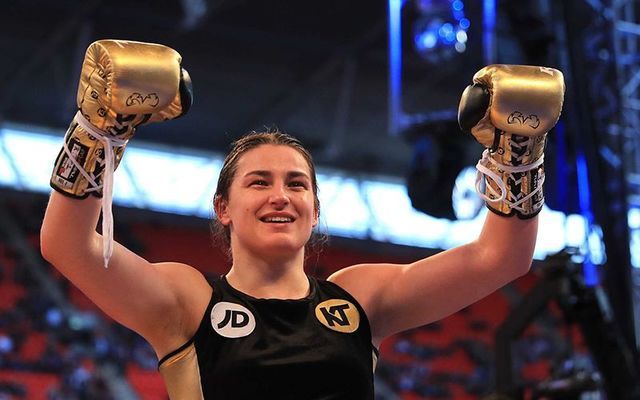 Katie Taylor is a world champion boxer with the belt to prove it after she won the WBC world lightweight title in Cardiff on Saturday night, and Colin Farrell was there to cheer her on.

Colin was in the crowd of 80,000 with a girlfriend who he was cuddling up to as cameras clicked away.  No word on who she is or how long they’ve been with each other but they looked happy, and good for him.  He seems to be in a great place these days with a string of positive reviews, and a glowing piece in Sunday’s New York Times about his career resurgence.

Colin spent time with Katie before her fight, and even volunteered to walk her into the ring.  She declined, but clearly enjoyed her time with the Irish star.

Love this pic of a proud Colin Farrell meeting Katie Taylor before her world-title bout. Via @FairGameCast pic.twitter.com/Z8zzJSbypF

"It was great, meeting Colin, an absolute gentleman.  He wanted to walk me into the ring but I said, 'No, it's okay,’” Katie told the Irish Independent.

Colin was mightily impressed with Katie’s boxing skills. "She was already a national hero -- she probably would be in any country in the world," he told Sky Sports.

“Obviously for ourselves, an island country with a population of just over five million, but this goes into England because this is a sporting achievement that goes beyond the boundaries of our country and goes into the international world.

"What she's achieved is like what [Conor] McGregor has achieved, or [Barry] McGuigan or Steve Collins have achieved. Like them, she is more than a national hero. It's just incredible."

Great to wake up as World Champion today! Thanks to all for the support. We're only getting started...💥 pic.twitter.com/hyK1My4fJK