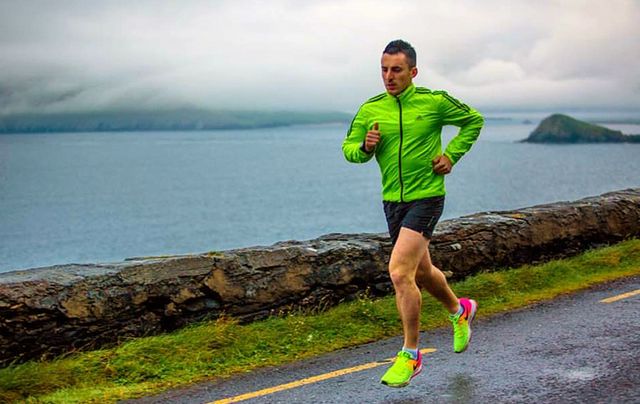 A determined Irishman has vowed to push his bruised body to the absolute limit as he edges ever closer to completing his 24th consecutive marathon in as many days.

Shane Finn has now successfully reached the halfway point of a punishing 628.8 mile charity trek around Ireland. The ambitious Co. Kerry-based fitness instructor has set himself the target of running 24 marathons in 24 days to raise tens of thousands of euros for sufferers of Spina Bifida and Hydrocephalus.

And the super-fit 25-year-old, who on Tuesday set off on his 13th marathon in as many days, insisted he now feels more confident than ever about completing the mammoth feat when he returns home to Dingle, Co. Kerry on July 15.

"It's been hard and it's physically very demanding, but I'm at the halfway stage now and that's given me a big psychological lift,” he said.

“You have to grasp at anything to keep you going, and targets like making it to double figures or reaching the month of July become really significant.

"I'm taking every day as it comes and I'm trying not to think too far ahead.  The mornings are the worst, because when I get up I tend to feel sick and dehydrated, almost as if I have a hangover, and I don't have much of an appetite.  But as soon as I put my running shoes on I'm okay.  It transforms me.

"I really don't need any motivation to do this.  As I've said before what I'm doing is nothing in comparison to the daily challenges faced by people with Spina Bifida and Hydrocephalus.  All I have to do is think of them to take me across the finishing line every day."

To date Finn and his support team have raised over $55,000 for Spina Bifida Hydrocephalus Ireland.  But the ultra-athlete urged the Irish public to dig deep into their pockets to help him reach his fundraising target of $100,000 by the end of the challenge.

"My body is holding up pretty well and I'm confident that I'll complete the second half of the challenge.  Perhaps the hardest marathon remaining will be on day 22, from Bantry to Kenmare, Co. Kerry, because a lot of that is uphill,” he said.

"But there's no way in the world I won't complete this.  You'd have to shoot me dead to stop me at this stage."

To find out more or donate visit www.24marathons24days.ie.