New thriller takes us to 13th century Ireland, as a quest to return a powerful religious relic to Rome puts the lives of everyone who touches it in danger. 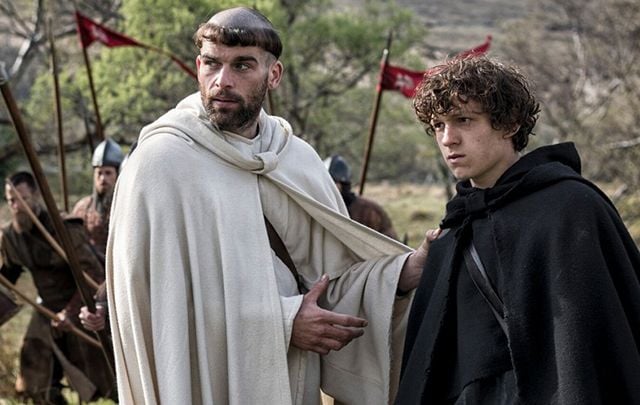 In Pilgrimage, director Brendan Muldowney takes us to 13th century Ireland, where a quest to return a powerful religious relic to Rome puts the lives of everyone who touches it in danger. Cahir O'Doherty checks out this tense medieval thriller and gives his verdict.

Spiderman can speak Irish. That was the first surprise in director Brendan Muldowney’s brilliant new thriller Pilgrimage. Casting current Spider-Man Tom Holland as a young Irish monk on a mission, Muldowney surrounds him with some of the best acting talent currently working.

Pilgrimage is set in a place you don’t see very often in Irish films: the 13th century. For so many film directors Ireland’s history seems to begin with the Rising or the Civil War, so it’s quietly spellbinding in itself to see our distant past come to life on the big screen.

And man, does it come to life. It’s 1209 and Brother Geraldus (Stanley Weber) has come to Ireland to retrieve the Relic, a mysterious rock that many believe has the supernatural power to aid anyone who possesses it – think Indiana Jones meets Game of Thrones.

The Pope wants the Relic back in his possession in Rome, the better to aid him in his many battles. To get it to him the monks have to cross the dangerous warring plains of Ireland, avoiding both the local warlords and the invading Norman forces, to safely transport their prize to a waiting ship.

What’s fantastic is the medieval Irish setting. This is a time and place we don’t see much of in film, and no sooner do we arrive but we hear young Holland and his fellow monks speaking fluent Irish in a country where the Normans are trying to violently establish their domination.

“The writer came to me with the idea of Irish monks in the 13th century dragging a relic across the country, and for exactly the reason you just said – it’s not a period we see that often – it just struck me as highly original,” Muldowney tells the Irish Voice.

“It feels like a western, or a war film, or perhaps a samurai movie.  Any epic where the protagonists travel through hostile landscapes, those were our touchstones.”

Pilgrimage certainly has the classic structure of the hero’s journey.  It starts with Holland’s call to adventure and it follows his steps in a very classic way. There’s an experienced mentor, there’s a determined aggressor, and we watch young Diarmuid (Holland) stepping out into the big bad world for the first time.

All the great elements are there. It’s also an edge of your seat roller coaster ride.

In the film Diarmuid has a close relationship with a mysterious mute man (Jon Bernthal) who has washed up on shore. That’s a terrific starting off point for a director, Muldowney admits. “That back story helps us to see the world through an innocent’s eyes. Diarmuid is a blank slate, he has pure faith that can either be deepened or taken away.”

In the film the native Irish are a complex and at times warlike race, an interesting mix of pagan and Christian.

“The Vatican didn’t have much control over Ireland at the time,” explains Muldowney, “which is why the monks’ tonsures are different to the Roman ones. At there time there was still a lot of cross over to the old pagan traditions, including among the Irish monks, and they were seen by Rome as this renegade nation on the edge of Europe.”

When the Cistercian Brother Geraldus arrives in Ireland he’s horrified by these wild monks living in isolation on the west coast, and he wants to civilize them.

He talks of draining the bogs of the wild Irish the way Donald Trump talks about draining the swamps. “We wrote the script years ago and the relevance of that just hit me recently,” Muldowney laughs.

What’s fascinating is how the prospect of controlling the power, the Relic reveals the true nature of everyone who comes near to it.

“A lump of rock causes so much carnage,” says Muldowney. “When Diarmuid hears the Cistercian Geraldus rant about the growing power of the church and the fear that he’s going to instill in people he decides screw that, that rock’s going back in the sea.”

Muldowney says he loves the image of a rock that in every other context could be meaningless but is somehow given so much power. People are willing to fight and die for it. “I find it funny actually,” he says.

So Pilgrimage is that rare thing, an action film with a bit of depth.  It’s about politics, faith and violence and it’s powerfully relevant to today’s world.

A lot of the cast have gone on to become bigger stars since Muldowney cast and made the film in 2015. At the time they were just auditioning journeymen actors. Now Holland is starring in Spider-Man: Homecoming, one of the biggest blockbusters of the summer.

“I was editing Pilgrimage when I heard that Tom was cast as Spider-Man. That wouldn’t have made much difference to me. I cast them because I thought they were great actors. Just because Tom and Jon have become Marvel universe characters and the rest of the Irish actors have all gone on doesn't surprise me.”

The beauty of the Irish landscape and the craic that was had in the hotels where they were holed up brought the cast together, Muldowney explains.

“I think actors love going on location in Ireland. It’s a great start for everyone. You put them in a hotel in the middle of nowhere and they all bond and got on board with the whole thing. It was just one of those experiences where it was nice to shoot with everybody because they all got on.”

Brexit and movie making in Ireland

Topically, since the film uses Irish and British actors, do the unanswered questions about Brexit look like they will make north-south cooperation harder? Does Brexit impact the films he’s trying to make?

“I’m not producer, but I suppose everyone’s worried about some part of it. There will be some fallout. It’s such a fragile business that the Brexit thing to me is just one more problem. Financing them, casting them, getting them made is such a battle.”

Meanwhile, now that he’s directed a feature set in Ireland’s early history, will Muldowney be tempted to return? “I’m definitely drawn to the legends or histories of Vikings and King Arthur,” Muldowney says.

“I like creating the world, the imagery. I like the way you can talk about themes from modern life and sort of hide them in the past. So the short answer is yes.”

One of the hardest things Muldowney does is scout for the right Irish locations. You are not going to be able to make brilliant shots unless you put the crew in a brilliant landscape, he says.

“We shot in Mayo and Galway and didn’t bother going to Kerry or Donegal because we had such a core location. Ireland is just spectacular,” he said.

In Ireland every film shoot is at the mercy of the unpredictable weather. On the first day of shooting they had gale force winds and rain and then for two weeks they had a heat wave, he says.

“The scene where there is a storm on the mountain was actually filmed on one of the sunniest days of the year. Watching the film you wouldn’t realize how hard we worked trying to degrade it. We had to put big digital clouds into the sky because there weren’t any! You would think Ireland would at least give you the bad weather, but no. We had to work so hard to make it look like that.”