Sinn Fein leader Mary Lou McDonald told the party ard fheis her party is here to stay and told Fine Gael and Fianna Fail to "wake up and smell the coffee". 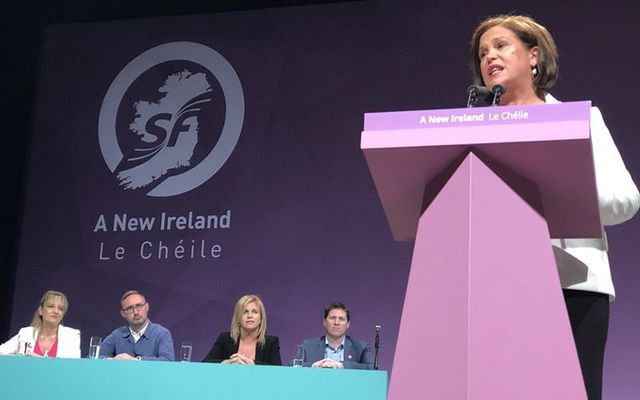 Sinn Fein leader Mary Lou McDonald told the party ard fheis her party is here to stay and told Fine Gael and Fianna Fail to "wake up and smell the coffee".

Sinn Fein leader Mary Lou McDonald’s call for rival party leaders to “wake up and smell the coffee” and accept that her party wants to be part of a “progressive” administration in Dublin after the next general election has received a big freeze from Fine Gael and Fianna Fail.

Taoiseach Leo Varadkar, who is Fine Gael leader, and Micheal Martin, leader of Fianna Fail, are opposed to doing business with McDonald.  They say they do not want Sinn Fein in government with them because they believe the party is soft on crime.

As speculation mounts of a general election within a year, McDonald made her call at the weekend Sinn Fein ard fheis in Belfast when she said those who want to keep the party out of office should realize it is here to stay.

With a clear reference to its place in the suspended Stormont administration in the North, McDonald said Sinn Fein was already in government and was now ready to be part of a “progressive” administration in Dublin.

But Varadkar told the Irish Independent, “Sinn Fein is not a normal party. It is soft on crime.  We can see that by the fact that they are opposing the renewal of the Special Criminal Court.”

The court was initially established to deal with terrorist-linked offenses, and more recently it was empowered to deal with certain organized crime offenses.

He added, “There was a sense of entitlement that somehow Fianna Fail or Fine Gael owed Sinn Fein power.”

Martin hit out at Sinn Fein for failing to unequivocally condemn the 2007 murder of 21-year-old Paul Quinn, who was beaten to death by an IRA gang in a Co. Monaghan barn in 2007. Martin also criticized Sinn Fein’s failure to condemn the murder of 33-year-old father of two Robert McCartney, who was killed by an IRA gang in Belfast in 2005 when he attempted to defend a friend who was accused of making an insulting gesture to a woman.

McDonald told RTE that the suggestion her party was not fit for office was “a load of bunkum.”  She said Sinn Fein was not going to sit on the sidelines.

In her keynote leader’s speech to the ard fheis, McDonald said the Sinn Fein policy on abortion is settled.

Delegates earlier voted to effectively allow TDs and senators to support legislation to allow for unrestricted abortion up to 12 weeks of pregnancy when it comes before them in the Dail after the recent referendum in which the public voted by two to one in favor of the measure.

Read more: U2 invite every ambassador in the world to their New York concert in bid to help Ireland

Here's her speech in full: