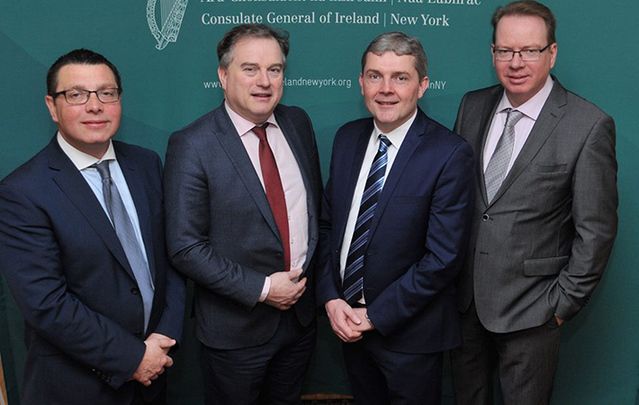 Members of the Real Estate Alliance, including Michael O’Connor (left), at the Irish Consulate last week.

Bargain hunters, potential investors and the plain old curious came out in force last Thursday for the first ever Irish property exhibit in New York hosted by the Irish Real Estate Alliance (REA), Ireland’s top group of property professionals with 55 offices throughout the Republic.

The event, held at the Fitzpatrick Grand Central hotel, attracted a steady stream of attendees throughout the evening who were able to speak with 20 REA professionals from various offices about the current state of the Irish real estate market, which soared to unsustainable heights during the Celtic Tiger only to crash and burn in 2008.

Now, however, the market is on an upswing, but there are still buys to be had. Large screens advertised available properties throughout Ireland at all price points.

“We didn’t know what to expect, but we certainly didn’t except the huge crowd we got today,” REA Chairman Michael O’Connor told the Irish Voice.

Attendees included a broad cross-section of potential purchasers: investors, retirees, those looking for a holiday home, and native Irish with young families here wishing to raise their children back in Ireland.

“I spoke to one person with three kids who was saying it’s going to cost tens of thousands of dollars to educate her kids here, and that the price of education here doesn’t work for her family. In Ireland education is free,” said O’Connor.

The exchange rate between the dollar and euro is the best it’s been in many years, which further increases the attractiveness of investing in Irish real estate. (€1 equals roughly $1.10).

Ireland’s emergence from the economic doldrums has also injected a sense of optimism into the property market, and American-based buyers are taking notice, O’Connor says.

REA conducts surveys each month, and found that 19 percent of its inquiries are originating from outside of Ireland, with 16 percent of that figure coming from the U.S.

“We feel like it’s a good time to be here,” says O’Connor. “It’s a new market and we wanted to come and introduce ourselves before anyone else.”

Dublin and its suburbs always rate high in buyer interest, O’Connor maintains, “but there are so many variations on where people want to buy and what they are looking for.

“Those looking for a holiday home typically look to the coastal areas. And then there are people who want to be near the other big cities like Cork and Limerick.”

Mortgage requirements have significantly tightened in Ireland since the real estate boom and bust which was fueled by reckless lending from banking institutions. Irish emigrants returning home to live would be eligible for a mortgage from an Irish bank, but American-based buyers are not.

“The Americans are mainly cash buyers we find,” O’Connor says, “which makes sense because they want to take advantage of the great exchange rate.”

Helen Wandzilak accompanied her Co. Kerry native mother Mary Thornton to the property exhibit. Both are open to the idea of buying a home in Ireland, but the question is where.

“I would like Dublin,” said Wandzilak, who lives in Yonkers and spent childhood vacations in Ireland.

Thornton, who immigrated to New York in 1970, wouldn’t mind retiring in Ireland, at least for part of the year.

“Florida I wouldn’t like,” she said. “Kerry would be nice.”

U.S. real estate brokers were also at the exhibit to learn more about the Irish market. Charles Brophy and Mary Phelan Kavanagh from the giant Douglas Elliman brokerage, based in the Riverdale section of the Bronx, liked what they saw.

“It definitely seems to be a great time to buy in Ireland,” said Brophy, originally from Tullamore, Co. Offaly.

Phelan Kavanagh agreed. “There are some good buys we’ve seen, for sure, depending on location which is the big word in real estate.”

The brokers said they would like to expand their work here to include facilitating sales in Ireland. “There could be opportunities for us to refer potential buyers and help them through the process from here,” said Brophy.

O’Connor says the Irish property market is reclaiming its footing, and prices are only going to increase – though never to the unrealistic levels during the so-called boom.

“Dublin picked up first, so I would forecast a five percent increase in prices this year for there, whereas places like Limerick, Cork and Galway will probably see a 10 percent hike,” he added.

“Now is the time to get in for sure.”