Will this per-election budget be enough to convince the people? That remains to be seen. 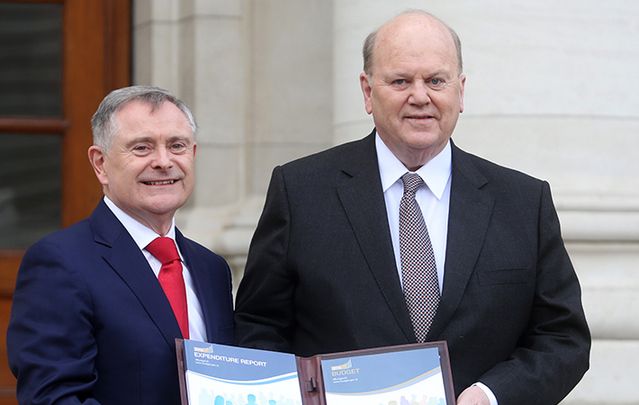 The Irish budget for 2016 announced in the Dail on Tuesday afternoon contained few surprises. That's because most of the good news, the cuts in taxes and the extra spending which together add up to a €1.5 billion injection into the economy, had been well flagged in the past few weeks.

But the big question remains unanswered: Will it be enough to get the government back into power in the upcoming general election?

The headline measure in the budget is the reduction of 1.5 percent in the hated Universal Social Charge (USC). Introduced by the last government in 2010 at the height of the crash, the USC was an income "charge" to make possible ongoing social spending by the state, mainly on health, at a time when the state's finances were collapsing.

That made it sound almost virtuous. In reality it was simply an extra income tax which brought the marginal rate up to 52 percent. Its real purpose was to get the yawning budget deficit under control and stop the country going bust which, as we all know, it failed to do.

For the past five years, thanks to the USC, and another long standing income charge called Pay Related Social Insurance (PRSI), Ireland has had one of the highest marginal rates of income tax in Europe. But the rate is only half the story.

So in Ireland the top tax rate is not only paid by high earners; it's paid by nearly everyone in the workforce. Our top tax rate is nominally 40 percent, but on top of that you add the USC of seven percent and PRSI of another 5 percent or more.

It's a joke, a very bad joke. And that, combined with the extremely low point at which the marginal rate kicks in, is why no one has been laughing over the past few years. Which is why the government had to change it to have any hope in the upcoming election.

The marginal rate of 52 percent on even modest incomes has been a real disincentive and a serious burden on ordinary working people struggling to make ends meet. Why work longer hours to pay the bills when the state is taking so much of anything extra you earn?

Clearly, something had to be done about this penal income tax situation. The 1.5 percent cut in USC announced in the budget, coupled with a modest increase in the threshold at which people have to start paying, is the government's recognition of that, and also the fulfillment of its promise to get marginal income tax rate below 50 percent as soon as possible.

The changes announced in the budget mean that the marginal rate of tax will now be 49.5 percent, and it will not kick in until you earn more than €70,000 a year.

With the economy now recovering quickly -- growth here is forecast to be over six percent this year and over four percent next year -- this change is now possible. Tax revenues have been well ahead of forecasts for this year.

That has meant the government has been able to spend more this year and also cut taxes and increase spending in this week's budget for next year. Even with the extra spending this year we will still get the deficit down to 2.1 percent of GDP, well below the three percent target that had been set for us by the Troika under the terms of the bailout.

The government's deficit target for next year, which we should have no trouble meeting, is around 1.4 percent. So we're getting there.

With the mountain of debt we have to pay back, the sooner we can get into budget surpluses the better. We should remember that until we actually get back into budget surplus, tax cuts and extra spending like those announced in this week's budget are financed by borrowing.

It's important to remember this when the government talks about tax revenues being up and having more money to spend as a result. Yes we do, but only because we are still borrowing.

The reduction in USC which slightly lowers the heavy income tax load carried by almost all workers here is the big news in this week's budget. It should be noted that all the income tax rates and bands were left unchanged so the improvement is minimal.

For a single worker on the average wage it will add up to a few hundred euro a year. For a higher earner, it will be double that. It's welcome, but it still leaves the so-called "squeezed middle" of the majority of workers in Ireland facing extremely high levels of tax on modest earnings.

The USC change gobbled up nearly all the capacity for lowering the burden on workers here, but the budget did contain a few other sweeteners designed to win votes in the upcoming election.

Among the other measures announced in the budget were:

*A small increase of €3 in the state old age pension, bringing it up to €233 a week for a single person. This is one of the highest in the world and an increase was not necessary. But older folk vote.

*The Christmas bonus for people on welfare which was chopped because of the crash will be restored to 75 percent of the recipient’s weekly payment. That means pensioners will receive a bonus of €173 and people out of work on unemployment benefit of €188 a week will get a bonus of €141.

*Child benefit is to increase by €5 per month to €140 for each child. Again, this is not means tested and is among the most generous family support payments in Europe.

So parents who want to leave the family home to their child will now not have to leave them also facing such a big tax problem. But since a lot of ordinary homes in Dublin cost €400,000 or more and the CAT tax rate is 33 percent, this is only a token gesture.

These are just some of the budget measures which are clearly aimed at sweetening the electorate in preparation for an election. The message is one of recovery and stability and promises of more relief

to come in the next few years. The government is saying that this is a start, it's clear evidence they are on the right track, so stick with them and things will get even better in the future.

Whether it's enough to convince people remains to be seen. It has certainly increased the likelihood of an election next month rather than next spring.

One way or another, the government is unlikely to get back with enough seats to govern alone. But it now has a real chance of retaining power, even if it will need the support of some independents to do so.

If so Enda Kenny will be the first Fine Gael leader to serve two terms in succession as taoiseach.