"Unless "drastic action" is taken house prices in Ireland will continue to rise for the next five to 10 years." 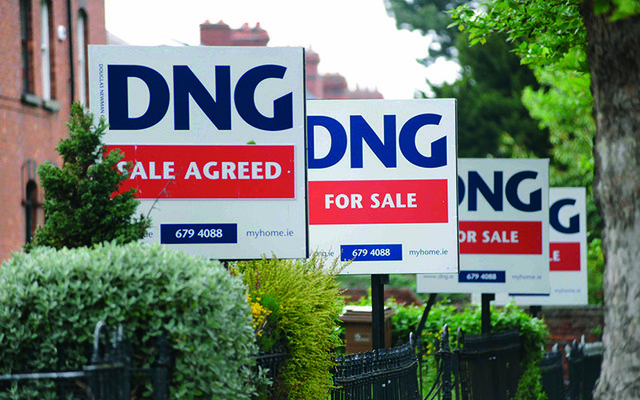 "Unless "drastic action" is taken house prices in Ireland will continue to rise for the next five to 10 years." RollingNews

At the end of last week the biggest property website in Ireland issued a report that made headlines here.  And this headline, like most headlines, was bad news.

The website, called Daft.ie (an inspired name if ever there was one), is the Google of the Irish property market.  In just a few years it has become the go-to place for buyers, sellers and renters here.  So it knows the market and, unlike the government or the construction industry, it gives objective information based on crunching the numbers at quarterly intervals.

Its latest report, written by one of its regular number crunchers, the Trinity College economist Ronan Lyons, says that unless "drastic action" is taken house prices in Ireland will continue to rise for the next five to 10 years.  With many people here already priced out of the market, that offers little hope of them ever owning their own home.

What is even scarier is the rate of price rises we are now seeing.  The Daft report shows that average house prices in Ireland are now 12 percent higher than they were at this time last year.  In the first six months of this year, prices climbed by almost nine percent.  The forecast for all of 2017 is that prices will be up 14 percent on 2016.

That is an alarming -- and accelerating -- level of house price inflation.  What it means in money terms is that the average house price in Ireland is now going up €2,000 every month.  And that is making would be buyers, particularly young couples, desperate to get on the property ladder as fast as possible, even if it means paying a price they can barely afford.

With that rate of increase, it feels like the property boom is back and, as the then Taoiseach Bertie Ahern said at the time, it's getting boomier.

The Daft report says that average house prices country-wide are still some way off where they were at the peak of the boom 10 years ago.  But since prices then made no sense whatsoever, that's not much reassurance.

The experts say that there won't be a property bubble this time because there is much tighter lending by banks now and more stringent rules about how much buyers can borrow.  So it's unlikely that the market will be over-stretched and then suddenly collapse.  They say that what's happening right now is a temporary mini-bubble caused by too many buyers chasing a very low number of houses for sale.

That is true -- but how long is temporary? Whether we can stop this mini-bubble inflating over the next few years remains to be seen.

To meet demand we need to be building between 40,000 and 50,000 new homes each year for the foreseeable future instead of the 10,000 (or less depending on which figures you believe) we built in the last year.

In the meantime, the depressing thing is that no one seems to know how to crank up construction quickly to solve the problem.  Apart from Brexit, it's the biggest headache facing the new government here.

Following new Taoiseach Leo Varadkar’s cabinet reshuffle we have a new housing minister, Eoghan Murphy, who is young and smart but already looking perplexed at the scale of the task facing him.  One of his first moves is likely to be scrapping the Help to Buy Scheme that was the brainchild of his predecessor, the similarly young and smart Simon Coveney.

That is no surprise.  The scheme, an income tax refund giving first time buyers back up to €20,000, was aimed at helping them to put together the higher deposits needed in this rising market.  It was well intentioned and is helping many young couples to buy a home.

But it has also been blamed for the rapid increase in house prices over the past six months.  Many people believe that builders are simply putting prices up even faster, since more young buyers are now able to produce the deposit and get a mortgage.

Crucially, it does nothing to increase supply and instead ramps up the pressure on prices.  And for that reason Murphy looks certain to axe it.

The change announced by the Central Bank last November cutting the deposit required by first-time buyers from 20 percent to 10 percent has also helped young buyers who had been unable to get a foot on the ladder.  But it too is driving price increases.

The basic problem remains the lack of supply and although building is gathering pace, mainly in the Dublin area, the level of activity is still way below what is required to produce the number of new homes needed.

To get things really moving the builders are claiming that they -- and buyers -- need more government help in the form of less tax, less regulation and more grants.  But Murphy has not accepted this line and has announced an inquiry into construction costs here, which are out of line with the U.K. and other countries.  If costs were lower, prices could be more affordable.

We all know how we got into this mess.   When the property market crashed 10 years ago, builders went out of business, banks went bust and the country almost went bankrupt.  Home building stopped, not just private housing but social housing as well, since the state had no money.

Even though construction is now reviving, mainly in the greater Dublin area, it is still at a low level.  Builders are cautious and banks will not take risks.  Plus there is a shortage of skilled construction workers since so many of them emigrated.

There are other factors at work as well that are not helping.  Nama, the state bad bank set up to deal with all the junk property loans, did nothing to help the local builders and developers who went bust at the time but who were always going to be needed when building started again.

Instead, Nama sold huge baskets of loans for unfinished housing estates, apartment blocks and building sites to foreign vulture funds at knockdown prices without any requirement that building must happen within a given time line.

That failure has allowed the funds to sit on many of these sites and wait for prices to climb.  One estimate is that these funds have sites with planning permission for around 50,000 homes, but so far only 3,000 have been built.

And it's not just the vulture funds.  Local builders have little incentive to rush back into full operation.  From their point of view, slower is better since it guarantees higher prices.

The new minister, like his predecessor, is going to be under severe pressure over the lack of social housing and the homelessness problem which is one consequence of that.  Building social housing is being ramped up, but the waiting lists are so long that it will be years before we get back to where we were before the crash.  And even then there was a shortage of state housing.

Apart from the lack of social housing, a major factor in the homelessness problem is the rapid increase in rents in the private sector, driven by the lack of supply of rental properties.  Although Coveney tried to tackle this with a form of rent control in some areas, rents are already beyond the reach of low income individuals and families.

These days in Dublin it's hard to find a two-bedroom apartment in the center or a three-bedroom house in the outer suburbs for less than €2,000 a month.   Many people fall behind and end up losing their home.

Over the past couple of years this has led to a growing number of people, including many single parent families, ending up in emergency accommodation in a hotel room with limited space and no cooking facilities.

Coveney had set a deadline of July 1 to end the use of hotel and B&B rooms as emergency accommodation and instead move families into "hubs,” larger properties with facilities for up to 15 families.  But that deadline has come and gone and although some progress has been made it is painfully slow.  The latest figures show that close to 650 families with children are still living in hotel rooms in Dublin, and the numbers so far are increasing rather than going down as more people lose the rented homes they had.

The new minister has now admitted that the deadline could not be met and that it will take some time for the new "hub" policy to work.  He is reviewing all aspects of housing policy, but he appears to believe that the hub approach will work over the coming months.

One of the difficulties in the rental sector is that there is so much red tape and regulation as well as heavy taxation that landlords who own "substandard" properties are now finding it more attractive to sell to home buyers than to update and continue renting.  And that means more low income families becoming homeless.

Overall, the housing situation in Ireland, particularly in the greater Dublin area, is a mess, a complex problem with no easy solution.  As the Daft report has said, it will take years to resolve.