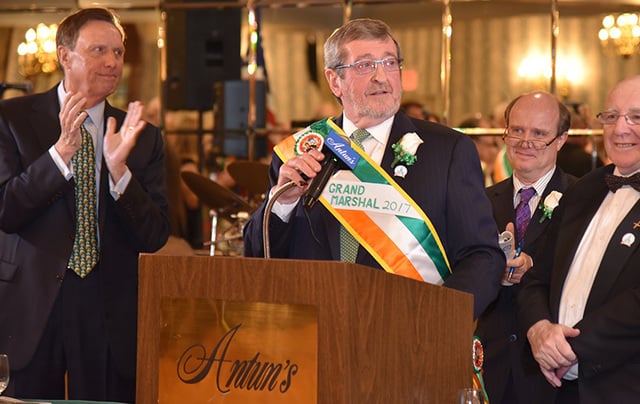 An audience of over 400 gathered at Antun’s in Queens Village on Sunday afternoon to fete this year’s New York City St. Patrick’s Day parade aides and grand marshal Michael Dowling, who stressed during his remarks that the United States is and always will be a nation of immigrants.

“The United States is one wonderful place,” Dowling, the president and CEO of Northwell Health, the largest private employer in New York State, told those gathered.

“I think it is very important … to keep in mind as we celebrate our own heritage and our own culture and the Irish that’s inherent in every single one of us, how great the United States is. It’s not a dark, forlorn place. It’s an incubator of opportunity.”

Dowling, a native of Knockaderry, Co. Limerick, will lead marchers in this year’s 256th annual parade on March 17.  The gathering at Antun’s also paid tribute to the 15 aides, one of whom, Helen Kilgallen Murphy of Rockland County, just lost her father.  She attended the event in his memory, and afterwards headed to his wake.

Consul General Barbara Jones informed guests that this will be her last time marking St. Patrick’s Day in New York.  She confirmed that she’ll be leaving in the summer and expects to shortly hear where her next posting will be.

“I want us to particularly think of those men and women who have concerns, to encourage them to l link up with the great network of immigration attorneys who are in our city to help them,” she said.  “Find advice, because there are solutions to be found. I’m certain of that.”

The chairman of the parade’s board, Dr. John Lahey, said he had never worked with a consul general who was more “interested and supportive” than Jones.  He also alluded to the ongoing dispute between the board of directors and some of the parade’s affiliated groups.

Though the main banquet room at Antun’s was packed with an enthusiastic audience, some groups chose not to attend the event in protest of what they say is the sidelining of the parade’s affiliated organizations by the board of directors. Among those not supporting their aides with a table were the AOH organizations from Nassau, New York and Queens counties.

John Dunleavy, the former chairman of the board’s Parade and Celebration Committee and for many years the public face of the march, was in attendance for a short while.  Dunleavy is suing Lahey and board member Frank Comerford in Bronx Civil Court, alleging that the board has acted improperly and that his demotion from the parade’s leadership in June of 2015 was the result of an illegally held meeting.

The Lavender and Green Alliance was out in force on Sunday.  “It’s great to be here after so many years of not being part of the parade, and this is something that we will always support,” Brendan Fay, founder of Lavender and Green, told the Irish Voice.

Fay and Kathleen Walsh D’Arcy, co-founders of the inclusive St. Pat’s for All march in Sunnyside, Queens, are readying for their parade this Sunday, and Fifth Avenue on March 17.  One of Lavender and Green’s leaders, Tarlach Mac Niallais, will become an official member of the New York City parade for 2018 with his acceptance of a position on the march’s Formation Committee.

“It’s really a sign of how far we have come. We’re part of the parade now,” said Walsh D’Arcy, who together with Fay was honored with the Irish Presidential Distinguished Service Award last December.

Close to 400 units will take to Fifth Avenue this year, making the march one of the biggest ever.

The NYPD has also confirmed that the parade will stick to its usual route and march past Trump Tower even with the heightened security presence since Donald Trump won the presidential election.

The parade added two new sponsors to its roster for 2017, Northwell Health and St. Leo’s College in Tampa, Florida. All of the parade’s other supporters, including Guinness and Heineken which had withheld their support in 2014 over the gay marching group ban, remain in place.

“The parade is a united parade. It reflects a united Ireland...the parade has been a unifying event,” said Hilary Beirne, the parade’s executive secretary and emcee of Sunday’s festivities.

Dowling said that leading the 2017 stands as the biggest honor he has ever received.

“When I got the call from John one morning a number of months back about being the grand marshal I have to tell you, it was pretty humbling and a complete surprise,” he said.

“I have received a number of recognitions over the years but honestly, this has to be the pinnacle of them all. It is very, very special indeed.”

Dowling also noted how he used to dream about the world beyond his small village in Limerick, where he was raised in poverty, the eldest of five children.

“You imagine what it would be like, what was beyond, and here we are today, all of us, in a position that way back when we probably never imagined we would be in. What an unbelievable world we live in,” he said.