The biggest problem facing the government in Ireland right now is the housing crisis. With house prices and rents soaring, too many people cannot find a place to live they can afford. 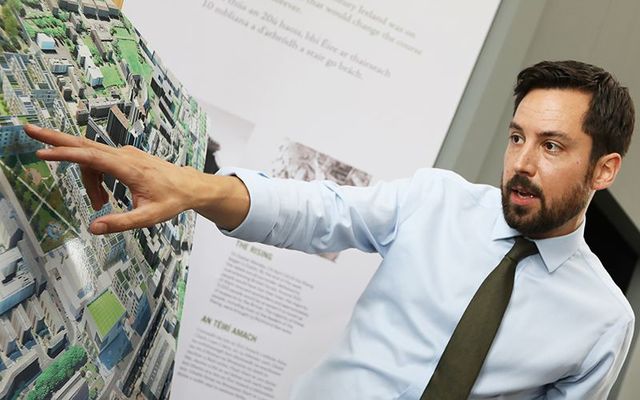 The biggest problem facing the government in Ireland right now is the housing crisis.  With house prices and rents soaring, too many people cannot find a place to live they can afford.

The simplistic answer put forward by many opposition politicians is that the government must ramp up the building of social housing.

That has to be part of the state response to the crisis.  But the truth is that the problem is more complex and is impacting people at both lower and middle social levels, including those who in normal times would be able to provide their own homes.  More social housing alone is not going to fix the mess we are in.

To understand what's going on, it's important to remember how the current crisis came about.  The financial crash here hit us exactly 10 years ago now and stopped all construction, both private and public.  Property prices collapsed, builders went bust, construction workers emigrated and private house building came to an abrupt halt.

As you know, the economy has recovered considerably in the last few years.  Private house and apartment building is underway again, but gearing up the construction sector is taking time because of a lack of manpower and cautious banks.  There is a huge backlog of demand and it is going to take at least another five years to catch up.

In the meantime, the lack of supply means that house prices are soaring again, putting them beyond the reach of many people (including average income earners) and forcing them to rent.  This has resulted in soaring rents, and many low-income families are finding themselves priced out of the rental market.  Even with the state-provided housing assistance payments, they can't afford the current rents in the private sector.

Those who can't stay with parents, relatives or friends then end up being homeless and are put in emergency accommodation paid for by the state while they wait for social housing to become available.  Up to 10,000 have now declared themselves to be homeless, adding to the pressure on the social housing lists which are already very long.  There are tens of thousands on these lists with a wait time of years, even for families with children.

It's a very difficult situation and it's going to take time to sort out.  Building more private homes will help more families to find their own accommodation once prices start to level off or even come down again.  And this will reduce the pressure on social housing waiting lists

One leading real estate firm here claimed last week that this leveling off in house prices is already underway, even if it does not seem that way to most people yet.  But the market will eventually come right.  Construction is now accelerating and sufficient supply will eventually bring down both house prices and rents.

There will always be a need for social housing, of course.  Prices and rents would have to fall a very long way from their current highs to be within the reach of many low income families.

But the angry demands for immediate social housing building programs on a massive scale from some politicians, particularly on the left, are superficial.  Even if the state had unlimited funds to throw at the problem -- which is not the case -- social housing will always only be part of the answer to our overall housing needs.

Yet little or none of this has been available to those most in need after the crash, the 10,000 people, including children, who are currently homeless and in emergency accommodation paid for by the taxpayer.

How can this be?  Two reasons stand out -- the tenant-purchase scheme which allows those in social housing to purchase their home from their local council, and successor tenancies which allow children of sitting council tenants to inherit their tenancies ahead of people on council waiting lists.

Although well-intentioned, the result of these arrangements is that much social housing built by local councils over the decades is no longer available to house those most in need.  Many rented council homes now have a couple of cars outside and house a family which may be relatively well off, with adult children who are also income earners.  And the children can inherit the tenancy.

On top of that is the huge number of former council homes which have been bought by tenants and so are also no longer available.

A charity organization here called the Community Foundation for Ireland recently did some research on this situation and made recommendations which should be taken on board before we start any major new programs to build social housing on a national scale.  Most important are the recommendations that both the tenant-purchase scheme and successor tenancies should be ended.

Coupled with an on-going assessment of the circumstances of tenant families, some of whom should be able to graduate into the private home market over time, this would ensure that social housing provided by local councils would always be available to those most in need.

The statistics speak for themselves.  More than 365,000 council housing units have been provided in Ireland over the past century, but two-thirds of all council housing is now privately owned after being bought through the tenant-purchase scheme which has been in place since the 1930s.

Between 1990 and 2016, over 40 percent of the 82,869 council houses built during that period were sold to tenants, often with a discount of up to 60 percent on the market value, the Community Foundation report says. The report acknowledges that this has made an important contribution to increasing home ownership.  But it points out that it has significantly reduced the number of council homes available to rent.

The Community Foundation is in favor of building much more social housing as a solution to the present crisis, but with the changes in terms outlined above.  It suggests that more social housing could be funded by allowing local councils to retain more property tax revenue instead of it being swallowed up by central government as happens now.

The way social housing rents are set and collected also needs to be reformed, the report says.  Currently rents are set at a low level and tenants pay rent based on income, which is frequently not enough even for local authorities to maintain the properties.

That and rent arrears were the main reasons why councils over the years operated the generous tenant-purchase schemes.  It was cheaper to sell council houses to tenants rather than pay for maintenance which was costing councils huge sums every year.

Rent collection has been a real problem.  Up to 20 percent of tenants in the four local councils in the Dublin area are behind in their rent, with many more than 12 weeks in arrears.

This goes on because there is no real sanction the councils can apply other than making the tenant homeless which creates other problems that cost the councils even more.  Controversially, the report says that there should be direct deduction of council housing rents from social welfare payments.

The rent arrears situation among a minority of tenants has continued despite the fact that rents are very low compared to current market levels.  The average monthly rent charged by councils in the Dublin area is around one-fifth of the current average market rent in the city.

The foundation believes that rents for social housing should be raised so that the rent reflects the cost of building the house and allows the council to repay the loans over a long period of time.  Families who can prove they are unable to pay should get a rent supplement from the state.

This is similar to the cost rental schemes for social housing that are now common in other European countries. The cost rental concept is that the rent paid by the tenant relates to the cost of building the house rather than its market value.

This results in lower rents, particularly since council repayments on the lower building cost can be spread over a long period.  The house stays in council ownership.

Last week Minister for Housing Eoghan Murphy announced plans for the first cost rental housing scheme which is to be built in the Inchicore area of Dublin.  It will involve the construction of about 470 homes, 30 for social housing with the remainder available on a cost rental basis for rent to low and middle income workers, earning up to €50,000 or €75,000 as a couple.  It is expected that the rents will be up to 25 per cent below market rates.

The ⁦@MurphyEoghan⁩ housing plan laid bare: Half of councils did not build a single unit of social housing in first quarter of year, including two of Dublin biggest local authorities, ⁦@thetimesIE⁩. Taxpayers paid €47m last year for homeless to stay in Dublin hotels pic.twitter.com/6eCPqe5vKW

This is an idea that could be an important part of solving our housing crisis here.  It is an alternative to the affordable housing regime that was imposed on builders which used to require all new developments to include a proportion of social and affordable housing.

In practice this meant that prices for all other units in a new development went up to compensate.  It did not work effectively, created problems and was abandoned some years back.

Making social housing work as it should means that it has to be limited to those who genuinely cannot afford to house themselves, rather than being an easier option for those who cannot be bothered to try.  After decades of social housing here there is now a culture of entitlement to a house among some sections of the community.

But life is not as simple as that and there is no magic money tree to pay for it.  Personal responsibility has to be part of the answer as well.