Guggi tells all about U2’s Bono and God

Bono's childhood BFF – and bestie to this day – Guggi gave an interesting interview to the Religion News Service agency about how Bono became so spiritual. 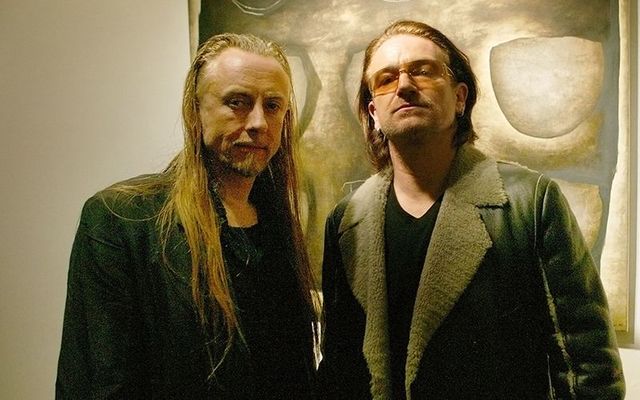 Guggi – official name Derek Rowan – grew up on the same Dublin road as Bono – aka Paul Hewson.  A year apart in age, Guggi being older, they bonded instantly, he said.

“Myself and Bono, we weren’t like the other kids in the street and we knew we weren’t,” Guggi revealed.

“I was seen as an oddball, a freak.  We didn’t know what to say when they would want us to name our favorite football players because we didn’t know any names. We could get beaten up for supporting the wrong team or not supporting anybody.”

Guggi is quite a renowned contemporary Irish artist. His latest exhibit is currently in Venice, California, at a gallery co-owned by Morleigh Steinberg, wife of U2 guitarist The Edge.  Guggi’s father was religious, a member of the Christian Brethren faith who encouraged Bono and Guggi to explore spirituality.

“My dad would send us to the YMCA where they had something called the ‘boys department’ where boys went — not boys and girls, just boys — and the boy's department went on a camp every year.  It was called camping, but it was more like sleeping bags on the rec room floor.

“We slept in tents maybe a couple of times, but it was mostly school halls, church halls, that kind of thing, and yeah, myself and Bono went there every summer.”