George Floyd protests - Tough times for cops all over

Anti-racism and any police protests in Ireland and the United States are bieng irresponsible and illogical. 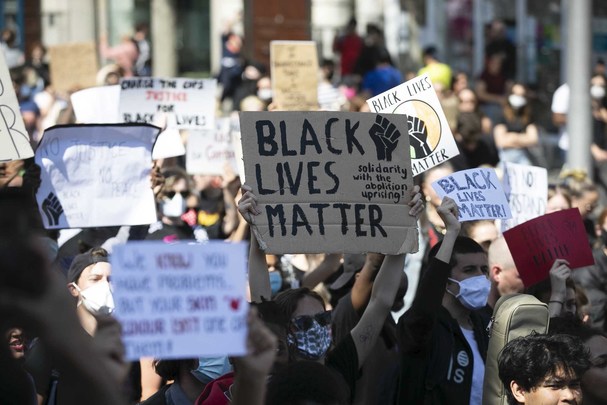 Protestors, especially those in Ireland calling for the defunding of Irish police need to look at the reality of George Floyd's death and see the real problems and positives that Ireland faces.

Hundreds of protestors gathered outside the U.S. Embassy in Dublin on Saturday in another demonstration in memory of George Floyd that really served little purpose.  The Mayor of Dublin and the health authorities had asked that the protest not go ahead since large gatherings of people are not only dangerous because of COVID-19, but are also against the restrictions laid down by the government to get us through the pandemic.

But the protest went ahead anyway, with some of those taking part making the glib justification that racism is an even bigger threat to them than the virus. That's a ridiculous claim, especially in Ireland, and their decision to carry on showed no regard for the safety of everyone else here.

Going ahead was also irresponsible since there had already been a protest in Dublin last week and there seemed little point in a second one -- the first was a larger protest march from the city center to the U.S. Embassy on Monday of last week.  That was also illegal and problematic because a few thousand took part and there was very little social distancing.

Just like people in other countries, everyone in Ireland was horrified by the video showing how Floyd died.  But the most common reaction to the protests here was anger at the way the COVID rules were ignored by people who reckon they have the right to do what they want despite the danger.  And that danger is still very real, with the number of COVID cases here now passing the 25,000 marks and the number of deaths approaching 1,700.

Apart from the obvious reality that demonstrations in Ireland will have little or no effect on racism in America, the posters being carried at the Dublin protests showed just how clueless some of the protestors are.  Most of them copied those seen in the U.S.  Black Lives Matter and I Can't Breathe, they read, as though black people were being killed here.

There were even a few posters demanding that the police here, the gardai, be defunded.  One carried by a young white guy went further -- Abolish the Police, Justice for George, it read.   How he thinks that makes any sense in the Irish context is hard to comprehend.

More than half of those on the protests here appeared to be white middle-class young people, probably students who don't have classes to go to at the moment.  Motivated by emotions rather than facts, they are the "woke" generation who never seem to be awake to reality.  They have adopted Floyd as their hero, despite the fact that he was a flawed individual with a disturbing past.

The media narrative about him, both here and in the U.S., has reduced this past to a summary that he had been in prison but more recently had been trying to turn his life around.  The facts are that he had been in prison not once but four or five times on various offenses, including drugs and robbery.  In the most serious case of aggravated robbery, he had threatened a pregnant woman in her home by shoving a gun in her stomach.

On the day he died he had fentanyl and methamphetamine in his system and, according to the two men from the shop where he bought cigarettes with an alleged dud bill, he was very drunk.

He did not deserve to die the way he did.  But if he was trying to turn his life around why was he on heavy drugs and why was he using forged bills?

None of this justifies the way Floyd was handled by the police and the way police officer Derek Chauvin pressed a knee on his neck for so long, resulting in his death.

But he was a very big man and he had been uncooperative.  He claimed to be claustrophobic when the officers initially tried to get him into the patrol car despite the fact that he had been sitting in his own car for some time without a problem before the police arrived.  If he had been fully cooperative at the beginning of the incident the likelihood is that he would be alive today.

Again, none of this justifies what happened.  Chauvin showed a lack of care and compassion and a level of incompetence that is truly shocking.   But there are complications in this awful tragedy which have been glossed over by the media and which are likely to be fully exposed when this case goes to trial.

Floyd did not deserve to die the way he did. But he was not a hero and certainly not the symbolic martyr figure that is being portrayed in protests in the U.S. and around the world, including Ireland.

His death has generated a huge level of anger at police across the U.S. and in other countries on the basis that racism was the real reason he died.  Is that justified?

What about all the traditional Irish American cops -- tough, but fair and friendly -- who put years into the service of the public?  And what about all the cops from minority backgrounds who are doing the same across the U.S. these days? Are they all racists?

As it happens, I have a nephew who grew up in Ireland but decided he wanted to be a cop in America -- he probably watched too many police shows on TV when he was a kid.  To everyone's surprise, he fulfilled his dream and has been a cop in New Jersey for the past 20 years.  He is a calm and caring individual, exactly the kind of person who makes a good police officer.

Despite being in a town with a high crime rate and a majority non-white population, he has done well and the department appears to be appreciated by all sides of the local community.  There was a protest there last week which, thankfully, was relatively peaceful.  I can't help thinking of him these days when I watch TV and see what police over there are dealing with.

One point is worth bearing in mind by the anti-Trump readers of this column.  The hateful mania being directed at cops across the U.S. in recent days is being used to attack the president as though he is directly responsible for the racism that is supposed to infect all the police forces there.

Whether you like President Trump or loathe him, this is too much even in an election year. The fact is that three-quarters of the 50 biggest cities in the U.S. are run by Democrats and have been for many years -- and that includes their police departments.  If there is a racism problem in police in the U.S. it's not down to Trump, despite his incoherent ramblings about "dominating the streets."

In Ireland, the accusations of racism in the police here which were made at the protests are idiotic.  The gardai, who are unarmed, show great patience and tolerance with lawbreakers and that applies whatever color they are.

The same is true of Irish society in general, even though we have gone from being a mono-cultural to a multi-cultural society (with over 17 percent of the population now born outside Ireland) in 30 years.

That rate of immigration in such a short period exceeds anything that has happened in other western countries (including the U.S.), and we have managed to do this without significant problems.  Having said that, most of our immigration here is from Eastern Europe rather than from Africa or Asia.

There have been a very small number of anti-black racist attacks here involving teenagers, but in general, Ireland is a welcoming country despite the pressures that immigration has caused in housing, health services, and schools.  In schools in particular, extraordinary efforts have been made to make new arrivals of all colors welcome and to cope with all the children who don't speak English.

None of this positive stuff was mentioned at the protests last week.  Instead, there was non-stop complaining about how racist Irish society is, allegedly proven by the continuation of our Direct Provision (DP) system for asylum seekers.  In fact, there were as many End Direct Provision posters as Black Lives Matter posters at the demonstrations.

We have dealt with the DP issue here before, but it is worth repeating some of the main points.  The system provides free housing, food, health care, and education for children as well as some spending money while claims for asylum are being assessed.

Overcrowding is a problem because of the numbers arriving.  So is isolation as some of the hotels and other buildings being used are remote.  Even so, the system works and compares well with arrangements in other European countries.

The most frequently heard complaint is that some asylum seekers are stuck in the DP system for five or six years, or even longer, waiting for their cases to be resolved.  But the reason is that when their initial application is refused after a year or so, they then take serial legal cases (using free legal aid) to challenge the decision and any attempt to deport them.  It's a good income stream for lawyers here and it works since very few asylum seekers are ever deported even if their claims are bogus.

The fact is that more than 90 percent of the arrivals here are economic migrants, not asylum seekers.  They come because our system offers them a far better chance of staying than they would have in the other European countries where they arrive first from their home countries and where they are supposed to seek asylum.

Those calling for the DP system to be ended never come up with an alternative that would avoid putting more pressure on social housing here which already has a waiting list of years for young families in most areas.  Nor do they suggest an alternative that would avoid creating an even more attractive open door into Ireland.  The DP system does need to be improved, but it needs to be done in tandem with legal changes that would enable quick and final decisions in asylum cases which are then implemented.

Overall, the protest marches here last week made little sense in the Irish context.  Yes, there is some minor racism here, as there is everywhere, but it's not a serious problem.

But at least the protests here were peaceful and we avoided the violence seen in the demonstrations elsewhere in Europe, particularly the thuggery in London.

Stereotyping police in the U.S. as being racist, violent goons is as bad as stereotyping African Americans as being lazy, feckless, drug-abusers who are overly dependent on welfare.   Some are, just like many white folks.  And some cops are pretty bad, just like the one who killed Floyd.  But the vast majority are doing their best and Irish Americans should know that better than anyone else.