Game of Thrones’ Aidan Gillen is everywhere including in King Arthur

His slate proves it: Aidan Gillen is one of the most hard working, consistently in-demand Irish actors in the world. 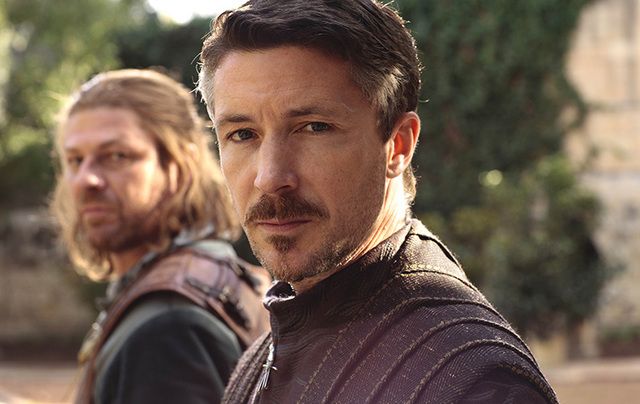 Aiden Gillen in Game of Thrones

His slate proves it: Aidan Gillen is one of the most hard working, consistently in-demand Irish actors in the world.

From his starring role as Lord Baelish in Game of Thrones to his turn as the villain in the forthcoming Maze Runner finale, to his appearance next month as Sir William, also known as Goose Fat Bill, in director Guy Ritchie’s sword and sorcery epic King Arthur: Legend of the Sword, it’s amazing Gillen has time to catch his breath between takes.

The roles don’t stop there, though. Soon he will join Cillian Murphy on the BBC’s period gangster caper Peaky Blinders, which began shooting its fourth season last month in Liverpool. It’s non-stop work for the 49-year-old who originally hails from Drumcondra in Dublin.

For someone so famous it’s interesting to notice that he’s clearly uninterested in fame itself. You can easily tell from his conversations, which are consistently thoughtful and understated, that he has no intention of becoming another Hollywood showboat with a rider longer than Ulysses.

Today he’s in South Africa filming Maze Runner: The Death Cure, the last installment of the multimillion dollar sci-fi thriller series that got held up from shooting when fellow star Dylan O’Brien was injured on set in an action sequence gone wrong.

“I’m not playing a villain in King Arthur.  I’m on the side of good. Goose Fat Bill’s a member of a secret rebel force. King Arthur (played by Charlie Hunnam) in this film is presented as a guy from the streets. In Guy Ritchie’s universe my character is really an invented creation,” Gillen told the Irish Voice in an interview last week.

They go up against a venomous, fascistic king played by a glowering Jude Law. “I don’t want to make it sound too heavy. It’s a fun film with a big action fantasy focus. It is quite dark; it’s soaked in the supernatural and tinged with myth,” Gillen says.

“But it’s also a gang caper. I’m the strong, silent type and I’m one of King Arthur’s gang.”

Did being Irish help him approach his celebrated Game of Thrones character, who isn’t powerful so must use his cunning to one stay ahead?

“I haven’t thought about that one in that way. I know the Irish did use language, as did any oppressed people,” Gillen says.

“But I don’t want to get into 800 years of oppression, I really don’t, and I’ve never really thought about it in terms of Game of Thrones. The thing about Baelish is that he definitely is an outsider and he has worked his way up and out of his class and into the higher echelons of the courts. He is very much still an outsider though, and he’s still pretending to be something that he’s not.

“We are never really sure where he came from and what he originally sounded like or what his family situation was. It’s not really explored in the show, although a lot of people are familiar with those and the books.”

“I don't know that it’s been exposed. I think we see a little bit of that. I think we saw a little of it with Sansa and her mother Catelyn Stark,” he says.

“He’d be a little less guarded. The one weakness that he has, the one era where he could be exposed or trip up is the emotional one regarding Sansa or Catelyn. But it hasn’t really been an issue. He hasn’t slipped up.”

A week before King Arthur: Legend of the Sword opens, Gillen will also appear opposite Debra Winger and Tracy Letts in the romantic drama The Lovers.

“It’s an interesting concept, really simple, although I haven’t really seen it before. A long married couple whose marriage has gone off the hot plate are both having affairs and during the course of the film they start to find each other. They start cheating on their lovers with each other,” Gillen reveals.

As for Peaky Blinders, Gillen says he can’t elaborate on the part he’s playing “because they’ve asked me not to,” but he’s very excited. “I love the show. It’s one of the better TV shows out there.”

Last year Gillen performed James Joyce’s The Dead at The Globe in London, and New York fans may want to hear he could come here with it later this year or in January.

“It’s a two person performance between myself and Fergal Murray (the Derry-born pianist and composer) and he’s written the music. It’s quite easy to listen to and it’s quite easy to tell. The more we do it the more interesting it becomes. That’s something that we really hope to do. We’re at the early stages of organizing that now.”

Fingers crossed. King Arthur: Legend of the Sword opens May 12.