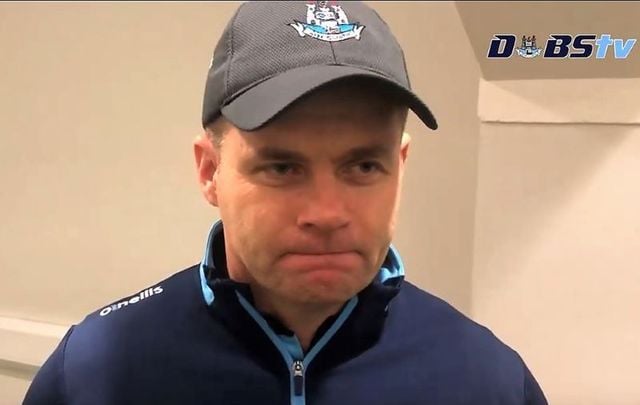 Dessie Farrell’s reign as Dublin manager is up and running – the new Sky Blues boss tasted victory for the first time in the job in Mayo on Saturday night, not that Dubs fans aren’t used to wins against the Green and Red of late.

Read More: GAA: Dessie Farrell does his own thing

And not for the first time, there was a controversial twist to the meeting between these two old rivals as home boss James Horan was outraged by the “game-changing” red card dished out to Jordan Flynn after just 15 minutes.

That straight red, for a foul on John Small, made all the difference according to Horan as Dublin ran out 1-11 to 0-8 winners even though their own Michael Fitzsimons was black carded 10 minutes from time.

“I’m very happy, it’s always a difficult place to come so we are delighted to come out with the two points for sure,” Farrell said as Mayo’s failure to beat Dublin stretched to seven years.

“We didn’t play particularly well in the first half and Mayo brought a lot of energy and intensity to it. We were slow getting out of the traps, but in the second half, we were much better.

“Even when we were down to 14 men ourselves, I think we had much better flow and tempo to our performance at that stage. So we are happy with how we closed it out.”

Reluctant to talk about Flynn’s red, Farrell was pleased with his own team’s discipline as they followed the draw with Kerry with the win against Mayo.

He added, “To be fair I thought referee Barry Cassidy did well, I don’t normally pay a huge amount of attention to referees. You are always going to get decisions that will go with you or go against you, so that’s the suchness of life or the suchness of sport, so you’ve just to get on with it and keep doing what you do.”

Horan is sweating on the fitness of Colm Boyle after he picked up a first half knee injury but he was more incensed by the decision to dismiss Flynn so early in the game.

Horan remarked, “Anyone I met thought it was very, very harsh. We started well and dealt well with the sending off in the first half. Our energy and tackling was good.”

Elsewhere in Division 1, new Monaghan boss Seamus McEnaney admitted that what’s seldom is wonderful as his team enjoyed a rare 1-12 to 0-11 win over Tyrone in Castleblayney.

“It’s only my second win against them,” McEnaney said. “An oul’ National League game in 2010 in Inniskeen, I could nearly tell you the date and time! I was on the end of it the other way enough times, lads.”

Red Hand boss Mickey Harte was again without Cathal McShane as the ace forward edges closer to a move to Aussie Rules football.

“I always said I wouldn’t give up hope until I was sure that he had signed an alternative arrangement,” said Harte. “I’m not sure that that has happened right yet, but I know that it’s on the agenda.”

Two games into the new league season and Meath are already in relegation trouble as Donegal handed them a lesson in efficiency in their 3-8 to 0-7 win at Pairc Tailteann with goals from Odhran McFadden-Ferry, Michael Murphy and Michael Langan.

“Certainly, taking two points away from home in Division 1 is a good day,” said Donegal manager Declan Bonner. “I felt the first 15, 20 minutes, maybe there was a small bit of a hangover from last Saturday, but from there on I thought we were in complete control, to be honest, and probably should have got a few more scores on the board. That’s the only disappointing factor.”

Kerry got their first win of the season but only just as they beat Galway by 1-15 to 2-11 at Austin Stack Park in Tralee as the hosts came from three points down to grab a late winner via Killian Spillane after Cillian McDaid’s 63rd-minute black card hurt the Tribesmen.

Galway boss Padraic Joyce admitted, “A black card is now huge. It was deserved and it had an effect. That’s Cillian’s third one this year. He needs to smarten up a bit on that.”