Full credit to Enda Kenny and to Mayo

"Kenny magnificently played his own Fine Gael party and the entire political system here just as skillfully as he captured that big Moy trout all those years ago." 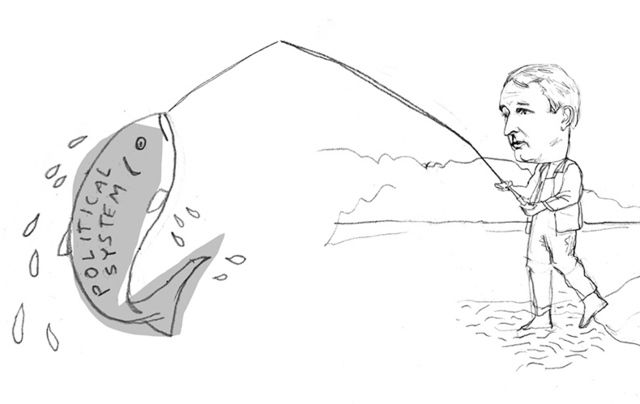 Praise from me for anything or anyone connected with Co. Mayo is as scarce as hens' teeth. Many of you will know I've often written here and elsewhere indeed about how I have constantly been outsmarted in that county and how I mentally gird up my loins any time I have to go there.

At the same time, one has to give credit where credit is due, and that is where I am coming from now in relation to our wily, soon to be former Taoiseach Enda Kenny from Mayo.  Fair play to him indeed.

Incredibly, he was photographed taking part in a lengthy charity cycle on home ground some days ago and he still looked nearly as youthful and fit as he did in the first shots I ever saw of him many years ago now.

These were the by-election shots of Enda when he was selected by Fine Gael to fight to succeed his late father Henry in parliament. I recall them clearly. The recently qualified young schoolteacher Enda, in a pair of huge waders almost up to his Adam's Apple was fishing in the River Moy, and clearly had hooked a big trout.

My reaction then, as a hack who would be covering the by-election, was that he was not man enough to fill the huge boots he had inherited, that he was more backbench fodder for his party following his certain election, that he would be happier teaching high infants in his small school and catching trout in the Moy, and that the country would have forgotten his name inside six months. How wrong can you get it?

And now, Kenny magnificently played his own Fine Gael party and the entire political system here just as skillfully as he captured that big Moy trout all those years ago.

He is now the father of Leinster House as the longest-serving member, is the longest serving leader his party has ever boasted, has revived that party from its doldrums of recent times, incredibly enough was supported by historic enemies Fianna Fail in the business of a minority government, and still, in his sixties nowadays, has time to climb on his bicycle for a charity cycle though Mayo.

All that as well as coping with the significant challenges posed by Brexit, a drastic housing shortage nationally and a very difficult problem in relation to our policing system. Much more too but no bother to the man at all.

He said a long time ago that he would not lead his party into the next general election. He said he would tell his colleagues exactly when he would hand over the reins to a new leader, and that’s just what he did last week.

There’s been hot speculation about his likely successor for some time, with the leading candidates being Leo Varadkar and Simon Coveney. The old problem for them was that there always appeared to be an imminent issue every second day which required Enda's experienced skills on the political rod and reel.

The contenders were afraid to rock Enda's boat for fear of negative consequences for their leadership campaigns. They were wearing the waders as Enda smiled broadly when he came back from European summits of great importance, or shook hands with Prince Charles of England on the verge of the graves of Michael Collins and Eamon de Valera.

Recent speculation raised the prospect of Enda being needed at the helm of the ship of state until the summer recess.  But that is not to be, and now, if reports are accurate, it appears that Varadkar will be taking his place.

Regular readers here will be aware that, despite all the times I've been outsmarted totally in Enda's territory of Mayo, I have also grudgingly given full credit to Mayo folk for their shrewdness and resilience and sheer survival energy both on this island and in the diaspora.

My father used accurately say of Mayo people that they "could mind mice at a crossroads," and that is surely true. Enda is in full charge of his own crossroads now in every sense.

And I have predicted here already that when he does leave Dail Eireann he will not ride quietly away into the sunset either. He will be urgently required by his European colleagues in Brussels for some high-ranking post there.

It may well emerge, as Britain commences its Brexit bargainings that our Enda in Brussels will be in a position to cutely reduce the negative impacts of that move on the Republic of Ireland.  For a wily Moy fisherman, that's just landing a bigger fish.

Finally, a connected fact about the special shrewd qualities that abound in Mayo and which are typified by this political career.  The county is on what is now called the Wild Atlantic Way, with the Atlantic constantly eroding the edge of Enda's constituency.

Recently that Atlantic force worked in a fashion to expose again, after many years, a small beach at Dooagh on Achill Island. That kind of thing happens often enough along the coast, but no other coastal communities in other counties ever availed of the event as dramatically quickly as the Mayos.

Inside days the event was international news, making headlines everywhere. Now the tourists are flocking in to enrich the local economy hugely as the summer season begins.  That's Mayo for you.

Nobody is heeding the marine experts pointing out that it is possible, maybe even probable, the new Dooagh beach could be washed away again this winter.  Maybe the taoiseach will be filmed fishing there one of these bright evenings catching another big fish!