Fascinating week of brilliant programing at the Fleadh Cheoil (VIDEOS)

Ennis, County Clare: "I tried hard to hit as many concert gigs during the Ennis Fleadh Cheoil." 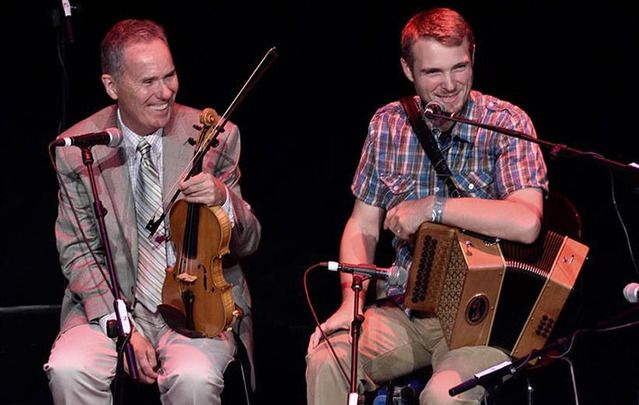 Seamus Connolly and his nephew Damien Connolly in Ennis.

Ennis, County Clare: Regular readers will know I am a festival fiend, so you won’t be surprised that I tried hard to hit as many concert gigs during the Ennis Fleadh Cheoil as many of the choices were right up my hard-core trad alley.

Since the All-Ireland Fleadh expanded to a nine or 10-day feast in recent years, fleadh executive committees have turned to experienced trad programmers to expand the offerings leading up to and surrounding the competitions on the final weekend. This “festivalization” of the fleadh has become hugely important in a number of ways to offset the huge costs in running a fleadh these days, especially when purpose-built domes are employed to both protect against the weather and to expand seating for the big draw of the week, the senior ceili band competition.

So when Shannon Airport stepped up as a sponsor for the main dome ($110,000) dubbed the Shannon Aerodome, seating over 2,000 people, it made it possible for a first rate facility to be there all week and open it up to larger concerts to further defray costs.

Padraic O’Reilly from nearby Corofin, who has been successfully programming a small but highly regarded boutique festivals centered around traditional music and musicians for over a decade, was the right man for the job this year in Ennis.

He started from a premise that as much as possible it would be Clare-based music and musicians who would be showcased for gigs, which would also prove the point that trad music could attract the right sized crowds among the Banner trad zealots and fleadh visitors.

Twenty-eight such concerts were organized for the Aerodome, Glor, Danlann An Clare Hall and St. Columba, and all attracted respectable if not sold-out crowds including the last five nights at the Aerodome.

With acts like Beoga and Cruinniu, the supersized Kilfenora Ceili Band stage show, Maura O’Connell and Stockton’s Wing (hometown favorites), senior ceili band competition and Joanie Madden and Cherish the Ladies, tickets were very much in demand every day.

With the Shannon Aerodome handling the heavy freight concert-wise, Ennis’s versatile performing arts center venue, Glor, could be utilized for smaller concerts in the evening.

Since it is a commercial theater operation, its partnership with the Fleadh Committee was a most welcome addition where tickets needed to be booked, printed and paid for by patrons all over the world. The staff there couldn’t have been more professional and welcoming all week, and it was quite an asset.

In particular, my favorite place to be midday was in attendance at the excellent “Fiddle Beo” series from Monday to Saturday spotlighting seven Clare fiddlers of note. Programmer O’Reilly remembered a series created by Vincent McMahon some years back and revived it for Glor afternoons every day at 1 p.m. for an hour or so.

The very attentive and knowledgeable audience members averaged about 250 per day, building to a sellout for the last concert on Saturday with a reunion of Seamus and Martin Connolly from Killaloe that brought in 450 people.

On Wednesday it was double the pleasure with the exquisite fiddle tandem of Tony Linnane and James Cullinan accompanied by Carol Talty Cullinan on piano. Their tight, almost note for note playing and silky smooth technique stood out all the more in contrast to their shy humble demeanor for two such talents who exude the pure drop in its highest degree in Clare.

On Thursday, the venerable Vincent Griffin from East Clare, who won the senior All-Ireland Fiddle Championship 60 years ago at the first fleadh in Ennis in 1956, was on display with concertina player and music historian Timmy Collins and Padraic O’Reilly in accompaniment, both acknowledging a master Clare musician who influenced many fiddlers down through the years.

On Friday Siobhan Peoples was featured, and what a delight it was to hear her in a concert setting different from the many pub gigs she anchors around Ennis. Listening to her fine grasp of tunes along with her frequent box player Murty Ryan, accompanied by Brian Mooney on bouzouki and watching the musical simpatico with Peoples and Ryan was a treat and something I will look forward to seeing wherever I find them.

The Fiddle Beo’s conclusive concert on the rainy Saturday was Seamus Connolly, who emigrated to Boston over four decades ago to establish himself as one of the foremost Irish fiddlers in America (which he was also in Ireland before he left, winning the All-Ireland championships many times and the Fiddler of Dooney prize).

Joining him was Martin Connolly on accordion and Martin’s son Damien who plays both the fiddle, and the accordion and like Seamus has made his home in America for a number of years.

Seamus Connolly is a U.S. National Heritage Award winner (2013) for his tradition-bearing work as a teacher of Irish music with Comhaltas and lots of other fiddle camps, and director of Boston College’s Gaelic Roots from which he retired last December.

Many in the audience turned out to greet the returned master and hear the tunes that made him a legend, and it was an added bonus to see not only he and Martin sharing tunes with Damien, but the icing on the cake was when young Colman Connolly (Damien’s son) spelled Geraldine Cotter on the grand piano to accompany the elder Connollys for a three-generational set.

The Fiddle Beo series was an inspired addition to the program and masterfully introduced by its creator McMahon all week.

The evening concerts in Glor were also spectacular, staring with Boffin to Burren on the opening night with an all-star cast that had appeared at other fleadhs.

Monday night the unstoppable Martin Hayes compered an evening of East Clare music that began with the youngest Tulla Band to be competing later in the week, followed by Andrew McNamara and his sister Mary McNamara with her children Sorcha and Padraig Costello for a family set.

Martin and Dennis Cahill played riveting set in the second half followed by the Tulla Ceili Band celebrating 70 years this year, with Martin sitting in on the band which he once aspired to join.

Saturday evening at Glor was a most historic occasion arising from an idea from accordion player Paul Brock (of the Brock-McGuire Band) aided by Dr. Mick Moloney on the legacy of the Flanagan Brothers from Co. Waterford who settled in New York a century ago.

On Friday a plaque was placed on their homeplace back in Waterford with 38 members of the Flanagan family in attendance who made their way to Ennis for a lecture by Moloney, followed by a concert with the Green Fields of America and the Brock-McGuire Band. At its conclusion the Flanagan family presented the first annual perpetual award to Moloney, whose research and interview revived their rich legacy in Irish America.

It was a fascinating week in Ennis for concerts and wish that I could have seen more, but I thoroughly enjoyed what I did see thanks to the brilliant programming folks and partners who made it all possible.