"There was the arrival of big burly shepherds and... some of them even knelt and bowed to the youngling in his mother’s arms." 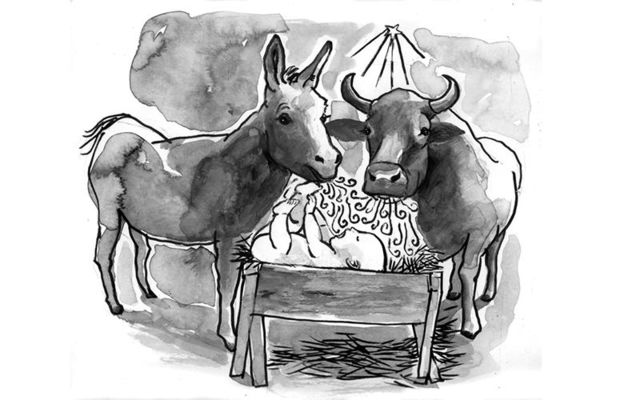 Ruth and Barnabas, a donkey and an ox, witnessed the special birth of Jesus Christ, on Christmas. Caty Bartholomew

Once upon a winter evening ages ago in a mountainy village called Bethlehem which few of us know much about, a huge problem arose out of the blue for the two regular occupants of a small cabin on the edge of the town. Their evening was quite destroyed by all that burst upon them.

One of those animals was a donkey mare called Ruth. The other was a huge ox called Barnabas. They had always lived quietly there together until this December evening.

It began when a very young slip of a girl, almost certainly an unwed mother, came weeping through the open doorway and already in the early stages of childbirth. She was accompanied by a large mountainy man, some kind of guardian, and she was hardly in the stable for 10 minutes before, in significant distress, she gave birth. The mountainy man gave her all the aid he could during the process.

Immediately after the birth he left the infant down into the manger, naked and crying loudly and shivering, and then concentrated upon the mother. The major problem for Ruth the donkey and Barnabas was that he left the infant down directly on top of the straw in the manger that was their dinner that evening, and they were both ravenous. But the manger was small so they could not reach their dinner without moving what Ruth the donkey instantly called a youngling.

Barnabas suggested that they throw the youngling out of the way and then enjoy their dinner. Ruth, however, already a mother several times herself, was somehow touched by the state of the youngling and stopped him from doing that.

They stood with their heavy heads over the manger as the youngling wept loudly atop their dinner. Their steaming breath on a cold evening surrounded the youngling like a white cloud.

“The small yoke,” said Barnabas, “would surely die from the cold in a couple of minutes anyway. He had never before seen anything so small and skinny.”

Ruth said, after a little while, that the youngling seemed to be warming up a bit from their breathing upon it. It seemed to be crying less loudly.

They should continue to do that, and lick the small wet body dry, until the big mountainy man got some sense into his head and came over to put some clothing or other on the youngling and bring it over to the new mother to be fed.  Then they could enjoy their own dinner.

Barnabas grunted but agreed. And that is what they did, the two of them, for the better part of the next 10 minutes and indeed, towards the end of that time, the youngling almost entirely stopped crying and shivered a lot less. But the pair of animals was still without their dinner.

What happened next was surprising indeed. The youngling settled and reached up and touched the donkey’s warm soft nose.  And, dammit, did not something that scientists of later centuries would call spontaneous combustion not happen.

A quick flare of bright white light ran down Ruth’s spine, and then across her forequarters to create the shape of the kind of crucifix the Romans down the road used often.  And she shuddered on all four hooves, did Ruth, and when she spoke again to the ox she spoke with a great urgency.

“Barnabas,” says she, “this youngling is out of the ordinary altogether. Look what happened to me there. We have to keep him alive because I swear he is going to be some class of a king or leader of the humans if he lives.

“Let’s keep him as warm as we can with our breathing until that big eejit in the corner comes over and covers him and gives him to his mother to be fed. We can’t let him die even though he’s very close to it this minute. Breathe deep Barnabas and lick his legs and I’ll do the head and shoulders. Keep going.”

And they did keep going.  And the youngling stopped crying.  And the mountainy man came over and wrapped some garment around it and brought it over to the young mother.

And, incredible as it seemed to the two resident animals and lifesavers, the next thing was that the whole world around the village seemed to explode with bright lights in the sky and the kind of singing you hear in chapels.

There was the arrival of big burly shepherds and, worst of all, the stink and reek of big desert camels leaked into the stable and, next thing, the place was full of strangers that included three men wearing posh clothes, rings on their fingers and all, and pressing gifts of every kind upon the mountainy man. And some of them even knelt and bowed to the youngling in his mother’s arms.

And, best of all for Ruth and Barnabas, one of the local shepherds put extra straw into their manger when their own was gone.

Said Ruth quietly, “I knew that youngling was special.”  She was probably right.

To cut a long story short, things worked out mighty for both Ruth and Barnabas a couple of days later.  The mountainy man had his pockets filled with gold coins from the three posh lads, so he bought both of them from the lad in the crowded inn that owned them. Ruth carried the mother and the youngling back on her back all the way to a village called Nazareth that few of us knew much about either, and the mountainy man drove Barnabas before him all the way back home.

All that happened for sure. There is a related story that I cannot vouch for but did hear and it claimed that it was a grandson of Ruth’s, years later, that bore the so-called youngling on his back through the crowded cheering streets of the city of Jerusalem.

And that donkey too, on that triumphant day, like all his bloodline, had the black crucifix etched on his back as well.  Maybe the shape of things to come.

After all that can I wish all of you a serene and happy Christmas and mean it from the heart. We will resume our journey along the Wild Atlantic Way as soon as things settle back to near normal.