Eric Trump on Ireland and the Presidential family, including his Irish nanny, Dorothy. 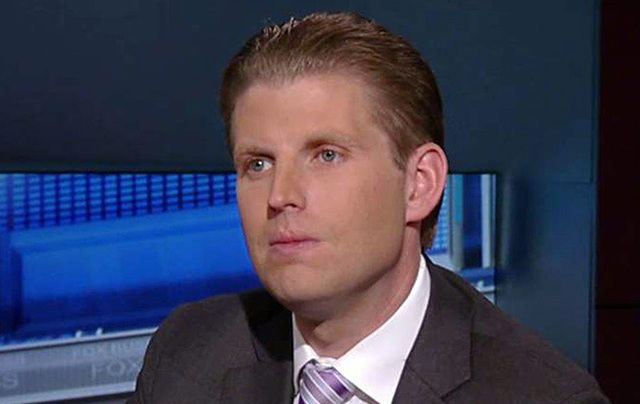 Bono had a go at Donald Trump more than once prior to the November election – in September he asked if voters were willing to “gamble the American dream” by supporting Trump – so hitting back at the Irish superstar probably made First Son Eric feel pretty good last week while he was in Ireland visiting the family’s Doonbeg golf resort. In an extensive interview with the Sunday Independent, Eric was happy to have the chance to refute Bono. "The American dream was running away very, very quickly. I think Bono got it exactly wrong," young Trump said.

Eric also intimated that Bono is a rich rock star who wouldn’t have a clue about ordinary Americans. "In all fairness, it is very easy for Bono to say that the American dream ran away as he sings from a stage for $5 million a night. I mean, give me a break!"

Seems like Bono won’t be invited to the White House anytime soon, but Trump family pal Rory McIlroy is still in the good books, even though the groom-to-be said he’d think twice about playing golf with President Trump after he got stick about it earlier this year.

"Rory is an amazing guy. He has been a great friend and… we have gotten to know him very, very, very well over the years. And, by the way, he has been an amazing ambassador for Irish golf and he has done a lot for charities in Ireland. He's just a good guy,” Eric said.

Though the Trumps aren’t Irish by blood, Eric considers himself a son of the Emerald Isle thanks to the guiding influence of the family nanny, Irishwoman Dorothy Curry.  She took care of the three Trump elder kids while their parents were working, and Eric loves her.

"She is a second mom to me and a really amazing person.  I used to come to Ireland for some of my summers and I would stay with her for a couple of weeks in her family home in Cavan. I have amazing memories from that time,” Eric said.

"Dorothy came in when I was probably less than a year old and took on that role and now she has known my mom for 30 years and my mom and herself are still inseparable. She's a massive part of the fabric of our family. I mean quite frankly she sacrificed her entire life for mainly myself, but really the three of us. She never had kids. We were her kids. So we were very, very close and still are to this day.

“So I feel like I have a lot of Irish heritage in me based on her, based on the fact that I was coming over here with her every single summer. And, again, it wasn't like I was going to Dublin and staying in some hotel. I mean this was real Ireland. She would take a car and we drove all over Ireland together -- it was a lot of fun."