Does the NRA really want a Civil War in the USA?

Something happened in the US that should scare the pants off you and it’s going to get people killed. 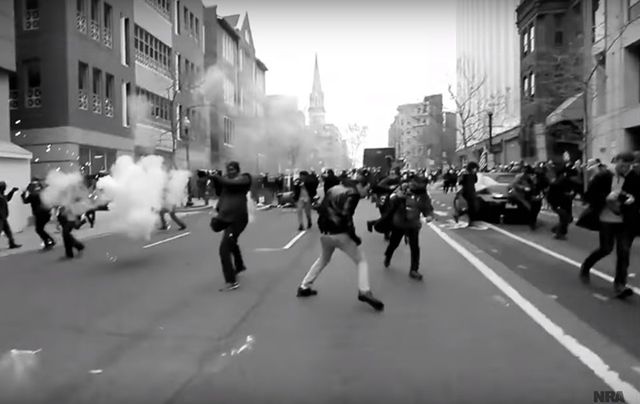 A still from the NRA's latest advert inciting the use of a "clenched fist".

Something happened last week that should scare the pants off you. It involved a literal call to arms made by the National Rifle Association (NRA).

If that didn’t give you the vapors she’s got more. “They use their movie stars and singers and comedy shows and award shows to repeat their narrative over and over again,” Loesch warns us, using the kind of political shorthand that targets Hollywood.

Finally she comes to her real point. “The only way we stop this, the only way we save our country and our freedom is to fight this violence of lies with a clenched fist of truth…”

Our country, our freedom, apparently now depends on crushing “our” enemies and their political “violence” with a clenched fist of truth – or, you know, with a AR-47, which the NRA have fought for years to ensure you can purchase right quick.

This story flared up and caused uproar instantly, but it’s the nature of our news saturated new century that it can’t hold our focus for as long as it really should.

That’s a shame because the people it most wanted to incite have been listening intently. For many the increasing racial, religious and social diversity of modern America is a threatening and even displacing new reality.

The NRA speaks directly to these citizens over the heads of every other one of us. Recall, by the way, that it’s just weeks since an unhinged man took a rifle to attack members of Congress at baseball practice in Alexandria.

So how does the NRA respond to yet anther mass shooting? By attempting to frighten their supporters into a state of near siege, where presumably they’ll want to stock up on even more rifles.

But on its Facebook page this week even longtime NRA supporters were expressing shock and disquiet about its ominous new approach.

“Maybe I’m reading to much into this but out seems you are actively fermenting hate against fellow Americans, all for the sake of membership. I see no other reason for such a horrific video.”

Other posters were equally forthright. “The NRA has officially become a terrorist organization. I used to be a proud member of the NRA in my youth and shot competitively. Myself, my grandfather and father are all marksmen. All of us have given up our NRA memberships because the organization has devolved from a service-oriented group to a gun manufacturer lobbyist group. Pure, unpatriotic trash,” another wrote.

Permit me my own experience here. I grew up in the north of Ireland so I know a demagogue when I see one now, having seen them and the damage they do up close for most of my life.

They speak so forcefully and so one-sidedly that those listening are often inspired to follow their arguments through to their often violent conclusions.

Recall that Ian Paisley never lifted a finger to fight in The Troubles, but he inflamed the heads and hearts of thousands until they carried out what he had only prophesized, often with fatal results.

For most of his life Paisley lived, figuratively and literally, in a divided state whose divisions he only wished to maintain, not end.  Loesch clearly lives in the divided American nation of her hateful ad.

In the NRA’s cartoon portrait of liberal America, liberals are not only seeking to destroy the Trump presidency but also the country. This is making a direct appeal to the cultural and economic resentments out there in the heartland where the teach boom has been a complete bust.

The NRA ad is telling those who already feel deeply aggrieved that there is a dark conspiracy abroad to cheat them of their promised futures and deprive them of their natural born liberty. It is being heard clear and strong in the places where it was pitched. It is going to get people killed.