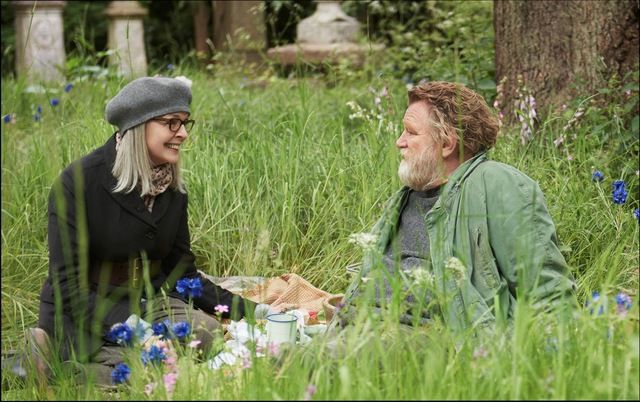 Oscar winner and Woody Allen muse Diane Keaton stars in Hampstead with Dubliner Brendan Gleeson, on release in Ireland and the U.K. this week, and the famed actress told The Irish Times she loved working with her Irish co-star, even though she wasn’t too familiar with him at first.

“I didn’t know many of those films he was in. Harry Potter? Right?” she told The Times. “But before we did it I saw In Bruges and he’s so great in it. Heartbreaking and scary.” Keaton, who won her statue for Annie Hall in 1978 – Gleeson has an Emmy Award for his portrayal of Winston Churchill in the acclaimed 2009 HBO film Into the Storm – heaped praise on the widely-respected Gleeson.

“He’s such a decent person,” she said. “And he has patience for people who are different. I liked him a lot. You’d think it wouldn’t work. He’s classically trained. His stage skills are excellent. That cannot be said of me. It’s a different way, but it doesn’t matter.”

Some are comparing Hampstead to the popular rom-com Notting Hill that starred Julia Roberts and Hugh Grant back in 1999. Hampstead, like Notting Hill, is a town in the center of London, but the film of the same name will not likely reach the heights of the Julia-Hugh offering, even though the theme is kind of the same – an American woman in London who finds true love in the arms of a local.

According to The Hollywood Reporter, “The story sees Keaton play an American widow living near the picturesque Hampstead Heath in the British capital, who one day stumbles upon Gleeson’s reclusive, shack-dwelling recluse. When his home comes under threat from property developers looking to build luxury flats on the land, the two join forces to fight off the threat.”

There’s no release date set yet for the U.S., and the reviews so far have been unkind, so we might not see a broad opening here.

Can this be the next Notting Hill?