All roads for Democrats led to Miami last week with the first of the presidential debates taking place. 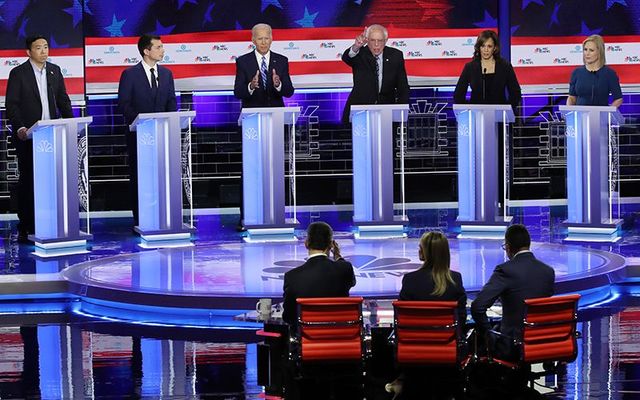 All roads for Democrats led to Miami last week with the first of the presidential debates taking place. The outcome could hardly have been predicted going in as party members seemed in the main to be settled on safe Joe Biden as their pick.

However, a scintillating debate on the second night created a brand new star name as Senator Kamala Harris proved to have magnetic stage presence and a fairly good right hook too as she dropped Biden in deep doo doo over his past stance on bussing. Biden’s folks cried foul, but they must know this process ain’t beanbag.

On the previous night, Senator Elizabeth Warren had easily held the stage but created nothing like the wallop that Harris delivered.

The two women were handsomely rewarded in a new CNN poll this week which showed Biden on top at 22 percent, Harris second at 17 percent and Warren third on 15 percent.

That is a change of massive proportions from pre-debate polls which had Warren and Harris in single digits and Biden leading by 10.

Read more: Sympathy for US border migrants is not enough

Of course, there is already speculation that Biden is the Jeb Bush of this race, unbeatable until the clash actually begins.

Biden was bound to lose ground, but it would be unwise to write him off just yet. He had been forewarned after cruising into the debate, and he sounded rusty and out of sync.

Remember, though, he has been out of the firing line for close to two and a half years at this point and was certain to show some ring rust.

Both Harris and Warren are floating on a comfortable high before any in-depth scrutiny. Consider the case of Mayor Pete Buttigieg, who had made dramatic advances before the killing of a black man by a police officer in his town of South Bend suddenly slowed his candidacy. It is noticeable in the polls that despite favorable reviews at the debate, he hardly inched upward.

A much-overlooked part of debates is stagecraft, the ability to project on TV, something Donald Trump is a master of.

Trump himself says he watches his performances with the sound off to see how well his body language is working. Roger Ailes of Fox News fame hired new talent by doing the same thing.

In that respect Warren suffered, disappearing for the second part of the debate and never projecting that larger than life presence.

Harris, on the other hand, appears to have that star quality, that oomph in her presentation and style. Mercifully, she does not appear rehearsed and it is titillating to imagine her prosecuting the case against Trump on stage with him.

The fact that she is a woman, African American, and Indian, makes her as true a representative of the mosaic of America as any candidate ever, in stark contrast to white bread Trump.

As for the lesser candidates, it was a good night but not rewarded in the polls for Senator Cory Booker, a poor night for Beto O'Rourke who seems to have left his oratorical skills behind him in Texas, and also for Senator Bernie Sanders whose sequel to Grumpy Old Man I is not going as well as the original.

The most annoying debater was Senator Kristen Gillibrand, whose constant interruptions reached a nine on the irritating scale. Likewise, New York Mayor Bill de Blasio embodied the rough and gruff spirit of the city he represents, but judging by the CNN poll it hardly seemed to matter.

The Colorado and Washington State candidates were relatively anonymous, while Marianne Williamson was the unconscious comedy act of the night, vowing to overcome Trump with love -- rather like trying to marry a shark.

They will get to do it all over again later this month, after which the big cull begins. Based on the first debate Harris has become a slight favorite.