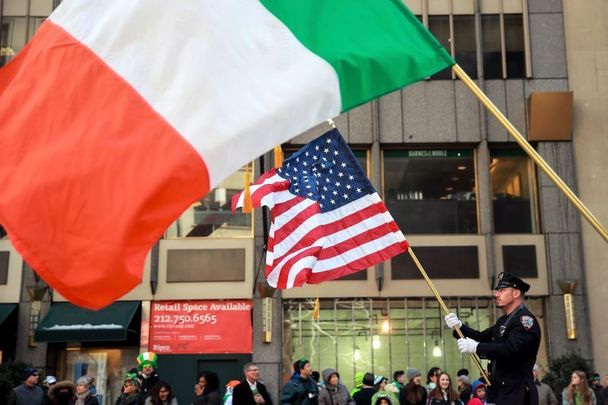 Patrick Duffy was a carpenter in the Bronx, whose wife Mary (nee McGarrell) was about to give birth.  It was 1933, arguably the height of the Great Depression.

It’s fair to assume Pat and Mary had modest hopes for their son. A decent education leading to a steady paycheck.

Little did they know all the things their son, Kevin, would see. Things that, in retrospect, make Tiger King look as bland as a shampoo commercial.

With New York and New Jersey the epicenters of the coronavirus outbreak, it was inevitable that Irish communities would take some tragic hits.

And so, this week, we remember two very different, very colorful figures who died this month, both (according to published reports) from coronavirus complications.

You can say a lot of things about these two men -- Kevin Thomas Duffy out of the Bronx, and Gerald Vincent “Jerry” Lynch out of Bayonne. The former was 87, the latter 95.

What you cannot say in any logical way is that their lives were “lost.” By all accounts, their lives were energetically lived -- eventfully, colorfully, dramatically.  That is no small thing, as we meander through yet another day -- whatever day it is -- in our masked and quarantined fog.

Remember when there were high-profile mob trials? Duffy, a Fordham grad, appointed a federal judge by Richard Nixon in 1972, had the best seat in the house for the 1985 racketeering trial of several New York organized crime figures, among them “Big Paulie” Castellano, reputed boss of the Gambino crime family.

One of Castellano’s more unlikely moves was striking an alliance with a group of wild Irish hoods whose turf for decades had been the West Side of Manhattan, hence their name, “The Westies.”

Mob lore has it that Castellano himself sat down with Westie leader Jimmy Coonan, while also telling Mickey Featherstone (whose cooperation with law enforcement later toppled Coonan), “You guys got to stop acting like cowboys, acting wild. You're going to be with us now.”

Anyhow, on December 18, right in the middle of the mob trial over which Duffy was presiding, Castellano decided to hit Manhattan’s East Side for a dinner at Sparks Steak House.

The rest is mob history.

Castellano and his driver Tommy Billoti were infamously photographed, bloody and bullet-ridden outside their limo on East 46th Street.

Duffy would go on to preside over a number of high-profile federal cases. There were the trials of the first World Trade center bombers, in 1993, all whom Duffy ended up hitting with sentences of over 100 years.

Then there was the infamous St. Patrick’s Day parade case, which found that the Ancient Order of Hibernians, as a Catholic organization, had a constitutional right to bar gay and lesbian groups from marching.

Whatever your feelings about who can or can’t march in Irish parades, that the son of a Bronx carpenter could preside over such cases for nearly five decades is extraordinary.

As was the long life of Jerry Lynch, the grandson of immigrants from Cork, who was remembered in the Star-Ledger newspaper “as one of the great tenors in the state of New Jersey.”

Lynch parlayed his talent into a number of Broadway gigs. In 1951 he joined fellow Irish American Ray Bolger, the scarecrow in The Wizard of Oz, in a production called Where’s Charley?

Later in life, Lynch became a prominent business owner in the Jersey Shore area, active in a number of bars, restaurants, hotels and other establishments.

But, as the Star-Ledger added, “What made Jerry most proud was his role in establishing what is now known as the Belmar-Lake Como St. Patrick’s Day parade.” First held in 1974, it is now easily one of the biggest in the state.

Such things seem like relics of an ancient civilization. A lost world.

I hope we can find them again.