Best of the Irish at the Irish Open fall behind pace

Waterford youngster Robin Dawson was next best of the Irish in a tie for 30th, with Shane Lowry, Padraig Harrington and Seamus Power well off the pace. 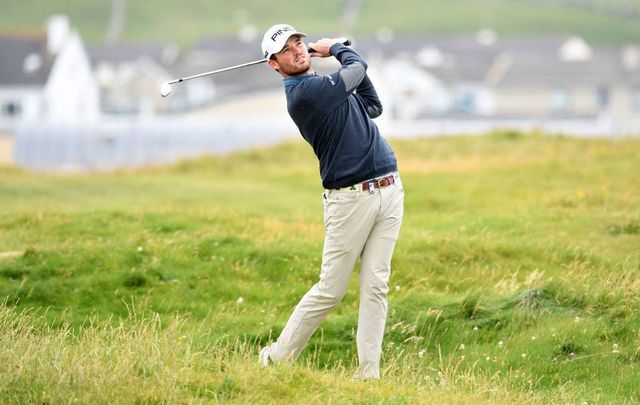 A young man from the County Down led the way as far as the home challenge was concerned as Spain’s Jon Rahm won the Dubai Duty-Free Irish Open at Lahinch on Sunday – and Cormac Sharvin deserved his place in a spotlight normally reserved for Rory McIlroy.

Well versed on the demands of links golf from his days learning the game at the Ardglass links so beloved of American major winner Rich Beem, the 26-year-old Sharvin finished on nine under for the tournament and tied for 15th.

Waterford youngster Robin Dawson was next best of the Irish in a tie for 30th, with Shane Lowry, Padraig Harrington and Seamus Power well off the pace while Paul Dunne and Graeme McDowell failed to make the cut in Co. Clare.

Rahm won the title for the second time in three years with a 16 under par total but Sharvin was delighted to finish six shots adrift after a level par 70 on Sunday, his poorest round of the week.

He told RTÉ Sport’s Greg Allen afterward, “I felt I didn’t play much different from the first three days. I just missed it on the wrong side too many times, but all in all, it’s a pretty good week.

“It’s a step in the right direction for sure. It shows I can compete out here. My confidence has been pretty high, but it’s definitely going to boost that a little. It’s my first time being in contention on the European Tour so I’m proud of the way I handled myself on and off the golf course.”

Dawson’s Irish Open debut as a professional saw him hit a stunning 64 on Saturday en-route to a top 30 finish and a check for over $70,000.

“A couple of things didn’t go right; my second shot on 10 went the only place on the whole golf course where I couldn’t actually hit it, but I’m happy overall and it’s been a really good week. It has given me a lot of confidence and shows I can play with the top lads.”

Read more: Where to play golf in Ireland