Cardinal Desmond Connell, at the center of allegations of covering up sex abuses when he was archbishop of Dublin, has died aged 90. 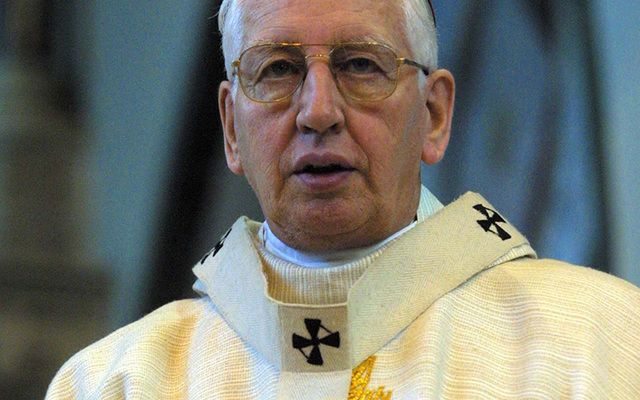 Cardinal Desmond Connell, at the center of allegations of covering up sex abuses when he was archbishop of Dublin, has died aged 90.

The Dublin Archdiocese said the former Catholic Church leader had been ill for some time. He passed away during the early hours of Tuesday in his sleep.

Connell was Archbishop of Dublin from to 1988 until 2004 before passing on to present archbishop Diarmuid Martin.

In 2009, Connell asked for forgiveness from child sex abuse victims who suffered at the hands of pedophile priests under his control.

He was heavily criticized when in charge of the Dublin Archdiocese for inaction and for making misleading statements in connection with clerical sex abuse.

In October 2002, an investigation called Cardinal Secrets on the Prime Time program on RTE contained accounts of children abused by Catholic priests serving in the Archdiocese of Dublin, where complaints had been made at higher levels and effectively ignored, both by the church and by the gardai.

This prompted a Commission of Investigation headed by Circuit Court Judge Yvonne Murphy. Her report found that Connell had handled the affair “badly” as he was “slow to recognize the seriousness of the situation.”

The report praised Connell for making the archdiocesan records available to the authorities in 2002 and for his 1995 actions in giving the authorities the names of 17 priests who had been accused of abuse, although it said the list was incomplete as complaints were made against at least 28 priests in the Archdiocese.

Connell was criticized for being economical with the truth about his knowledge of the abusive activities of priests under his control.

Just before his retirement, Connell asked at the Pro-Cathedral in Dublin for forgiveness from all those he had offended.

Connell was relatively unknown when nominated for archbishop in 1988. He had practically no pastoral experience, having taught for 35 years at the Metaphysics Department of UCD.

He was often charged with being out of touch with the realities of family life in a rapidly changing Ireland.

Professor Moore McDowell, a UCD economist, described Connell as “the wrong man for the job” of archbishop.

McDowell, who had worked alongside Connnell in academia, told RTE, “He had a long life and he lived it according to his own lights.  He was not the right person for the job but he did his best.”