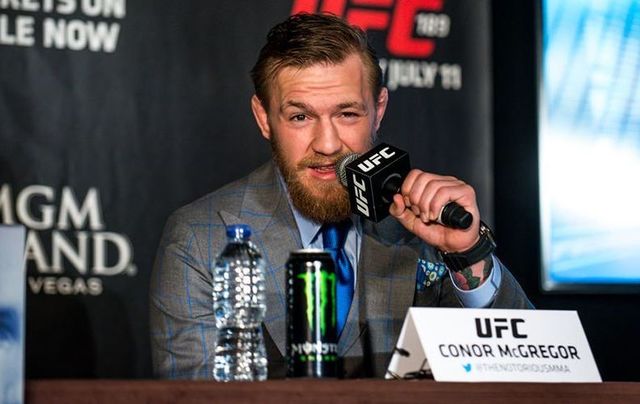 Conor McGregor, who has denied social media rumors that he was in a Dublin pub bust-up with an associate of a gangster, has been photographed whooping it up with two criminal brothers in London.

The MMA fighter was videoed by brothers Jonathan and Andy Murray throwing a wad of notes last week at a line-up of glamour hostesses at the exclusive Cirque le Soir nightclub.

One of the girls who served champagne to McGregor and his group was Kamila Kostka, who was born in Poland and grew up in Newry, Co. Down, before moving to work in London.

Kostka, who regards herself as Irish, told the Irish Sun she danced on McGregor’s table and the wads of notes he threw was “normal behavior” at the club.

The Mail on Sunday reported that the video footage showed the Murray brothers, 34-year-old Andrew and 27-year-old John, smacking the behinds of the girl hostesses and leering and making faces at them.

The brothers were also earlier the same night at the London Fashion Awards where they and McGregor, a friend since childhood, mixed with celebrities.

McGregor was photographed cozying up to singer Rita Ora. She posted a picture of the pair on social media and dubbed it “date night.”

Later she apologized and said she didn’t mean to offend McGregor’s girlfriend Dee Devlin when she was accused of “disrespecting” his sweetheart.

The Murray brothers, from Crumlin, Dublin, are part of the fighter’s entourage and flew to London with him in his private jet. They also traveled to Las Vegas for his fight with boxer Floyd Mayweather earlier this year and then partied with him after he lost the bout.

The Murrays have a string of convictions between them. Jonathan Murray was jailed for 18 months for his part in what was described in court as a “sickening” attack on a man in 2012. He also has 48 previous convictions, including four for drug dealing.

Andrew has 18 previous convictions which include possession of drugs for sale or supply, theft, forgery and public order offenses. When he was convicted of unlawful possession of drugs in 2014 he was photographed giving the middle finger to the camera.

A few days before the London outing with his pals, McGregor was fined €400 at Blanchardstown District Court in Dublin for speeding.