"Farrell conducts himself with his usual grace throughout the proceedings, hitting every note as he grapples with Washington's increasingly erratic performance." 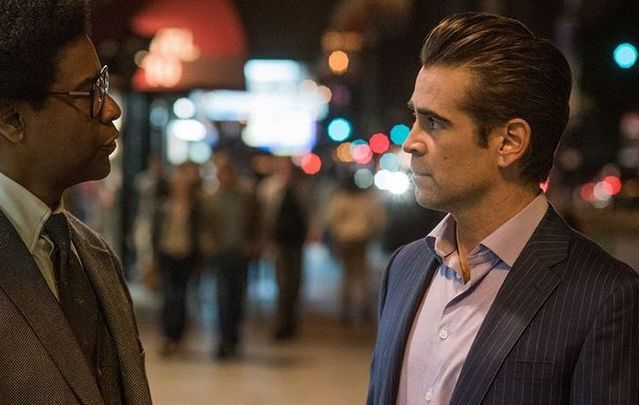 The best thing that ever happened to Colin Farrell was the life changing disaster that was his sword and sandal epic Alexander.  On paper it was supposed to be his breakthrough, the film that was predicted to rocket him into the stratosphere of leading man celebrity.

It bombed. Actually bombed is an understatement. The 2004 film which also starred Angelina Jolie cost an eye-watering $202 million to make and lost $71 million after all was said and done. Oliver Stone's three-hour biopic about the legendary Macedonian king was a bloated mess, weirdly edited and pathetically coy about his subject’s well-documented sexuality.

Farrell looked at sea throughout most of it, wearing the kind of blond wig that would have been more suited to the heyday of glam rock than the fourth century.

But what that spectacular turkey did was cure him of his own accelerating hubris.  It stopped him in his tracks and put his life and career on a time out. At the time he vowed that he would soon quit film making.

He couldn't see it then (and he still doesn't always see it now), but in giving up the rock star trappings of top-tier Hollywood fame Farrell found himself available to pursue scripts that were much closer to his heart, with the added benefit of inspiring performances that have established him as more than a dashing male lead. They have also demonstrated he's a formidable artist.

In Bruges, The Lobster, The Killing of a Sacred Deer, and soon Widows with director Steve McQueen followed, along with the kind of breathless critical plaudits he never saw in his earlier incarnations. So not only has his career been saved, it's been enhanced, which is something close to miraculous is Tinsel Town.

In his latest, Farrell plays the kind of wounded idealist he actually is in Roman J. Israel, Esq. which opens on November 17.  In the film he plays George Pierce, an ambitious attorney who runs a highly successful practice but who is nevertheless co-opted into helping a friend close down another legendary legal practice after the untimely death of its civil rights icon founder.

Denzel Washington plays one of the old fixtures from the about-to-close legal firm, an antisocial savant who, it turns out, actually did the grunt work on each case, aiding the prosecuted in the Los Angeles criminal court system and failing to look out for the company's bottom line.

Roman represents principal over profit, a throwback to the right-on idealism Farrell's character used to believe in before the world and its grubby mitts got its hands on his heart and head.

Things really come to a head when Roman, suddenly jobless, is recruited to join Pierce's cutthroat law firm, leading to a turbulent series of events that put the activism that has defined Roman's career to the test.

Washington transforms himself physically in the role, taking the kind of deep dive into characterization that echoes Dustin Hoffman's spectacular transformation into a eccentric savant in Rain Man.

It works and it does not work, however. First of all the script is overburdened by so many layers of metaphor that you start to wish the writer had surfaced for air for a bit.

Worst of all, we see Roman make a fateful decision that seems strikingly out of character right at the start, setting up a chain of events that plays out through the films and that you could see coming from space.

Farrell conducts himself with his usual grace throughout the proceedings, hitting every note as he grapples with Washington's increasingly erratic performance, which is mannered and interior and full of eye catching ticks, but all of this serves to make Roman completely unapproachable and more than a little bit of a pill (not someone you to want to spend a minute with never mind two hours).

Washington is a gifted performer, but this film takes aim at too many marks and hits none of them. You'll have checked your watch long before the big moment the film has been building toward finally unspools, with its haunting singing reminding us that we are witnessing something major, a grand denouement.

Instead though, you'll likely feel sad that one bad decision after a lifetime of good deeds can do the far-reaching damage it does. Roman J. Israel, Esq. wants to uplift you, but the truth is that its downbeat ending only brings you down.