Foreign Affairs Minister Simon Coveney, who is also tanaiste, has said that the credibility of Britain’s promise to avoid a hard border will be under pressure unless there is real progress on agreeing the Irish backstop by the end of Ju 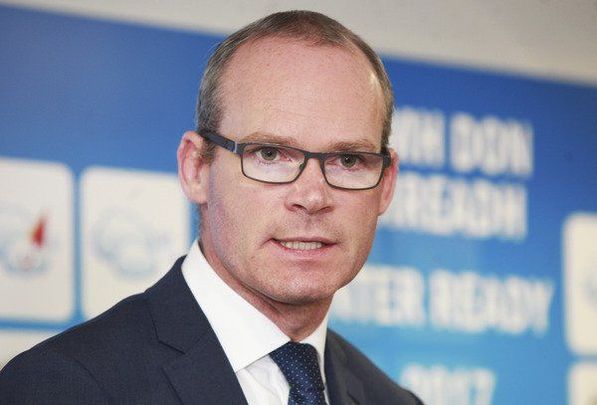 Foreign Affairs Minister Simon Coveney, who is also tanaiste, has said that the credibility of Britain’s promise to avoid a hard border will be under pressure unless there is real progress on agreeing the Irish backstop by the end of June.

Coveney said there would be “a difficult summer ahead” if there was not sufficient progress on the backstop issue.

His observation, following a meeting with EU chief Brexit negotiator Michel Barnier, came after he was accused of belligerence and Brit-bashing by MP Sammy Wilson, one of the 10-strong Democratic Unionist Party (DUP) representation at Westminster which is supporting British Prime Minister Theresa May’s Tory government.

May has been struggling to reconcile opposing camps in her cabinet over what kind of customs relationship will exist between the EU and Britain in the future.

Coveney said nobody expected the border issue to be fully resolved by the end of June, but time would be running out because clear legal texts on the backstop had to be in place in time for the treaty which guides the U.K. out of the EU. This is due to be concluded by the end of October.

Coveney called for “new thinking” from the British government, which could give rise to what he called “a shared customs territory.”

He added, speaking to reporters in Brussels, “I don’t think it’s any secret that the Irish side would like to see Britain and the EU sharing the same customs territory in the future.

“It would make a lot of the other problems, that are difficult to solve right now, easier to solve.”

He emphasized that a backstop agreement would ensure there would be no border infrastructure of any kind, and that there would be no checks and controls on the island of Ireland, thus maintaining the integrity of the Good Friday Agreement and the peace process.

He claimed on BBC’s Andrew Marr program on Sunday that a seamless border was the only answer to protect the Good Friday Agreement. Wilson said Coveney was “belligerent, interfering and Brit bashing.”

He claimed the Irish minister was using Brexit as an “excuse to break-up the U.K.”

Wilson said, “The fact is that the border issues can all be dealt with by technology but Coveney and co have stuck their heads in the sand, refusing to even consider this solution.”